Plans are still on to bore the holes either Saturday or Sunday, weather permitting.

It was 96* here today, and the NWS is forecasting 94* on Sunday....BUT.....There;s some weather forming up right now, the winds have picked up, the temperature is falling, and the barometer is 29.85 and rising. The lightning detector has been going off sporadically, indicating distances of 15~30kM, and I've seen lightning in the distance. So we'll see!

There's still plenty to do, and one of the tasks on the punch-list was getting the cable entrance finalized, and installed. It was originally going to have a single connection to the wire antenna, and have the Choke Balun/Line Isolator inside. and the control cable for the autocoupler.

It looked like this, before 'mission creep' set in: 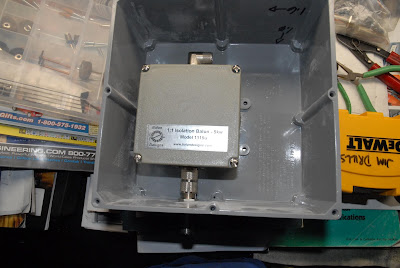 SO.....the Line Isolator has been removed from the outside-of-the-house enclosure, and has been relocated to the enclosure for the SGC autocoupler, as close to the input of the tuner as possible. The "permanent" 20 Meter vertical was also being put through it's paces and measurements during this learning period, and it has a Home Brew choke balun that looks like this: 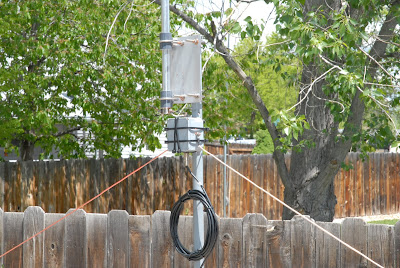 Quite simple, almost 'free', and very effective. Just a coil of coax, nicely wound (NOT "Scramble Wound"), and secured to the antenna as close as practically possible to the feedpoint.

So the vertical is proved in, and will get mounted to it's new 4x4 post in the next week or so. It'll just get removed from the tripod, and attached to the post as-is. It works. It ain't broke. I don't need to "fix it", and the only way to "improve" it would be to raise it higher and add another radial or two.

Well, I got off-the-dime last week, and finished making some more back-up plates to support the connectors in the box. 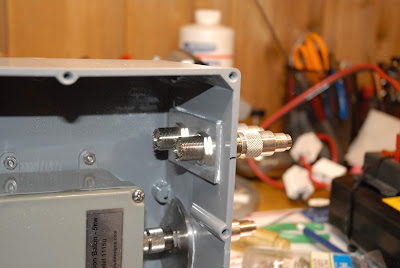 Lather, rinse, and repeat until both boxes have four of these connectors in them. Oooops.....didn't take any pix of them before I mounted them outside and inside 'cuz I was on a roll! 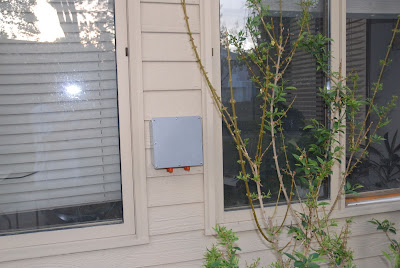 From a bit further back: 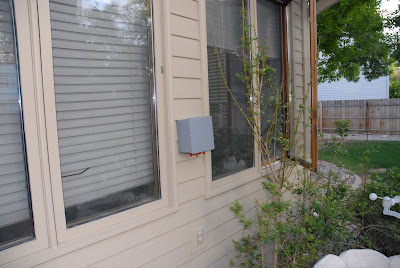 And on the inside: 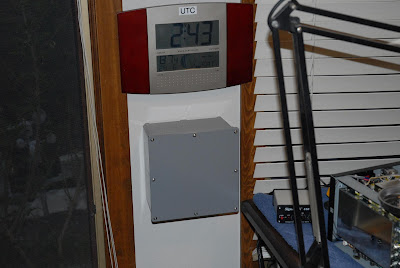 The connectors are on the bottom of the enclosures for weather proofing and appearance reasons, and wonder of wonders.......I was within 1/8" of getting things to line up perfectly.

So this item is pretty much crossed off. I still have to make four RG-8X 'jumper cables' to pass through the wall and a few dozen other things to do, and the poor Supra still has the winter dust on her.

Gotta get back on that car! Winter caught me off guard last year, and now I have to get that Supra Swing back.....
Posted by drjim at 9:30 PM