Well, I got really tired of not being able to use 40 Meters (7~7.3MHz) on this radio, so today I hoisted it off the operating table, had my wife lay a nice fluffy towel on the table, and then grunted this 50-pound beast back on the aptly named "Operating Table".

Off with the covers! 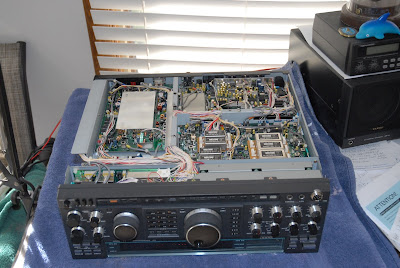 This thing is wall-to-wall packed under the hood(s). From the symptoms the radio shows (looks like power recycling or something pulling a logic bus to zero causing a reset), I went through the schematics to see what got switched, and when. A few weeks ago, I "crept up" on what frequency this odd behavior at, and what frequency it stopped at. I started at 4Mhz, and began tuning up. As soon as I hit 6.5MHz, the radio clicked when it switched filter banks, and started acting up. Coming down in frequency, it started acting up at 7.5MHz.

Gee....that pretty neatly brackets the 40 Meter band. What gets switched when it hits these transition frequencies between "General Coverage", and "Amateur Radio" frequencies? Hmmm....the only thing like that is the Low Pass Filter assembly on the output of the transmitter. Groan....that's on the top side of the radio. Have to flip this beast over again. While I had access to this side of the radio, I turned down the volume on the "Button Press Beep", which was annoyingly LOUD. Now it's a nice, reserved 'beep', letting the operator, and not everybody in the house, know that a button has been pressed. 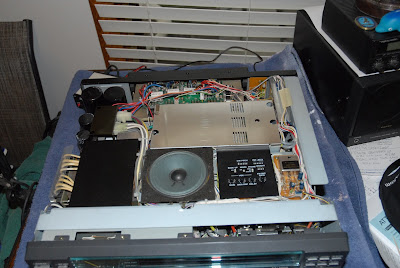 The Low Pass Filter assembly is in the metal shield can behind the speaker. Let's pop it open! 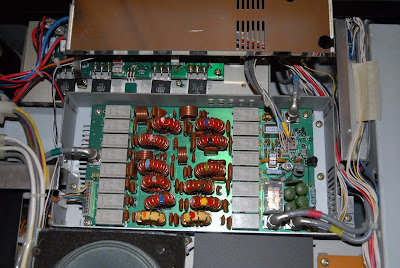 The coils and capacitors that make up the individual filters for each frequency segment are in the center of the board. The small, grey rectangular boxes are relays, one for the input, and one for the output, that select each one of the eight filters on the board. The large grey cables with silver connectors are the RF cables into/out of the board. On the lower left corner of the board is a small, plastic, multi-pin connector with the wires running to the aptly named Control Unit, which tells what relays to activate. AH!!  A place to split the circuit! Pulling the connector out would remove all the incoming control voltages to the board, resulting in it going into bypass, or "General Coverage" mode. I pulled the connector and inspected the female connector sockets, and the male pins on the board, and all looked well. No pinched wires or chafed insulation, either. Turned the radio on, tuned through the band, and it worked! No clicking, clacking, and resetting. OK! Plug it back in to confirm the problem is indeed with this assembly, and ........uh-oh.....it still works fine, and now when I tune through the previously wonky frequency range, it continues to work, and now I hear the relays click in at 6.5MHz, and drop out at 7.5MHz, just like it should.

RATS! But Jim, didn't you just "fix" it? No, because I didn't find out what "it" was. There's always a possibility that removing and reseating the connector (a very common practice) cleaned off some corrosion through the 'wiping' action of the contacts, or that the connector wasn't seated properly to begin with, but for now I have to write this off as a "No (Hardware) Problem Found", and consider it one of the dreaded "Intermittents".

I still have several issues left to resolve with this radio. Four of the buttons don't work on the panel, meaning I can't 1)monitor my own transmitted audio, 2) get the second receiver to function other than as the "B" VFO, and 3) & 4), the rapid tuning "Up" and "Down" buttons don't work.

All four of the buttons share a common wire/path/circuit board trace on one side, so a fault on that one line takes all four out. Could be (another) connector issue, a "wire" issue, or a cracked/damaged printed circuit board trace or "via" between the two layers of the board.