Yeah, like I really need another project. But, like Phil at Bustedknuckles, it was "An Offer/Counter Offer I Couldn't Refuse".

Well, I suppose I could have, seeing as I made the first offer, and the seller responded quite reasonably.

This thing had been languishing on eBay for several weeks, with a bunch of watchers, but no sale. It was at a decent price ($350), but the shipping on it was $145! I low-balled him at $175, and he came back with $250. I countered with "Split The Shipping?", and he responded he would. Ruh-Roh! Well, I agreed, and it arrived today. 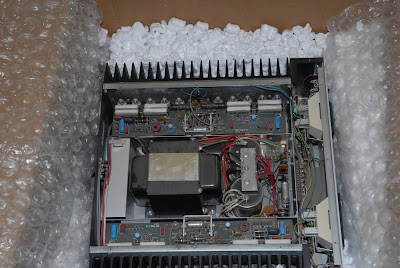 One of the reasons the shipping was so high, is that it's another "Analog Godzilla" like the Yaesu, and it weighs in at Sixty Pounds. Definitely a Heavyweight Contender, as all it is, is an amplifier. No tone controls, no equalizer, no speaker or input switching, just a big honkin' stereo amplifier, rated at a very conservative Two Hundred Watts per channel at 8 Ohms. Recent lab tests have shown these really put out more like 275 Watts at 8 Ohms, and 350 Watts at 4 Ohms. 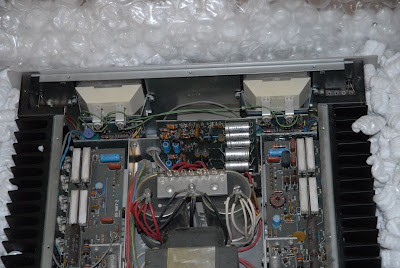 It's built like an Iowa-class Battleship, and I'll bet the power transformer weighs at least thirty pounds. The only option available for these amps Back In The Day was a set of power output meters, and this one has them. You can see the backs of the meters in the picture above, and the front panel in the picture below. 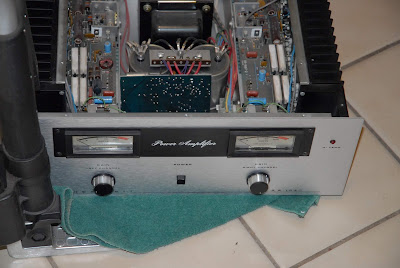 Saying it's "Just An Amp" is a bit like saying a Dodge Demon or Hellcat is a good grocery getter. It's a stupendous amp in terms of clean, wideband power output, and is perfect for driving inefficient speaker systems.

It was listed as "Won't Power Up", and when I closely examined the listing pix I saw the fuse holder was missing! Since I don't smell or see anything burnt/crispy/vaporized, it's in very good cosmetic and mechanical condition, and it uses an usual type of fuse holder, I'm rolling the dice that it'll work after I replace the fuse holder and do some resistance checks.

Anyway...this will get all the electrolytic capacitors replaced, the output connections for the speakers will be replaced with "5-Way" binding posts, all the connections will be tightened up, the gain controls cleaned and lubed, and I'll give it a very good cleaning.

For now it's sitting over in a corner of the downstairs storage area. I have too many other projects ahead of this one, but seeing as these have reached Cult Status, and go for upwards of $1000 all shined up and ready to go, I couldn't pass it up for $325.
Posted by drjim at 6:31 PM