But it's not serious, more like #672 of Mr. Murphy's famous laws, along with their various corollaries and sub-sections.

I started putting the foglamps back together so I could "bag 'em and tag 'em" until I get the rest of the front-end finished, and need to install them.

Cleaned up the wiring harness assemblies the other night. 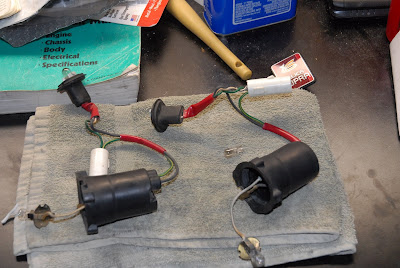 And then fed them through the buckets to where they will mate with the reflector/lens assembly. 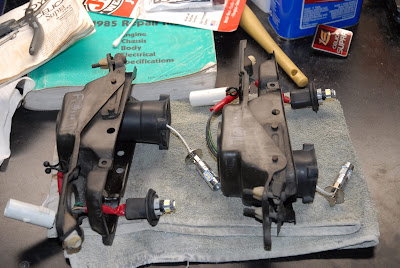 Took all the masking tape off the reflector/lens units, and cleaned the glass. They both had some kind of overspray that came right off, but the fronts of the lenses are "micro-pitted" with many, many tiny stone hits. I may or may not try and polish the lenses. They're in the grille, at knee-height, and unless you get right down there and look, you'd probably never notice it. 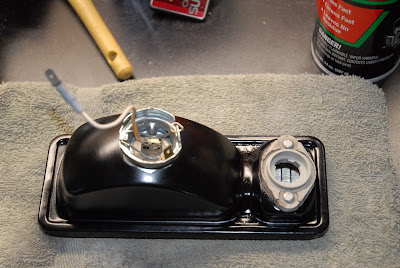 And that's when Mr. Murphy made an appearance. Something I hadn't considered when I shopped the LED replacements for the OEM H-3 Halogen bulbs, was what their overall length was.

This picture below shows it all. The clear glass bulb is the H-3 unit, and the depth stem of the caliper is set to the distance from the bulb flange to the internal baffle/light shield.

Yup.....the LED replacement is about 8mm TOO LONG to fit into the housing. 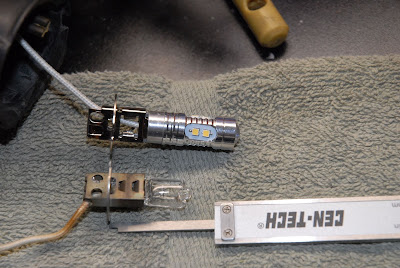 So, after spending about 30 minutes searching around, I found replacement "H-3" LED units that are only about 1mm longer than the Halogen bulbs. So, until they get here and I can wrap this small sub-sub-sub-project up, they're back to "Awaiting Parts" status.

So rather than let a nice Friday night in the garage go to waste, I put in all sixteen screws that hold the sunshade to the spoiler, and put the spoiler back on the car.

What is it with Japanese Engineers? Do they all have a "Small Fastener Fetish", or is it a cultural thing? Sheesh....sixteen screws to hold the sunshade on. Maybe some of the "downforce" these things are supposed to generate is caused by the weight of all that hardware...... 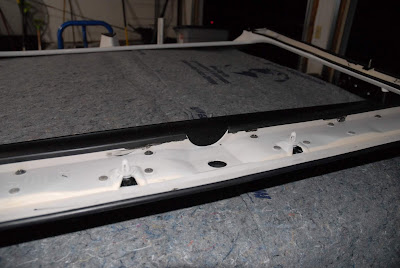 So I then maneuvered it around a bunch, and plopped it on the car, where after a small amount of wiggling, all 8 mounting studs dropped through the holes in the hatch, and I started the nuts on them.

Yep...this is what the rear end of a 1985 Toyota Celica Supra "P-Type" is supposed to look like. 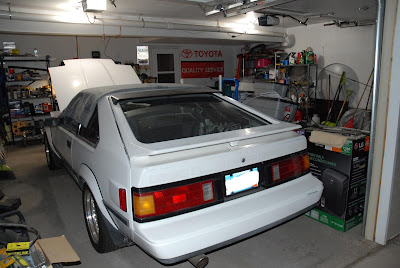 A bit of fettling to get the spoiler and gasket all tidy, and I torqued the nuts to 15 ftlbs, and stood back. 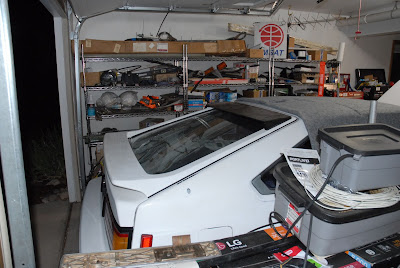 This assembly had been off the car for about three years now, and it's good to see it back on, as it's the only major thing that differentiates the 1985 from the earlier years of this model. The 1986 (six months only) had a third brake light added, but was otherwise identical to the 1985. With only 28,000 made, they're the lowest production run, so if you see one with a rear spoiler, either the hatch has been replaced with one from a 1985, or you're looking at one rare MKII Supra.

With the exception of mounting the antenna, the rear section is pretty much finished for now. Pulling the hatch to repair the surface rust on the leading edge and the upper jamb area can wait until Spring. This will allow me to concentrate on getting the front finished, which still needs a lot of work. The last big push will be to sand out, repair/fill the crazed areas, sand some more, and then prime and paint the front bumper cover. Then I have to clean/refurb the turn signal/side marker lamps, and put it all back together!

I can take it out while the weather is still pleasant, and then gunk the engine bay again,  drain the coolant, possibly flush it, and then put her in the garage while I start taking the front of the engine and the intake manifolding apart to catch up on all that deferred, unknown status maintenance, like the hoses, timing belt, and fuel injectors.
Posted by drjim at 11:50 PM