It's raining cats and dogs here right now. Rate was was up to 1.5"/hr, and we've received about .65" since it started this morning. It's backed off to .45"/hr and the NWS radar shows the major portion of the storm has gone through, but there's another one right behind it.

We sure need the rain, but I hope it doesn't cause flooding. 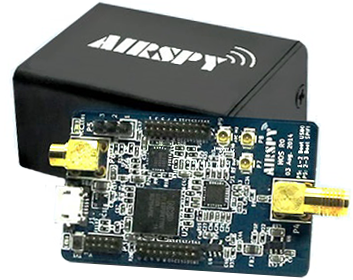 This one uses a 12-bit ADC, which gives it much better dynamic range than any of the inexpensive dongles have, and it's built into an aluminum extrusion with metal end plates, something lacking in both the SDRplay, and the vaunted HackRF One.

I haven't connected it to a PC yet due to some problems here. My KVM switch has failed again, and although this one has everything I want, this particular model just isn't very reliable. It's been "stuck" on the port for my Linux PC  for a couple of months, and I've tried everything I can think of to get it "unstuck". At first the mouse was acting strange, then the keyboard started giving me double, missing, or wrong characters. I wound up attaching a mouse and keyboard to the front USB connectors which made the PC reliable, and then it pretty much failed completely, with the buttons on the front panel becoming unresponsive. It still passes the video, but otherwise it's just a $125 lump. Replacing it with something different will require tearing apart about half my radio station due to the fact that I've got all the cables routed "nice and pretty". I'll probably just run a USB extension cable from one of the back ports on this (Linux) PC so I can try out the Airspy, and scratch my head a while longer on what to do about the KVM problem.....
at November 20, 2016