Did not happen today.

I dug out the bottom piece from the garage, only to find I've misplaced (what else is new......) the M6x8 bolt that holds it to the bottom of the antenna!

So, not having any metric bolts that size that fell "readily to hand", I made a run to Home Depot to get a replacement.

This issue with the antenna started sometime ago when I took down my Arrow Antenna GP52 6 Meter 1/4 wave vertical antenna and replaced it with my Comet GP-3 2M/70cm vertical so I could run the net from the shack, instead of using my Drake TR-270 which is in the living room on my wife's computer desk.

There were just too many times when people were over, or she was watching TV, and the "QRM" in the room was too high, and went out over-the-air, to properly conduct the net.

The GP-3 is a great little antenna, very rugged, and only 6' tall, meaning it doesn't really stand out in the neighborhood. The Drake is connected to it's little brother, the GP-1, and that's also an excellent antenna.

I'd been using the GP-3 at my apartment in Torrance before I moved here, and it worked extremely well. Back at the apartment it was on a 5' tripod, with a single 5' piece of mast, on top of a large two story building, with a clear view in all 360*. I could easily hit repeaters that were 70 miles away, and make reliable simplex contacts out to 30 miles.

Here at the house, it's on the same 5' tripod, ground mounted this time, with three 5' sections of mast, getting it well above the roof line with a clear view in all 360*. I'm even using the same length of coax, as it was "close enough" to being the right length, and was in excellent condition. The loss measurement for that piece of coax (Davis RF "Bury Flex") was as expected for the length, and the connectors were like new due to the fact I always properly weatherproof my connections on the outside ends.

I swept it with my Rig Expert AA-520 antenna analyzer, and the SWR was almost identical to the published curves for the antenna.

So I should be good to go, right?

Well, not really......The antenna just never "worked right", with receive being down from what it was in Torrance, although transmit seemed about the same. Now that's not really a good indicator, as I have a clear shot at the repeater, and can hit it almost "full quieting" with 5 Watts from my HT in the front yard. The problem came with simplex operation, when this higher gain (4.5dBi on 2M), physically higher antenna didn't even perform as well as the Comet GP-1 ("3dB" on 2M. No mention of it being dBi or dBd but I suspect dBi) on the other side of the house, and just barely clear of the roof line!

The only difference between the way it's mounted here at the house is when I swapped it out with the 6M antenna, I couldn't find the bottom "mount support pipe" piece, so I slipped it into a section of PVC conduit, and put it up.

This picture shows the metal piece, directly under the radials, at the bottom of the antenna:

And this is the actual item, measuring 245mm in length: 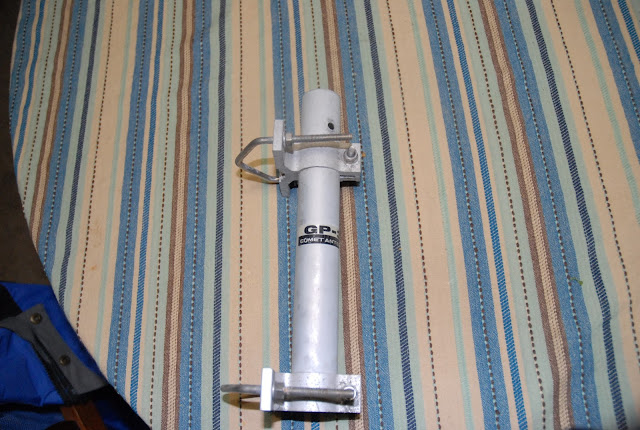 And since the radials are "too short" for doing much on 2M, I'm guessing that they're for the 70cm section of the antenna.

Guess I'll find out tomorrow when I put it back on the antenna!
Posted by drjim at 5:36 PM