The music video was found over on LL's blog, while the sign came from Common Sense Evaluation.


I just thought they kind of went togther..... 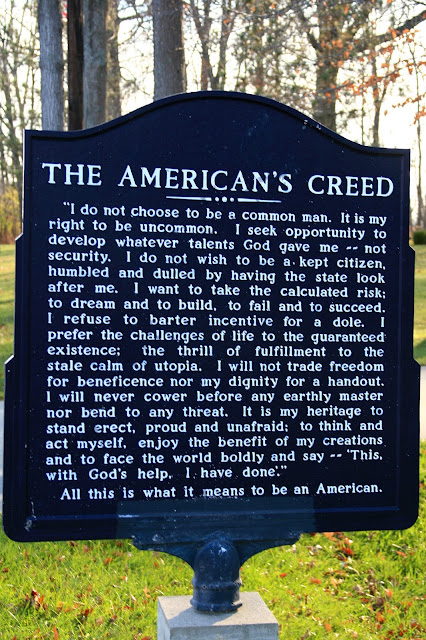 After doing some Googling for "The American's Creed", and finding several versions of what's been called "The American/s Creed", I found that this particular version was written by a man named Dean Alfange.

His brief bio here is from "Good Reads".


Dean Alfange was born in Constantinople (now Istanbul, Turkey) of Greek parents, December 2, 1897. His family migrated to the United States and settled in Utica, New York, when he was very young. He attended Hamilton College where he graduated Phi Beta Kappa in 1922. Later he attended Columbia University Law School and was admitted to the bar in 1925.

Alfange's interests led him to pursue a career in politics as well as law. He was also deeply involved with the Order of Ahepa, a Greek-American cultural organization, acting as its national president from 1927-1929. He ran for New York State Governor on the American Labor Party ticket in 1942 against Thomas E. Dewey and was a strong advocate of the New Deal and a great admirer of Franklin D. Roosevelt.

During World War II he was the Vice-Chairman of the Emergency Committee to Save the Jewish People of Europe. He made speeches for aid to the Jews against the Nazis, and at a hearing before the Foreign Affairs Committee in the House of Representatives submitted a plan to save the Jews in Europe. After World War II he became chairman of the Committee to Arm the Jewish State, a group aimed at lifting the arms embargo on Palestine.

He was instrumental in the formation of the Liberal Party in 1944 when the American Labor Party split between pro-communist and anti-communist factions. Alfange held nominations or appointments
from Democrats and Republicans as well as the Liberal and American Labor Party. As early as 1954 he expressed opposition to the American policy of military aid to the French government in Indochina, his position being one based on anti-colonialism. This position continued throughout America's involvement in the Vietnam Conflict.

Other positions held by Alfange were: Deputy Attorney General of New York State, Trustee of the Fashion Institute of Technology and New York State Quarter-Horse Racing Commissioner. Among his awards are the Freedom Foundation Award (1952) for his composition “My Creed” (included in Box 5, folder 3) and the Theodore Roosevelt Memorial Award for his book The Supreme Court and the National Will (1937).

This man helped found the modern "liberal" movement, which bears little resemblance to the "liberal" parties of today.

He's probably spinning in his grave like a gyroscope over what the "liberals" have become...........