HUGE Day on the Battleship Iowa

Since the Iowa Hawkeyes are in the Rose Bowl this year, an estimated 25,000 Iowans came to L.A. to support their team.

And it looked like about half of them came down to the Iowa today for the rally!

I've seen big crowds at the Iowa before, but I've NEVER seen the entire parking lot, and the cruise ship parking lot, so full that the police blocked the entrance, and people were parking blocks away.

This is what I saw when I was finally able to get into the parking lot and find a space: 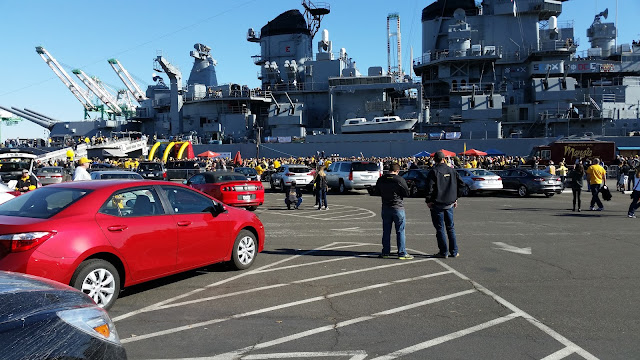 It was wall-to-wall people, spilling over onto the road in front of the ship. and requiring the security staff to "make a hole" for vehicle traffic.

And every single person was happy and smiling, and there were NO "incidents" of any kind!


This was taken later in the day, after the crowds had (somewhat) diminished, but as you can see, we still had quite a large number of people: 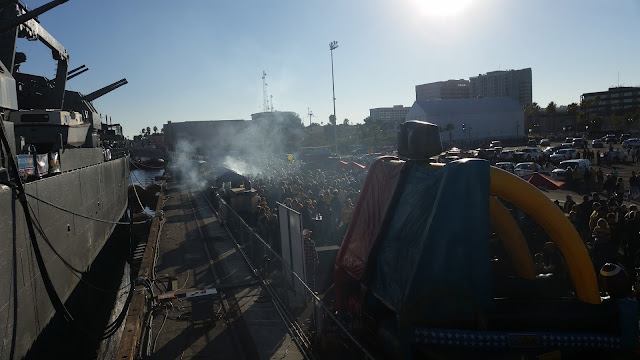 We even kept the ship open an hour longer so that everybody (as far as I know) who had been in line to get aboard at least got to see some of the ship.

So, a big THANK YOU to the wonderful people from the state of Iowa who helped make it possible to get the ship down here, and we hope you all had a great time!

Thank you all for your support, HAPPY NEW YEAR, and GO HAWKEYES!
at December 31, 2015