THIS Is Why You NEED External Filters With "$20 SDR Receivers"

By now you're all used to me harping about how while these little $20 dongles are interesting, they need some external help to make them useful in real world situations.

WELL.....here's a little proof of what happens when strong signals outside of the passband of your interest occur, and I wasn't even using my "$20 RTL-bought-on-eBay" little stick radio. I was using my "$200 FUNCube Dongle", which has better RF performance. I'll try the $20 unit, but I'm pretty sure I know how that will turn out.....

I was setting up to record a pass of one of the NOAA APT weather satellites, and man, was I getting clobbered with out-of-band signals.

This screenshot shows what I was hearing while waiting for NOAA-18 to come up over the horizon: 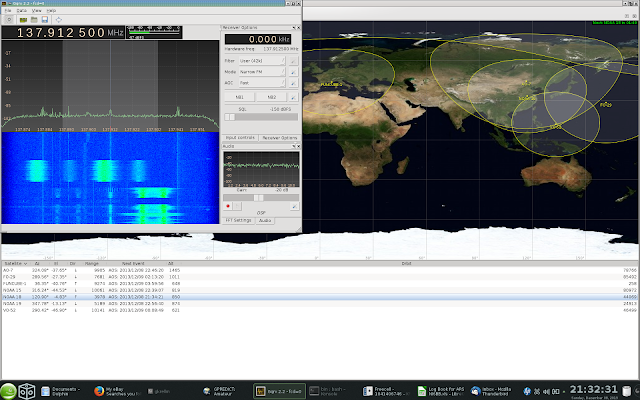 I'm not sure what the one right on the center is, but the one off to the right a bit is a paging transmitter. It was so strong, I could clearly hear it, and since I know what they sound like, that's how I know what it was.

One of the times it broke through I could also hear FM modulation riding in along with it, and it was a person I know on the 145.380 MHz repeater.


VHF paging transmitters operate in the 152~158 MHz range, TWENTY MHz removed from what I was trying to receive!

This would be COMPLETELY unacceptable performance in a "real" receiver, but I guess since these little guys are so doggone cute, cheap, and (relatively) easy to use, most people give it a pass.

Here's another screenshot of the actual satellite pass, again with extraneous signals shsowing up: 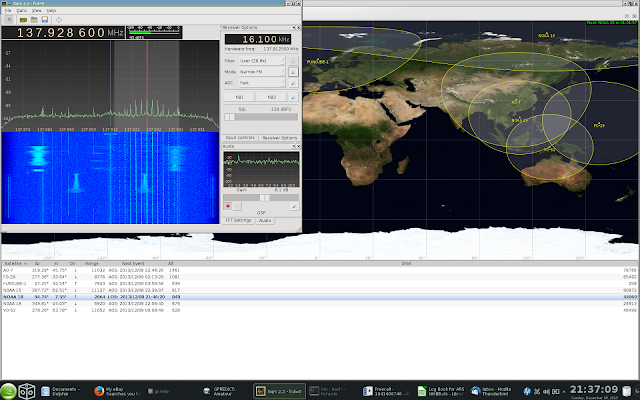 If you look at the waterfall, you'll notice that each of the non-desired signals also has a "mirror image" of itself higher in frequency, a sure indication that these are internally generated by cross-mixing with other signals that don't appear in the passband.


Where and how these spurious signals get generated is beyond this little blog post, and it can get quite complicated, so I wont go into it here.

Well, for casual use, it's rather annoying, but if you jump on the "ZOMG!! A $20 DC-TO-DAYLIGHT SPY/INTERCEPT/MAGIC RADIO!!!!" bandwagon, like I see being promoted on several "survival radio" websites, you're severely deluding yourself.

If you're using these to listen to transmissions, you might be able to tolerate an occasional loss of audio due to something big clobbering the front end of these little radios. After all, the "Between-The-Ears DSP" that God gave us can do remarkable things to fill in the blanks, as anybody who knows and uses Morse Code can tell you.

If you're using these things to decode transmissions, then all bets are off.

You WILL suffer data loss, dropouts, and other mysterious artifacts if you use these things "As Is".

The recording of the pass I was trying to capture when the paging transmitter fired up was useless to decode, and that's after I spent some time over the last week or so playing with all the software adjustments that give you a certain amount of control over how these operate.

They're very sensitive to the amount of RF gain dialed in, and will go from being usable to being overloaded easily.

The fact is that these things were not designed to be wide-range surveillance or communications receivers, and they have definite shortcomings for that use.

The same thing occurs with most of the newer, wide-band hand-held transceivers  being sold today. My old Radio Shack HTX-202 2 Meter only hand-held was pretty much immune to any out-of-band interference, while my newer radios will definitely take a hit in performance when in the presence of very strong out-of-band signals.

It all comes down to the amount of discrete filtering on the front-end of the radio. Very small radios are difficult to impossible to stuff full of the coils and capacitors need to make effective bandpass filters that protect the front end from getting hammered by RF.

The preamp I have mounted at the antenna is an exceptionally good one, with a very low Noise Figure (about .7dB, measured), and also has *some* helical filtering in it, but it's not very much, and since I'm using it well outside of it's design parameters, it might not be helping very much.

So, until I can come up with a specific, dedicated filter and preamp, I'll just have to put up with the fact that a $20 dongle radio cannot perform as well as a "real" radio for certain uses.