Got home from work and some errands just in time to catch the last "good" pass of NOAA-18 for the day.

I fired up my "Daily Driver" Linux box, and started the GPredict satellite tracking program. Since I already had the three operational NOAA satellites loaded, I saw that NOAA-15 was overhead, with NOAA-18 a minute or two behind.

Since I wouldn't have time to power up the Windoze 7 PC I normally use for my Ham Radio stuff, I took a chance and launched Gqrx, an SDR program that will work with either a FUNCube or RTL dongle. Since I already had the FCD plugged in, I set the mode to Narrow FM, and tuned to the NOAA-15 frequency of 137.620 MHz.

Since Gqrx either didn't remember the settings I used for the APT satellites, -OR- I had changed them, it took a minute or so to get them sorted out. There's an "APT" selection in the available filter parameters, but it's only 17.5 kHz, so I grabbed the filter window edge with the mouse, and stretched it out to 40.8 kHz, wide enough to cover all the "tracks" in the waterfall display, but not so wide as to let other signals in.

This screenshot was taken during the pass after I had everything set up, and was satisfied it was recording: 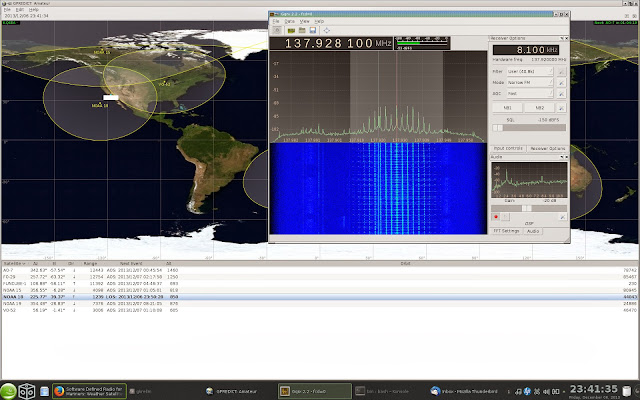 When the pass finally got weak, I stopped recording, opened Audacity, converted the stereo recording to mono, and resampled it down to 11025 kHz.

Then I fed it to WXtoImg, and it decoded clean!


This is the first decode, called "Normal":

The "steps" or "jumps" in the gray-scale data blocks along the edges are most probably caused by my manual adjustment of the Doppler as I was recording the audio.


Here's one in color, produced by using the information in each of the two pix above, along with certain data sent down: For the sailors out there, here's the sea surface temperature: 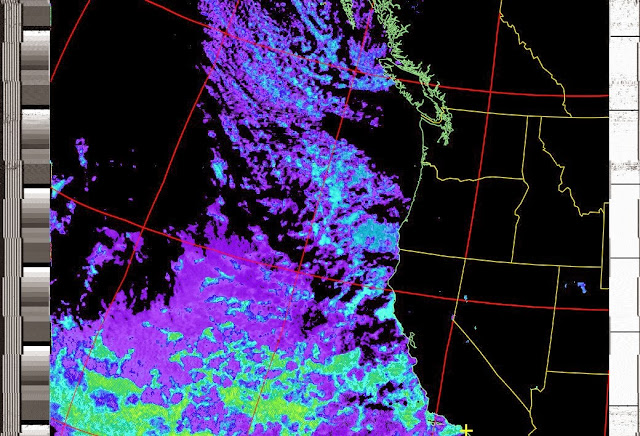 And lastly, here's one called "Thermal": 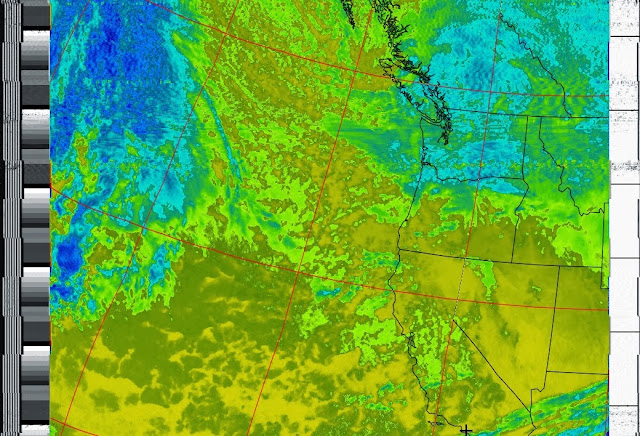 There are a bunch more "Enhancement" options available on the version of WXtoImg that's on my Windoze PC, as that's a "paid for" registered version, while the Linux version is "freeware", and doesn't look like it even has a place to enter a registration code, so WYSIWYG!


I'll try to use the $20 RTL dongle on the next pass, about 40 minutes from now (0105 UTC), and see how that one receives. Since I now know how to change the "front end" sample rate on the RTL unit, I can cut down on the amount of spectrum it samples and converts, making it easier to tune the unit, and cut down on signals I *don't* want to receive.

I won't have time tomorrow to record any passes, as I'll be on the Battleship Iowa all day operating the Amateur Radio station for Pearl Harbor day, but I'm sure going to try and snag some nice, full passes on Sunday!
at December 06, 2013