After penning my diatribe about badly these "SDR Dongles" need some front-end filtering, I noticed NOAA-15 was coming up with an almost overhead pass. Passes this high in elevation have very strong signals, and by turning the RF gain (software) control down quite a bit, I started recording the pass as it came over the horizin.

I was still seeing phantom signals in the waterfall display, but with the RF gain turned down, they weren't as bad, and none of them "broke through" and completely wiped out the receiver.

Here's the image, in what the decoding software calls "MCIR_Color" format: 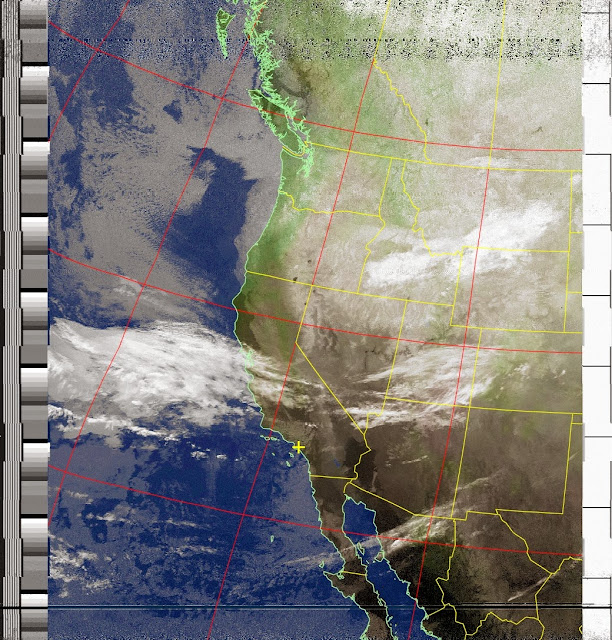 It's no too bad, and the "Noise Bars" at the top are caused by nulls in the antenna pattern, where the antenna gain drops off. Due to where my antenna is mounted, and other factors, I don't get a strong signal at low elevations to the South, so the image doesn't extend very far South.

The black band running across the picture towards the bottom is the result of a strong signal blocking the receiver. Even with the RF gain cranked down to the point where I thought I might not get anything, something still clobbered the front-end of the little radio.

With a better mounting of my antenna, and some additional filtering in front of the receiver allowing me to turn the gain up a bit, I should be able to get almost horizon-to-horizon coverage.

Still, this one came out pretty well, and I was surprised that I was able to get something this good with the RF gain turned down so far.
at December 08, 2013