JOTA On The Battleship Iowa

Well, we had an excellent time today, and had several dozen Scouts (out of a total of almost 100! Most were mike-shy, and didn't want to talk on the radio) make HF contacts from the Iowa, working other JOTA stations in Washington, Oregon, Illinois (20 miles from my home town!), Texas, Mississippi, and Alberta, Canada. And we worked ONE station in the state of Iowa, who was ecstatic he was finally able to make a contact with us.

The HF station I took with me worked remarkably well, and except for one minor glitch (and dodged bullet), the BuddiPole/BuddiStick antenna and Elecraft Autotuner I built recently worked 100%.

HF Station on the Fantail 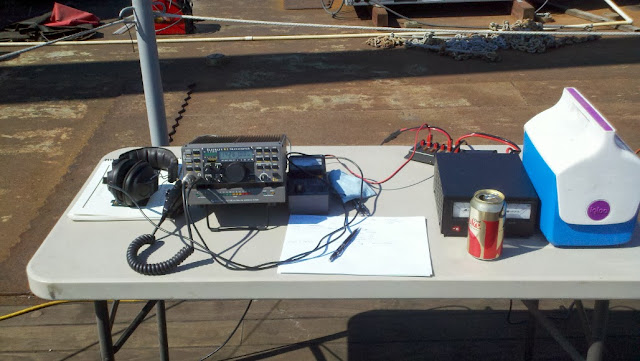 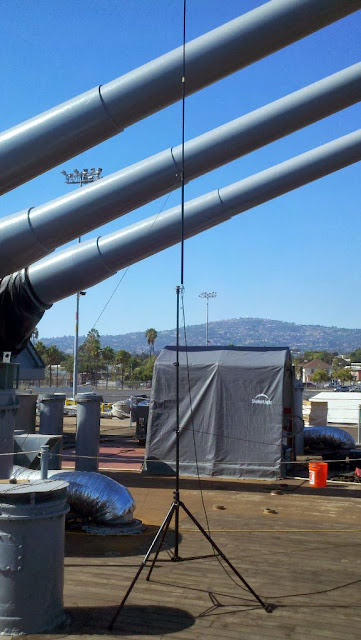 The minor glitch was a PL-259 Type-UHF connector I installed on one end of the feedline I made last night. After I had the antenna assembled, I was using my Comet Antenna Analyzer to adjust it for resonance in the 20 Meter band. I noticed that from time to time the VSWR was sky high, and the impedance was showing ZERO Ohms, indicating a short. I checked the cable with my DMM, and all seemed fine, and when I reconnected the analyzer, things looked OK. Well, during one of the "Adjust and Measure" cycles, I noticed that when I flexed the cable at the analyzer end, it would short out, and then return to normal when I flexed the cable a different way. I finally resolved the issue by bending the cable back on itself, and securing it with a cable tie.

I cut that end off at the end of the day so I'd be forced to more carefully install another connector on it, which I'll do after I finish this post!

If you look in the first picture, you can see that my little table is set up on the planking (Douglas Fir, NOT the original Teak planking), and just behind it is the bare steel deck where the planking has been removed for deck derusting, and eventual replacement.

Unfortunately, it's impossible to replace the planking with Teak, as it's an "Endangered Species", and to get "approved" Teak would be cost prohibitive. I'm not sure what they're going to use for the new planking. There's been some discussions on replacing it with more Douglas Fir, or perhaps using Redwood or Walnut, but the final decision will be cost and originality driven, so I'm betting on Douglas Fir. Quite a bit of the original Teak remains, and great pains are being taking to preserve it. The way to tell the two apart is to look for the grain of the wood. If you see the grain, it's Douglas Fir. If no grain is visible, then it's Teak.


Besides my little HF station, one of the other clubs had a VHF/UHF station set up for the Scouts to do local comms with. 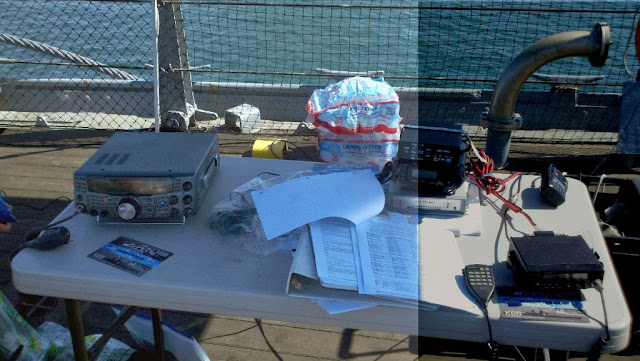 Sorry about the "split image" appearance. One side was in shadow, and my "GIMP-Fu" is not strong tonight, or I would have color-balanced it better.

The last of the Scouts departed about 1530, and then I broke down my station, packed it up, and lugged it off the stern "brow". 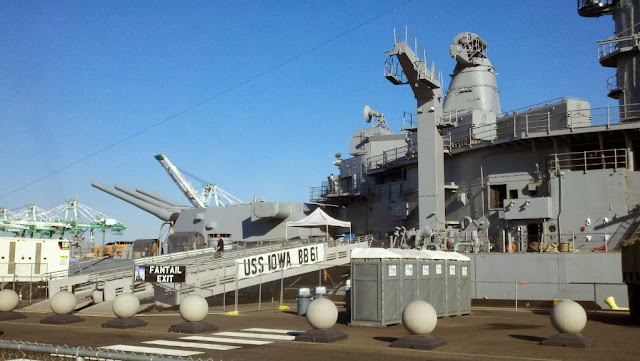 A Bit Further Forward of the Stern 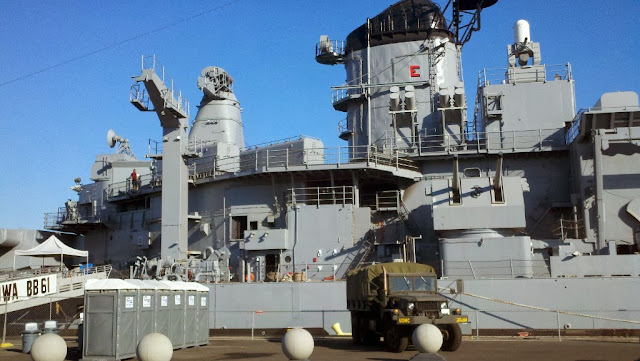 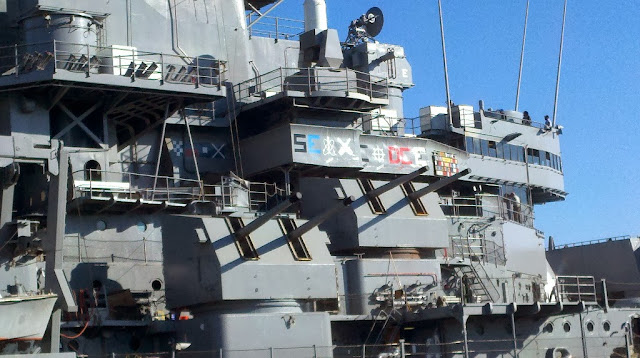 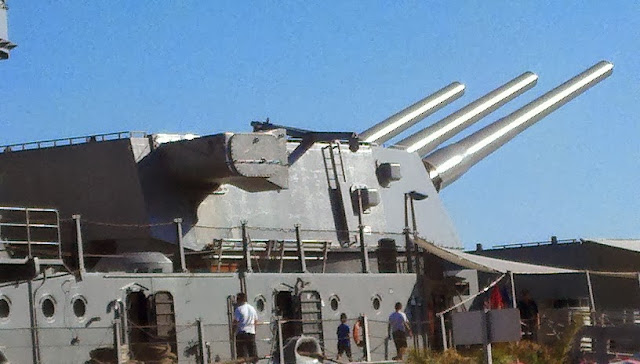 Sorry for the crummy cell-phone photos. One of these days I'll take my "real" camera aboard and get some decent pictures. One of the things I'm planning on doing next year after retirement is spending more time on the Iowa. We're going to get the Comm Center restored, and have the teletypes and Data terminals printing/displaying some simulated message traffic for when those areas are finally opened to the public.


Yours Truly on the Radio 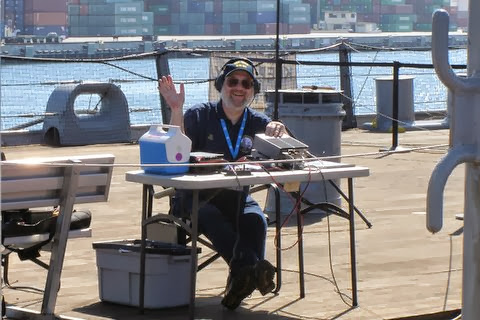