Well, I didn't get to do much work on it this weekend.

Saturday morning my radio club had the "First Saturday of the Month" breakfast, and then I spent some time talking to other club members about various projects we're all working on.

Got back from "breakfast" about 1030, and had some "Honey Dews" in the job jar that had to be done.

Late Saturday afternoon we went out for an early dinner at a little Mexican restaurant, and then we went to a movie.

Hmmmm....she lets me play radio, work on the garage to clean it up for another BIG upcoming project, never complains if I don't do the vacuuming on the appointed day or forget to empty/load the dishwasher, etc, etc, etc.

We went to see "Gravity".

DON'T waste your money on this movie!

It's so full of technical mistakes (the producer/director calls them "artistic liberties") that I found it rather uncomfortable to watch, being somewhat familiar with orbital mechanics and other "Rocket Science" stuff.

Plus, it has George Clooney (or is that George LOONEY?) in it, and I do not like paying to see this left-wing moonbat on screen!

But she enjoyed it, and she does so much for me that I really can't complain about going to certain movies with her.

Sunday started off fine, then her brother called to remind me I'd promised to fix his son's Onkyo home theater receiver that somehow managed to get a 1/4" headphone plug snapped off in the jack, disabling all the speakers, and most of the THX/Dolby/Surround Sound features.

That only took about 45 minutes to repair, but then we sat around yakking about all kinds of other stuff for another couple of hours, so most of Sunday was used up.

SO.....I was primed to finish this thing when I got home from work tonight, and finish it I did.

It was 95% or better completed, and all I had to do was find all my connectors and stuff to power it up, do some basic checks, and calibrate the VSWR bridge that's built into it.

And here she is, sitting underneath the Elecraft K2/100 radio I'll be using it with. 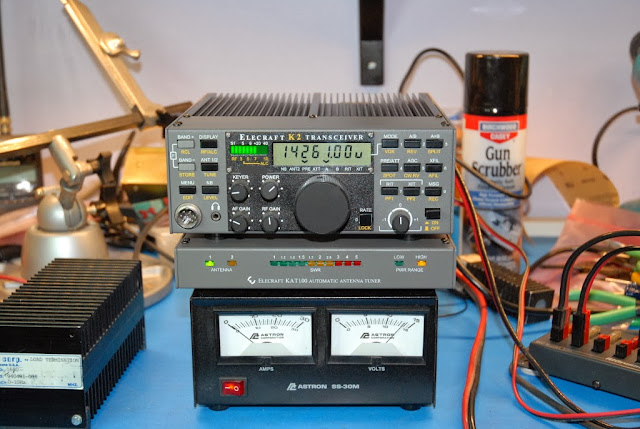 One thing I'd forgotten was that this particular Astron SS-30M power supply was really noisy on HF frequencies, as shown by the little green bargraph just to the left of the frequency display.

Normally, like when running on batteries or a "linear" power supply, AND with the antenna connected to a dummy load, the meter would indicate ZERO bars/segments being lit, and not an "S9 +20" noise level!

If the other supply is quiet, I'll pop the covers off both of them and check that this one has all the same components in it, and I'll try to silence this one.

Otherwise I'll just use the other supply when I operate the JOTA station on the 19th, and try and figure out what to do with this one.
Posted by drjim at 9:46 PM