Radio Weekend on the Battleship Iowa

As part of Museum Ships Weekend, one of the groups I'm with was able to secure permission to operate from the Comm Center aboard the Iowa this weekend.

I didn't operate the entire time my buddies were there as I'm still not 100%, but I put in about 4 hours Saturday, and 4 hours today.

We had a pretty good time, although Saturday was a bit uncomfortable, as the ship's HVAC system is non-functional at this time, and we had to rely on box fans in the hatches and passageways to blow some cool outside air into the spaces we were using. By 1400, we were all soaked with sweat, so I left early, came home, and took a nap.

Today was overcast and much cooler, so I was able to hang in there for over 5 hours, at which time we decided it probably wasn't going to be worthwhile operating until the end of the event, and shut down early.

We used pretty simple equipment, an Icom IC-718 compact HF transceiver, and LDG antenna "tuner", and the Discage antenna on the bow of the Iowa, and the "trussed whip" antenna located a bit further aft. 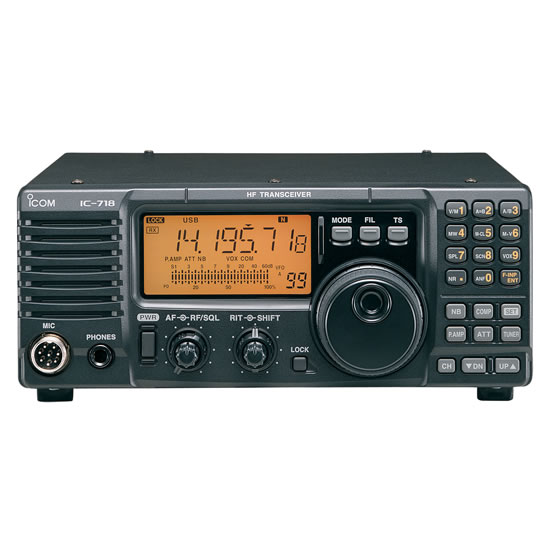 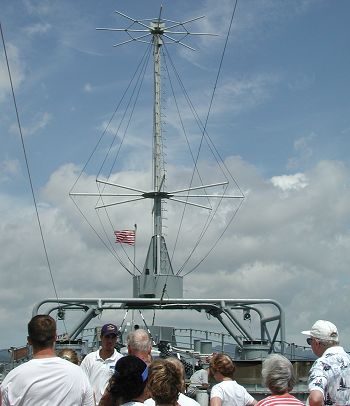 Here's an excellent article about the various  antennas aboard an Iowa-class battleship, courtesy of one of our sister ships, the USS Missouri.

We had a nice 30 minute "rag chew" today the The Mighty Mo, marking the first time we contacted her from the Iowa.

BTW....all FOUR Iowa-class ships were on the air this weekend, marking another first. Next year will be the 60th anniversary of the first time all four steamed together, and we'll be working up a big event for that!

The discage is a rather unusual antenna, in that it can be fed two ways. If you feed it at the junction between the "disc" and the "cage", it acts as an HF Discone antenna, and will radiate efficiently from 10 MHz to 30 MHz.

If you feed the lower cage portion against ground, it acts as a wide band monopole, and works very well from 6 MHz to 10 MHz.

Discones are more commonly used at VHF and above, and you've probably seen one, and called it a "scanner antenna". They don't have ANY gain, so they're not much better than a piece of wire, BUT they are remarkably broadbanded, often operating over 10:1 frequency range, making them very popular with scanner users.

I don't know for sure how many total contacts we made, but I logged almost 200 during the two days, and operated the radio for at least that many more.

The Iowa is a marvelous place. Every time I walk down a passageway, go up or down a ladder, or just sit in one of the spaces, I get an eerie feeling, almost like I'm being watched. Some of the other people who volunteer feel the same thing, and it's a reminder to us that we're merely stewards of the ship, and are just keeping it clean and well kept for the real owners, namely all the people who served on her, and gave her life, during the time she was a Ship of the Line.