Since this is a completely new (NOTE: Used parts involved!) tracking antenna system, I had to verify it would actually track one of the satellites I'll be using for Field Day.

The system consists of a laptop running satellite tracking software, in my case SatPC32, which can dsiplay either a "flat" map: 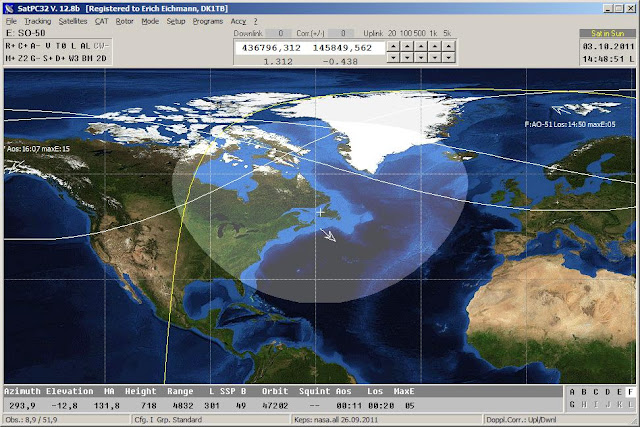 or a "3D" map of whatever satellite(s) you're tracking: 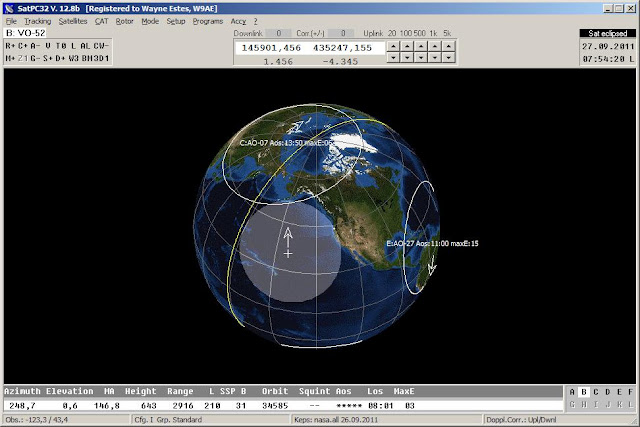 The tracking program does much more than just display the relative positions of the satellites in relation to a ground observer. It also sends Doppler corrections to the radio, and position commands to the rotator interface.

We've all experienced Doppler Shift before. I'm sure you've heard of the example where when a train (or car) is coming at you blowing the horn. As the train approaches, and then passes you, you hear distinct shift in the pitch of the tone. As the train is approaching, the sound waves are effectively "squeezed" together, shortening the time between them, and making the pitch (frequency) appear higher.

As the train moves away from you, the sound waves are "stretched" out, making the pitch (frequency) appear to be lower.

The ONLY time you'll hear the pitch the same as the train operator does, is when the relative velocity between you is ZERO.

Since we know the velocity of the satellite, and the velocity that we're moving along on the Earth, it's a simple ( you're kidding, right? ) matter to compute how much correction should be applied. The radio is connected to the laptop with a USB-to-Serial converter (the radio only has a serial port; the laptop only has USB ports), and the tracking program reads the radio's frequency, computes the required correction, and sends a command to the radio to tune to the new frequency.

In Ye Olde Daze of satellite operation, we all followed "The One True Rule for Doppler Tuning", and left the lower of the two frequencies alone, and tuned the higher of the two to make the correction.

What? TWO frequencies? Yep, satellite operation (at least on the Linear Transponder satellites) is "Full Duplex", like a telephone, meaning you can listen and talk at the same time. It's a bit weird at first to hear your own voice, delayed a small amount because of the round-trip distance between you and the satellite, but you quickly get used to it.

They way this is done, is to transmit on one of the VHF/UHF bands, and listen on the other, and this is not something your garden variety dual-band radio can do. Currently, there are only two multi-mode (FM, CW, and SSB) radios for sale that can operate on the Linear Transponder satellite, the Kenwood TS-2000 and the Icom IC-9100. There's a wide variety of used radios that work, like my Yaesu FT-847, along with other Yaesu, Kenwood, and Icom radios, but many people are wary of buying used radios.

I'll verify the radio operates correctly tomorrow, but since I've used this radio, this laptop, and this tracking program more than a few times, I'm confident it will work fine,

The other important thing the tracking software can do is send commands to an interface unit to steer the antennas, and that's what I tested tonight.

The control box for the antenna positioners (a.k.a. "rotators" or "rotors") I use has a connector on the back to allow an interface unit to plug in to it, and "translate" commands from the tracking program into antenna movement.

The rotors themselves are pretty simple. They use a small motor and gear train to develop the torque required to move the antenna, and have a potentiometer mechanically linked to the output shaft that develops a voltage proportional to the position of the output shaft.

The purpose of the interface box is to measure and record these voltages, and then move the antennas in response to the data generated by the tracking program.

For this new setup, I'm using an "LVB Tracker" that I bought several years ago, but hadn't used until tonight:

During the calibration procedure, you run the rotors to their zero position, store the digitized voltage value in EEPROM, and then run them to "Full Scale", and do the same. The controller now "knows" what voltage corresponds to what position the antennas are pointing. If the tracking program data says that the satellite is currently at due South (180* Azimuth), and 45* above the horizon, it simply moves the rotors until the voltage from the potentiometers match the stored values for that position, and stops. Every 5 seconds it updates the antenna position if required, and then "sleeps" again.

So, after I calibrated the rotors and interface box, I waited for the next satellite to come over the horizon to see if it all worked.

Sure enough, when AO-7 was at -1 degree, the tracking program made a voice announcement, and the antennas begin to move from their parked position to where the satellite would be popping up. Watching the laptop screen, and the antennas, confirmed that yep, it was tracking the satellite as expected, and one more thing got crossed off the list.

When I get home from work Friday, I'll connect the coax to the antennas, connect the power leads to the preamps, set up the radio and laptop, and try and make a few contacts.