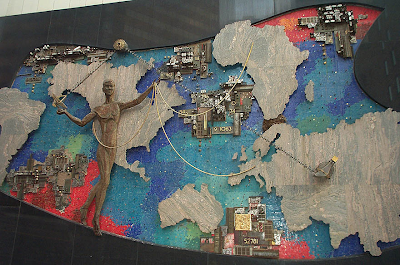 No, not a a grocery store. The term "Long Lines" is (was?) used in telecommunications to designate Long Haul Paths, which are those paths not associated with Local Exchanges, and they were handled by Interexchange Carriers. Now reading and watching all the Science Fiction stories, movies, and TV shows that I did, I was always fascinated with big dish antennas and the equipment that went with them. My Mom used to take my sister and I swimming at Dad's bosses house, and we always drove right by Andrew Corporation in Orland Park, Illinois. The antenna range that Andrew had was right along the highway we took, and I always used to stare at those big antennas and wonder who they were talking to with those big "SciFi" dishes. When I was 10 years old or so, about the time I got seriously interested in radio and other forms of communications, my Dad introduced me to a friend of his who worked for the AT&T Long Lines department. I'd also been to the Chicago Museum of Science and Industry that summer, and saw an exhibit sponsored by Western Electric called "The Wonder of Waveguide", and it fascinated me. So, getting a chance to meet somebody who actually worked with all that neat stuff was quite a treat for an inquisitive 10 year old! I decided then and there that when I "grew up" (still waiting for that to happen...) I was going to work for AT&T Long Lines. The Long Lines department was spun off in 1984 to become AT&T Long Distance, and eventually became AT&T Communications, slowly going to fiber optic, and shutting down all their C-Band Terrestrial Microwave activity. I never got to work for them, but the fascination of all things radio, and in particular VHF/UHF/Microwaves stayed with me all my life. One of the links I have in my huge collection is a glimpse at what the AT&T Long Lines System was all about. These guys handled everything, including military and Presidential secure links. I'm sure if you're my age +/- a few years, you've seen the huge microwave towers out in the country, and the antennas on top of large buildings in major metropolitan areas. A lot of that communications traffic has since moved to satellites, as you can put up a VSAT station, and have more bandwidth for less cost, than you could in the old "Leased Line" days.
Anywhoo...without further fanfare, I present you with a link to a magical place......

The Microwave Radio and Coaxial Cable Networks of the Bell System
Enjoy the trip back through time....I know I do!
Posted by drjim at 8:53 PM