And Now For Something Completely Different..... 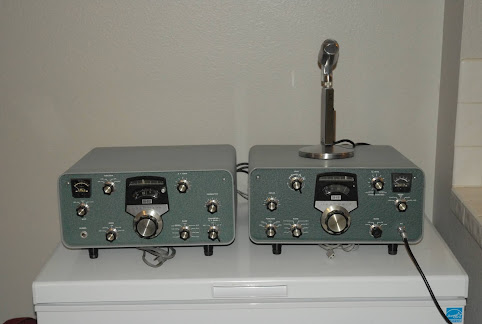 These are Heathkit "SB Series" radios. The one on the left is an SB-301 receiver, and the one on the right is the matching SB-401 transmitter. 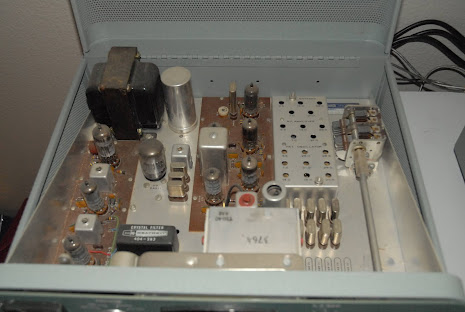 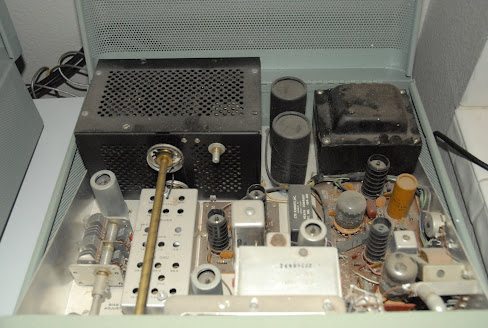 These are dusty inside, but it's evident they've been stored in the proverbial "Cool, DRY Place", as they show ZERO signs of corrosion on any of the plated hardware, which is astounding for 55 year old Heathkit equipment. The plating they used on some of the hardware had a distinct tendency to get a funky, chalky whitish powder coating if they were stored in a damp environment, and some of the steel hardware was very prone to rust. There's also no signs of any overheating, burnt parts, smoke/pet residue, strange odors, or anything else funky about them.

The microphone looks like it just came out of the box!

The transmitter has the optional "Crystal Pack", which means it can operate independently of the receiver, or you can flip a switch and have the frequency controlled by the receiver, giving you full transceive operation.

The receiver has the optional 400Hz CW filter, and I have an AM filter down in the basement I've had for decades.

These were both built by the same gentleman, and the soldering looks beautiful. Wire and lead dress is also very good. And the manuals were included, along with the original owner's notes.

I wasn't looking for these, they just kind of found me. I check the eBay listings daily to try and keep abreast of what certain items, mostly radio equipment, are worth. While I was going through the Heathkit listings, I found the receiver. I checked the other items the seller had, and found the transmitter. It was obvious from the listing pictures these were in extremely nice cosmetic condition for their age, and they didn't look modified in any way, And I didn't notice any darkening of the circuit boards around certain parts on them in the transmitter, indicating it had never been rode hard and put up wet. In short, these appeared to be a matched pair from the same builder in remarkably good condition for their age. All the interconnecting cables and both of the funky "two pin" power cords were included, another bonus.

Here's the "hook" in the story.....When I passed my General Class Amateur Radio license in early 1965, still in grade school, my Dad was so proud I thought he was going to bust. We'd talked about upgrading my Novice Class station before IF I passed the General Class 13wpm Morse Code and theory exams. And when I did, he took me up to the Heathkit store, and gave me a budget of $800, a LOT of $$ in 1965, and we bought these two kits, a matching speaker, a Station Console with an SWR meter, Phone Patch, and 10 minute Station Identification timer, and an electronic keyer so my high-speed Morse Code would be easier to send.

The reason getting a General Class Amateur Radio was such a big deal "Back In The Day", is that you didn't have access to the questions and problems you were going to answer and solve, or Test Exams on the Internet, like you do these days. The Questions used by the FCC were Above Top Secret! You never knew exactly what the questions were going to be, other than cut-and-died stuff like frequency bands, power levels, and other regulatory stuff that you just had to memorize. This forced you to really study and know the basics about A.C. and D.C. circuits, radio theory, how circuits operated, what all the components were and how they worked, how transmitters and receivers worked,  propagation of radio signals, and many other things. In short, you really had to know electronics in general, and radio in specific. One problem on the exam I received was to analyze a section of a transmitter schematic, and report why it didn't work. I happened to get the "trick" problem to solve, and it drove me bonkers. I looked at the circuit every way I could think of, and couldn't find anything wrong with it. My answer was that it had no problems, and should work. The FCC examiner who graded my paper looked at me, and said "Good Job, young man".

So now I have these two radios, a direct connection to my youth, and the start of my serious pursuit of a career in electronics. I could most likely "Bring Them Up On A Variac" to reform the filter capacitors in the power supplies, but I'll probably just shot-gun them by replacing all the electrolytic capacitors in both units. I should have all the required parts except for the large "Twist Lock" capacitors in the power supplies. Fortunately these are being made new again, and by replacing them, the equipment should be good for another 50 years of service. I know I have at least two complete sets of tubes for the receiver, as it matches the Shortwave version of this receiver that I own, and at least four of the 6146 Final Amplifier tubes for the transmitter (it uses two of them), and should have the rest of the tubes in General Stock. There are three "Compactron" tubes in it I don't think I have, so I'll have to get some of them.

And we got some rain last night! The rain gauge indicated .01", which was enough to wet the streets here. We went to a birthday party today for one of TLG's cousins, and the In-Laws have had to evacuate again. The Cameron peak fire is now over 200,000 acres, but the unexpected cool, wet weather (snow at higher elevations) has slowed the fire some after a 24,000 acre expansion on Thursday and Friday. Lots of talk from people who know the area, the history, the USFS, and all the local agencies involved. Most of the talk concerns how this fire has been managed compared to the others over the years. Terms like "Charlie Foxtrot" were tossed around, mostly directed at the top levels of the state government. Consensus was that the forests out here have been mismanaged the last 25 years, and we're paying the price for it.

As a comment on the political climate "out here" (gotta stop saying that), TWO of the young (8~10 years) boys at the birthday party were dressing up as Navy Seals for Halloween.

And we finally watched John Wick last night. What a roller coaster of a movie! Even SLW enjoyed it.....