Even though the copyright on the manual for this Heathkit THD Analyzer I'm restoring is dated 1978, I found a notation in ball-point on the underside of the chassis stating it was built in 1979. The actual circuit has been around "forever", and I've read in places this instrument is a virtual clone of the Hewlett-Packard 3xx series of Analyzers, as mentioned here on trona.com :

HP 331A thru 334A series (and Heath IM-5258)
These are solid-state, discrete-transistor designs; no opamps. They are Wien Bridge units with very wide range; in the HP units, up to 600kHz fundamentals(!!) and wide measuring bandwidth, above 3MHz except on the most-sensitive range. They offer low noise, and, in the 333 and 334 (and Heath unit), auto tuning. They employ average-responding metering. They have either a 400Hz passive LC high pass filter that is very good, or a passive 30kHz low pass LC filter, also very good, but not both filters. They desperately need expanded low pass filtering for better performance in the audio mid-band. Max full scale sensitivity is 0.1%, fully usable to 0.01% and below, except that their residual THD floor is around 0.01% (I've been told that the Heath has a higher floor but I've not used one). In the HP units I've used, this floor is dominated by 2nd harmonic distortion, which comes from the bridge amplifier/notch feedback system. I've never checked the depth of the fundamental null. I really should but I have good reason to believe that it is better than -90dB and may approach -100dB. Except for their high residual THD floor, and somewhat insensitive metering (300uV/0.1% full scale), the low noise and nulling of these analyzers may make them useful for measurements to 0.003% or even below.

So, looking up the HP Analyzers, we see that these are 1960's designs, all analog (or "Linear" BITD), and use very sound design principles. One of the things mentioned is that they have an "Auto Null" feature (called Auto Tuning above) that uses a servo loop to make much finer adjustments to the Wein Bridge than a human operator could. Imagine another set of tuning controls, being driven by a mechanism that can detect smaller differences than humanly possible, and tunes the other set of controls with much greater resolution than a human could.

Well, these "controls" are made of Photoresistors. Good, old Cadmium Sulphide Light Dependent Resistors, going back to at least the 1930's. They have a "Dark Resistance" of many Megohms, and a "Light Resistance" of anywhere from a few hundred Ohms to a few hundred thousand Megohms.

Think of them as a "Light Controlled Volume Control", and you're very close to having the concept.

And we have five of them in the Heatkit Analyzer: 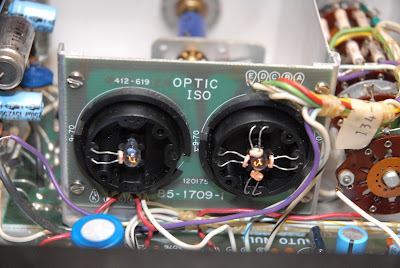 This is with the cover over the Reactive Component sensor in place: 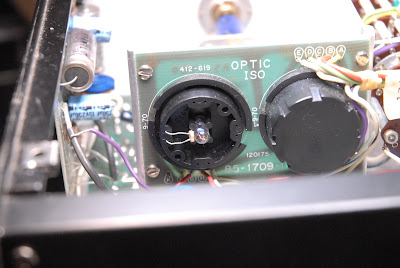 I measured them, and all were WAY off. I experimented with a couple of them, and they don't seem to want to adjust within range. Rather than freak out and order all new ones, I'm going to examine the circuit driving the lamp. They all seem to need more brightness to get down to the correct value, and that seems a little suspicious to me, so I'll do all the voltage checks of the circuits involved, and see if something is holding the lamp brightness down. I think it's a safe guess to assume these moved around a bit during the jolt the chassis received that bent up a few things.