Well, things are the workbench were going well with the Heathkit THD Analyzer, until the other night. I'd soldered two leads onto the circuit board pads that the photocell solders to, and this allowed me keep my Ohmmeter attached while I played with the position of the cell. This let me get a feel for how the cell picks up the light from the bulb, and how to position the cell. Having the shield cap off while playing likes this makes the resistance value of the cell go all over the place from room lighting, but at least I can see how moving the cell  up/down, right/left, in/out affects the reading, and could help me find the sweet spot where the cell should be. 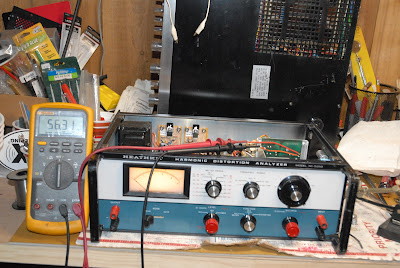 I moved the bulb as much as possible, and positioned the cell every which way to get a feel for it, and no matter how much I try, I cannot get it below 42,000 Ohms. The little foil reflectors I was paying with were required to even get it down that far. Now granted, I'm assuming this thing did work at one time, so what's changed?

I pulled the bulb out to examine it more closely, which revealed nothing. And then when I was putting the bulb back in, the "padded" tweezers I was using slipped, and TWANG!, the bulb goes sailing off to Where The Wild 10mm's Live......Buh-BYE! 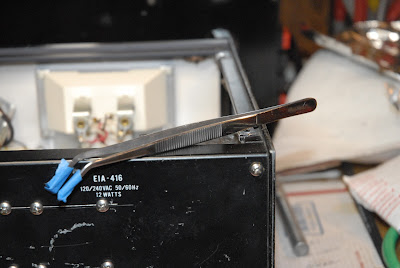 Yes, some colorful language was used....

The replacement bulbs I'd ordered last week came in the day after, so all was not lost. These are small bulbs: 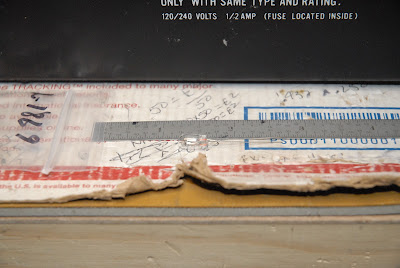 One thing I immediately noticed after I put the "replacement" bulb in place, is that the filament is about one-third the size of the OEM bulb: 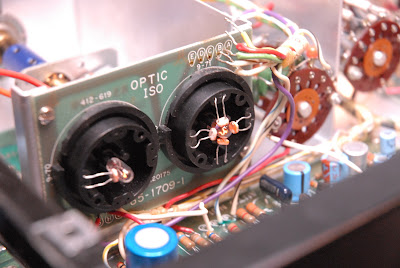 And of course, it made no difference. I've checked all the voltages in the lamp driver circuit, and they're very close to what the schematic says they should be, indicating the the current flowing through the bulb is in the correct range, meaning the brightness of the bulb is probably correct. The other identical lamp driver circuit also has voltages that match the schematic, so it looks like things are working properly.

The other side with the four photocells adjusted just fine. The target resistance was not-too-difficult to get set, and adjusting them went about how I expected it should go. This leaves the one photocell as the last thing that's suspect. Looks like I'll have to go photocell shopping.....

Had about 6" of snow on Tuesday, and the Ariens took about 20 minutes from start to finish. It fired right up, and 6" of snow just disappeared. All I had to do was walk behind it and guide it, and I had to use a higher speed to keep the maw full, as it seemed to throw the snow better the more you stuffed into it. Too bad I didn't have it the last two winters!