Current project On The Bench is a Heathkit IM-5248 Intermodulation Distortion Analyzer, seen here in it's eBay listing photo: 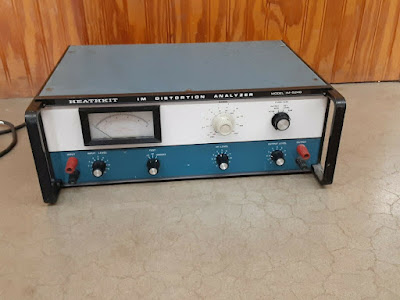 It was listed as "Working", but with caveat "Unit may require some maintenance due to age".

All the capacitors looked and checked OK, so I began by cleaning it from top to bottom. The black bezel around the meter had a broken screw boss on the backside, and since that's how they mount the meter, the meter was shaky and wobbly. It also had a nasty scratch on the face that I polished off. I wound up pulling the front panel off to get the meter loose, so I scrubbed the bare panel. Three of the six knobs are split, and one is a mismatched knob from another Heath product. ALL the hardware on the rear panel was rusty, so it was replaced with new stainless hardware, as will be the screws holding the cabinet panels to the frame. during reassembly. All the other hardware was tightened up as most of it was loose, and the switches and controls cleaned. The AC line cord had seen better days, and was replaced.

And after doing some preliminary checks, I proceeded to begin the calibration procedure. It failed on Step 2, calibrating the AC Voltmeter. Something is messed up with voltmeter's Range switch, and when I switch to the 1 Volt range, the sensitivity disappears, and I can't get it to calibrate to match the 1 Volt RMS at 1000Hz that I'm feeding it. I've been going over the multiplier resistors soldered on the switch, and had one fall off when I wicked off the solder. That's a new one on me! Anyway, all the resistors are in the correct position, and are of the correct value. It's beginning to look like a flaky switch contact, so I'll flush the daylights out of them, and treat them again with DeoxIT.

On the bright side of things, SLW and I replaced all the grout on the kitchen counter tops and backsplash. It was really groaty looking, had chunks popping out, and was discolored everywhere. I used a 1/16" carbide tile cutting / grout removing bit in my Dremel, and a lot of patience and steady hands to grind out all the old grout that was loose and flaking away. Did several clean-up passes over all the seams, vacuumed out all the debris, and turned it over to SLW to apply the new grout. She let it cure 48 hours, and then sealed it, so we hope it will look nice for some time to come.