Had to clear off the "workbench" on the other side of the room I use for my downstairs workshop so I can build the speaker kits when they get here.

After the bench was cleaned off, it looked a bit too empty, and I had these boxes stacked under it, and I really wanted to see if this stuff still worked, and.........

An hour later (had to find all the cables) I had my Commodore 128 set up and running "VR85", a satellite tracking program. 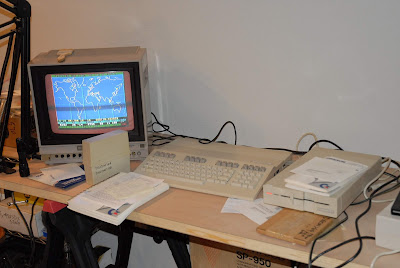 Three of the four disk drives I have appear to have developed problems. Two of them act like the AC power socket is intermittent, and one of them has a problem with release lever not working. Sigh......more stuff to fix.... 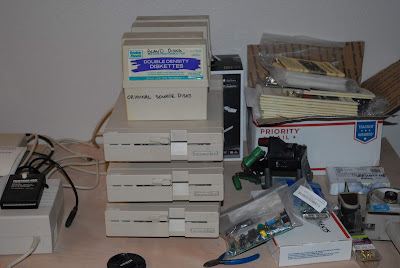 Anyway, now that the C=128 itself appears to work OK, and the monitor is clear and sharp, the plans for this computer include getting it on Packet Radio with my "A&A Engineering" DigiCom64 modem (right) and DigiCom64 program cartridge (left).

This is the gear I used when I used to contact the Hams on the MIR Space Station. I had just gotten back into Amateur Radio a year before, and had moved in to a really cool bachelor apartment in a large two-story commercial building. The landlady let me put up antennas, and I was off and running! Didn't have much disposable income, so I had to get pretty creative in assembling a station. I had an old, beat-up Alinco DR-590 that I pieced together from several junkers, and an Antenna Specialists 2 Meter vertical that somebody gave me that needed to be disassembled, cleaned, and reassembled to get all the corrosion off it. I used the radio on simplex and repeaters for voice work, and by unplugging the microphone, and plugging in some adapter cables to connect it to the modem, I used the same radio with the Commodore on Packet.

This is a "spare" modem in the picture as I can't locate my original one, but the cartridge is the same one I used on packet back in the middle 1990's, before cheap Internet came along and pretty much killed off Amateur Packet Radio. 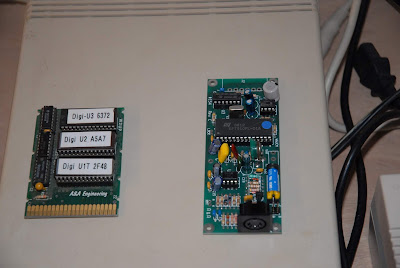 Since the Commodore can't multitask (i.e. run more than one program at a time) I had to run the tracking program to see what satellites would be visible, and when, and print out the pass predictions, then load the DigiCom64 Packet Radio software and make ready the radio for digital operation. It worked a treat, and what looks ancient, archaic, and obsolete today was actually not that many years out of the "state-of-the-art" category at the time.

And it was CHEAP! I got the C=128, two disk drives, and the monitor for $40 from a friend. The tracking program was $15, the packet modem was $65, the radio and antenna were FREE, and I had about another $75 in cable (most of that cost was new feedline for the antenna), connectors, and misc stuff.

For less than $200 I had a complete "2 Meter/440" station that I could use on voice, packet, and track satellites with. Pretty sweet at the time.

And 'ya just gotta love those 8-bit graphics! 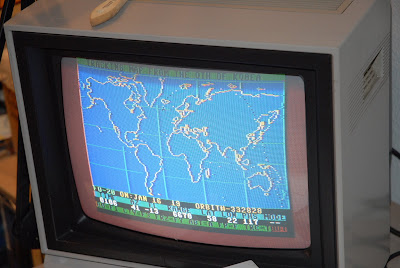