And calling these things "kits" is being overly generous.

Calling them "semi-kits" would be more accurate, but even that's a stretch.

Nope, this is a collection of parts, packed in a box, and shipped out. 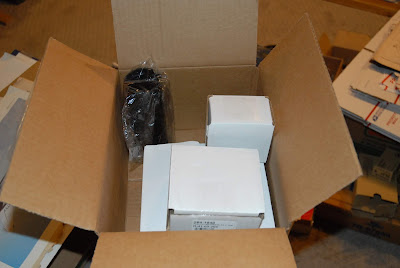 And why, pray tell, are power tools and hole saws on the bench with right out-of-the-box speaker "kits"? 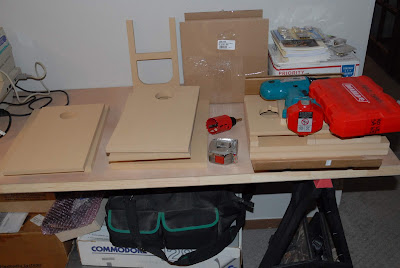 Why because they didn't give you any way to connect the assembled speaker to the stereo! I suppose I could have drilled a small hole, and run a few feet of wire out, but what then? No, you need an Interface Connector to handle that function. Since the output connectors on most real stereos are some form of a "5-Way" Binding Post that accepts banana plugs, having matching connectors on the speaker is the way to go. So, drill a 2" hole with the hole saw, and mount these nice little "5-Way" Binding Posts plates in the new holes.

Screws not included, of course. 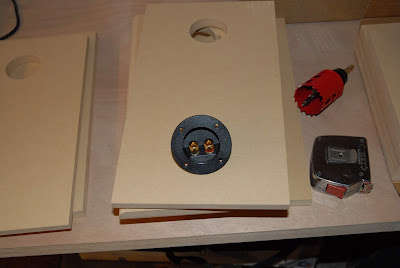 After drilling, just press-fit in the hole. 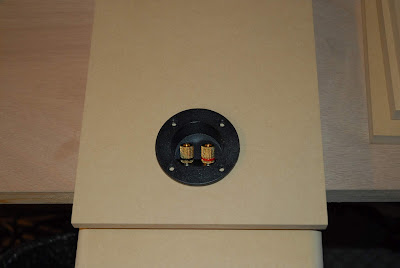 Might as well do both at once while I have the tools out..... 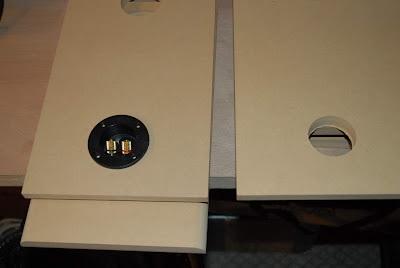 The pre-made hole in the back panel of the speaker is for the "Tuned Port", a deliberately sized "air leak" in the box that lowers it's Resonant Frequency, which increases the lower (Bass) frequencies the speaker can reproduce. 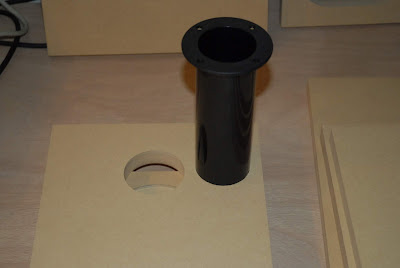 Mocking them up sans glue..... 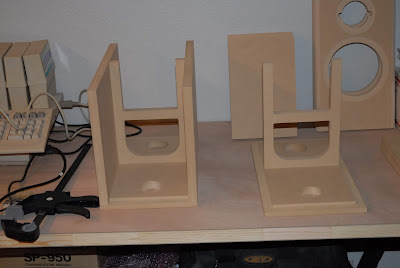 And here they are with the side panels and stiffening baffle glued in and lightly clamped. 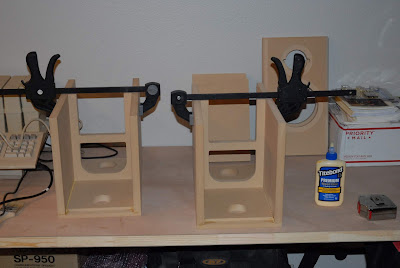 I'm not a cabinet maker, and never pretended to be one, so I have to say these 3/4" thick, MDF, "CNC Cut" pieces fit together beautifully! After a 24-hour glue curing time, I'll fit the two remaining pieces, and glue them in. The front doesn't get glued on until the very last, and I'm thinking of maybe screwing it on with a thin gasket in there. 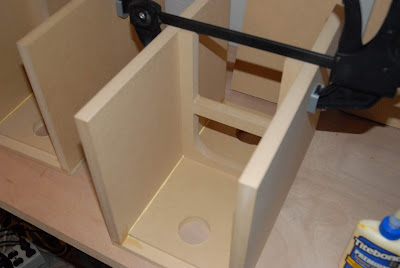 The enclosures get lined with acoustic foam to subdue high frequencies inside the box (makes the treble less "harsh"), and the cross-over assemblies have to be built.

No circuit board provided, of course.

Then the speakers get screwed into the front panel with the screws that were not included with the "kit", and the two speakers get wired to the cross-over network, and the input to the cross-over network gets wired to the nifty little Interface Connector I installed on the back, guess who supplies the wire, and the front gets mounted (somehow), and they should be ready to play.

Rather than leave these naked MDF, I'm going to coat them with something like bed liner that Parts Express sells. It's water-based, so the odor won't drive you out while it's curing, and it's extremely durable. I'll sand them out before I do it, and come up with some way to make the front removable.