New Toy On The Way **Updated**

My trusty old Systron-Donner Model 1702 signal generator took a hit to the front panel on the move out here. 100% my fault for not securing a 75-lb item properly, allowing it to slide around on the floor of the trailer. This one doesn't have rack handles, so there's about 18" of front panel that's pretty exposed, and the knobs slammed into something on the trip out here. 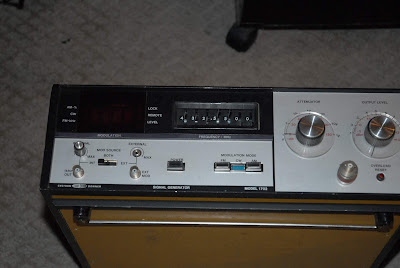 The level adjust pot for an external modulation source sheared off, and the level adjust pot for the internal modulation source is bent, and spins freely. These pots had 1/8" shafts on them, so I'm pretty sure they use a sub-miniature "instrumentation" sized pot, which used to be readily available. If Digi-Key/Mouser don't carry them, then Google is my friend, but these were standard parts for decades. 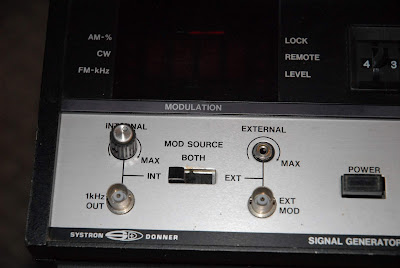 I'm just really, really, happy, happy that the thumbwheel switches used to set the output frequency survived unscathed. These things were unusual in their day, and even the surplus dealers are probably out of them by now. 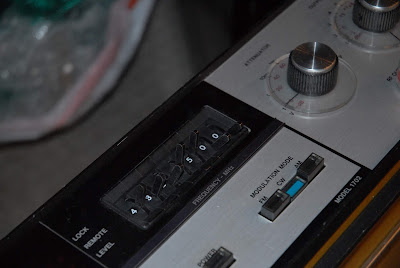 So, *if* I can get the parts, is it "worth" repairing? These generators typically command $750~$1k on the used market, a bit less than I paid for this one almost 20 years ago. And they're ruggedly built, rock solid, low phase-noise (quiet!) generators that seem to never wear out or fail, unless some dolt doesn't pack it properly for shipping.....

So, yes, to me it's worth fixing. Even if the pots cost $25 each, I'll have a good signal generator for fifty bucks!

Why, get another generator, what else? Besides, there are some very valid (and interesting) RF measurements that require two generators.

I wound up with this one, an HP 8657B, OPT1, OPT3. Option 1 is the world famous HP OCXO ovenized crystal oscillator, called the "High Stability Timebase", and Option 3 is improved noise performance/switching time in certain kinds of pulsed modulation, something I doubt I'll use. 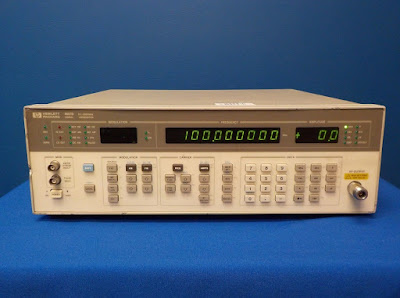 There were several available in my price range (< $1k), but this one had several advantages.

First, the installed "High Stability Timebase" is about the best crystal oscillator HP ever made, and they were used in many, many critical applications where an "External Reference" was not available. In some factories I've worked in, it was the highest precision 10MHz source on-site, and wound up being distributed throughout the plant as the "Master Reference".

It's also the "heart" of the various GPS Disciplined Oscillator designs out there that not only give you the superb short-term stability and spectral purity of a crystal oscillator, but also the long-term stability of an "Atomic Clock". That's a whole 'nother post that I'll be doing since I want to get my GPSDO running again to use for my own 10MHz Master Reference. This way my frequency counter, signal generator, and spectrum analyzer will get the enhanced accuracy and stability of a high performance (or used to be) Master Reference.

Secondly, it had the standard front panel output jack. Many of these instruments were used in Automatic Test Equipment racks where everything was under PC control on the HP-IB or IEEE-488 bus, and the operator was along for the ride, and to load/unload modules and hit "Enter" when prompted. All the normal front panel RF out put jacks were "optioned" out to the back panel because the "Back of the Rack" was where everything happened in ATE, signal routing wise.

Thirdly, the place is an ISO-everything certified Calibration Lab, and the instrument has been tested for 100% functionality, and comes with a fresh calibration.

And I (finally) finished the towel rack project in the upstairs "wife's" bathroom. 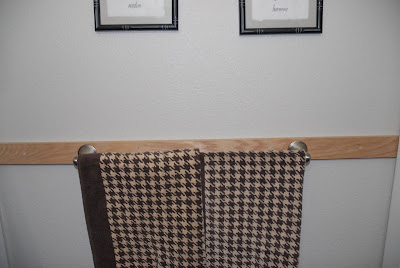 Update on the generator.....

The generator has an output corresponding to where the thumb switches are set, and the output attenuator (think 'Volume Control')  works correctly.

The control with the bent shaft also appears to work, at least according to the display that goes active when you select that function.

However......when I tried to look at the generator output on my Spectrum Analyzer, I see.....nothing. I tried using a different signal source, which I can read on my frequency counter, but I can't see that signal, either.

And finally......I can't even see the built-in 100MHz "CAL" signal, which also drives the frequency counter.

If you can't see the signal from the built-in CAL source, you're SOL. Looks like I'll be buying another Spectrum Analyzer sooner than I thought......
at December 10, 2018 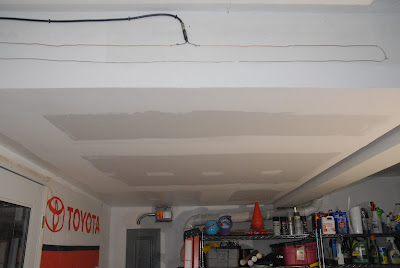