A lot of my Facebook Hot Rod friends have been asking me questions about my 1973 Firebird, so I thought I’d get this down before the sands of time drift any higher on my memories of it. Unfortunately I don’t have any pictures of it, so you’ll just have to Google for pix to satisfy your curiosity…...

The list price for all this Pontiac Goodness was $4582, and the other salesmen at Bert Adams Pontiac in Joliet were stunned that it was almost $4600, and “Didn’t Have Air!”, to which I replied “Yeah, but it’s got Ram Air!”.

The “Unitized Ignition” was only offered in 1973/74. It was the precursor to the GM “HEI” (High Energy Ignition), and as far as I know, was only offered on Pontiacs. The coil, cap, and plug wires were all integrated into the distributor, and it looked a bit like a “3/4 Scale” HEI unit. This was a significant upgrade at the time, and even worked perfectly after I put the rebuilt engine it. It never misfired, and worked all the way to 6800 RPM, where the valves floated. Normally I shifted the rebuilt engine at ~6500RPM, but a couple of times I goofed and went “just a bit” higher.

The Ram Air hood consisted of opening up the front scoops of the standard Formula hood, and inserting some metal grilles, and adding some rubber boots on the bottom of the hood that mated with a special air cleaner base. There was a vacuum flapper assembly in each one of the snorkels that mated with the rubber boots on the bottom of the hood, and they only opened to allow cold air from the scoops into the air cleaner at wide-open throttle. The rest of the time, the inlet air to the carburettor came through the cardboard hose that attached to a sheet metal “heat stove” bolted to one of the exhaust manifolds.

The “Y99” Handling Package included all the specific components that the Trans Am used, such as the 1-1/2” front sway bar and 3/4” rear sway bar, special mounting hardware for the front bar (it used BF Goodrich “Rivnut” inserts in the frame and cap screws instead of just large, self-tapping screws), special rate springs and shocks, 15x7 rims with 60-series fiberglass belted tires, and a few other things like different suspension bushings. If you ordered this with the power steering option, you also got the special variable ratio power steering gear box that was used in the Trans Am.

The “Heavy Duty” cooling option came with a gigantic “Four Core” radiator and a “Flex Fan”. The car NEVER overheated once, or even came close to it in traffic, after I installed the rebuilt engine, and was well worth the pittance GM charged for it, a staggering $21!

I took delivery of it on 26 February 1973. It came with an OEM “Hurst” shifter, and Firestone “Wide Oval 60” F60-15 white-lettered fiberglass belted tires. I didn’t order the optional styled steel wheels, as I had already purchased a set of American Racing Equipment “Torq Thrust 70” aluminum rims in the 15x8 size. The standard rims were 15x7 plain stamped steel rims with little “Dog Dish” hubcaps.

Before the car was a week old, I had the Americans installed on it, and had a set of Doug Thorley “budget” headers on it. I got the “cheap” headers because they fit very easily, and with a stock engine running into the restrictive cross-flow muffler at the rear of the car, spending the big bucks on a set of equal-length, hard to fit Hooker Headers would have been foolish.

A few weeks later I installed a set of Koni shock absorbers on it, set about half between “no damping”, and “bust your fillings loose”. The OEM shocks were actually pretty good, and were a new GM design called “Pli-A-Cell”, which used a small plastic bag full of Nitrogen at high pressure inside the fluid reservoir to reduce foaming of the fluid. It was an early attempt at a modern “Gas Charged” shock absorber, and was a hybrid between a gas shock like a Bilstein or KYB, and a “regular” shock absorber. I gave them to a buddy with a bone-stock 1974 Camaro, and he noticed an immediate improvement over his worn out shocks. He also wound up with the OEM 15x7 steel rims which he put a set of Goodyear “PolyGlas” tires on when his OEM tires wore out. A few weeks later he put a set of Trans Am sway bars on the car, and had a pretty good handling Camaro. Still had a 307 2bbl and an automatic, but he had a lot of fun with his car, and that’s what’s important.

The only other engine modifications I did to it were to increase the initial spark timing, “curve” the distributor to bring the mechanical advance in faster, and rejet the 750cfm Rochester QuadraJet carburettor. Many people bad mouthed the Quadrajet as being junk. They weren’t. They were a very adjustable carburettor, and once you understood them, they were excellent units. My car with the rebuilt engine ran a best of 13.01 @ 118 MPH in the quarter with street tires and the Q-Jet. And yes, I experimented with a 750 Holley Double Pumper and the Q-Jet on an Edelbrock Torquer intake manifold. The Torquer killed some bottom-end, which made the car hook up easier, but the ET and trap speed stayed basically the same (low 13 seconds, 114MPH headers closed, 118MPH headers open) compared to the GM OEM “455 H.O.” cast aluminum intake I preferred. This intake looked almost identical to the famed Chevrolet “Z28 Dual-Plane High Rise” intake except it was for a Pontiac, fit a Q-Jet, and had a separate cast-iron exhaust crossover under the main aluminum body of the manifold. It was absolutely the best intake manifold you could get for a Pontiac back then, and it blew the Torquer away on the street with more midrange and better throttle response.

Next: Base Engine specifications and my mods to the engine and car…...


Thanks to the magic of the Internet, the son of one of my best friends asked his Dad if he had any pictures of the car, so here you are. 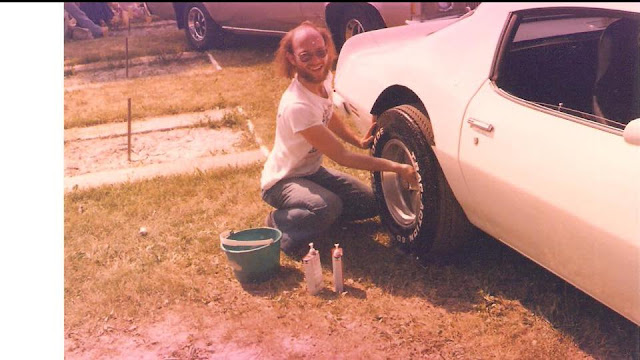 Getting cooled off by my friend's wife: 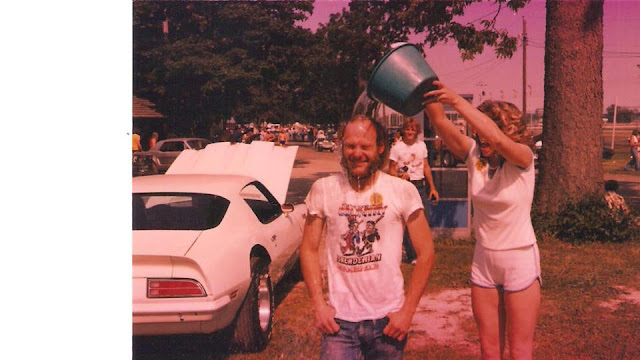 Driving the car ON THE TRACK at Indianapolis Motor Speedway: 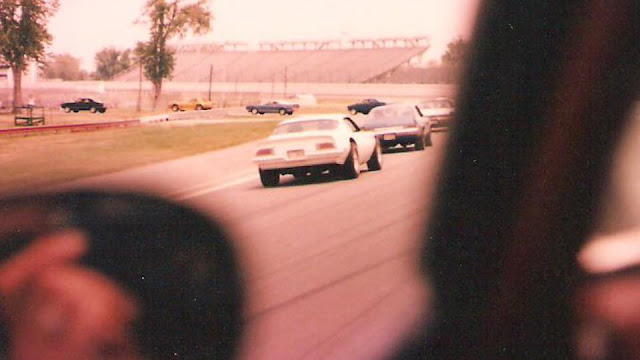 These pictures were taken at the Car Craft Street Machines Nationals in 1979.