Spent the day on the Iowa doing radio stuff, and in meetings.

Museum Ship's Weekend is coming up, so I have a few things to tinker together for the Grey Radio Gang, namely another little adapter box so they can interface a "Red Phone" with a laptop to route some audio to the Combat Engagement Center.

But before that, we have the Armed Forces Crossband Test coming up. This is a test whereby we'll be allowed to transmit on approved DoD frequencies, and listen on the Amateur Radio frequencies.

Sometime back, one of our members was able to contact the guys that do USN ship callsign assignments. He also contacted the USCG Heron, which was using the callsign NEPM at the time.

The importance of the USN callsign NEPM is that it's the callsign originally issued to the USS Iowa when she was commissioned.

The Captain of the Heron was more than willing to release the callsign, and in exchange we helped him get NHRN, an exchange that made both sides happy.

We now have authorization to use NEPM, "In Perpetuity", from the DoD, and we'll take the Iowa on-the-air, using the 1980's ship's legacy radio gear, on May 11th this year. 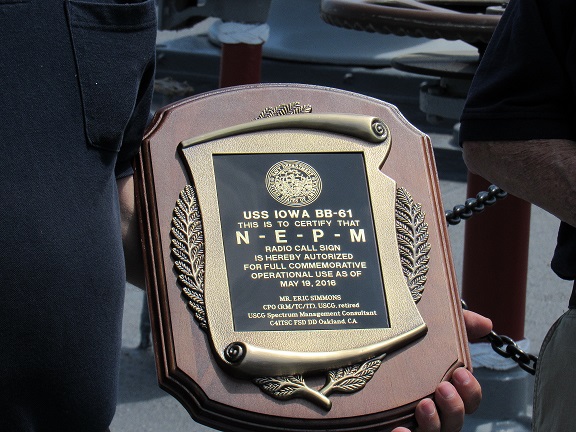 This will be the first time the Iowa has been on-the-air with NEPM in 27 years.
Posted by drjim at 8:18 PM