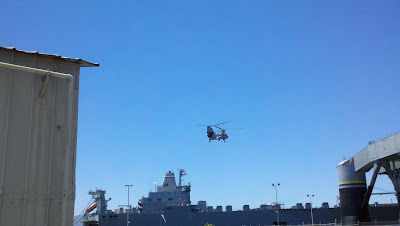 Catchy title, isn't it?
Over the last couple of days, we've been visited by no less than 12 CH-47 Chinooks. Man, those suckers are LOUD! They'll come in from the ocean, and hover over the lone MARAD ship that's docked at the next pier over from us.
Today, they gave the ship the Full Monte.
At least six came in, and dozens of troops in full battle gear fast-roped down on to the deck. All this time four or five Super Cobras were orbiting the area, backed up by several particularly nasty looking Blackhawks.
While this was going on, two more Chinooks set down in the parking lot next door, and a whole lot of fully armed troops came out and stormed up the stern ramp (it's a RORO Cargo ship) of the ship.
Since the helos were Marine units, I'm guessing they were from Camp Pendleton, which isn't too far down the coast from us. A couple of times a year their LCACs will come into the inner harbor/turning basin, and maneuver around for a while, and they skeedaddle back out and over the horizon.
Pretty interesting, but I don't see any way these guys could sneak up on the bad guys! They shook the building I was working in the last two days when they went overhead, and we could hear them coming a good ten minutes before we could see them.
Posted by drjim at 5:17 PM