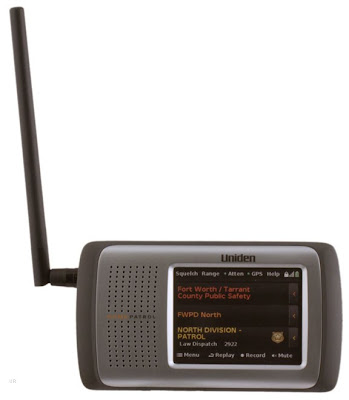 I'm a regular scanner user, and I have several scanners and receivers for listening to all kinds of radio traffic, almost from "DC-to-Daylight". I get quite a kick out of listening to the local airport traffic (LGB has a real honey for one of their ATC's!), and it's nice to be able to punch up the frequencies (I actually have them programmed) for my local PD/FD so when I hear sirens, I can find out what's going on. I firmly believe that we have a right to know what our local agencies are doing, and that includes monitoring their radio traffic. Now I don't mind their using encrypted transmissions for *some* activities, but regular radio traffic should be in-the-clear.
There have been many evolutions of public agency communications, starting with one-way broadcasts from Police HQ at one end of the AM radio dial ("Calling all cars!"), to simplex repeater systems, and on to trunked systems. Trunked Radio Systems are complex computer-controlled entities, somewhat similar to our current "Packet Switched" telephone network. They operate on multiple frequencies/channels, with one called the "Control Channel", which listens for a radio to start transmitting, analyzes the information, and automatically sends commands back to the radio telling it the correct channel it should switch to in order to communicate communicate with other radios in its "Talk Group". It gets quite complicated, so I'll let the reader follow the links to read more about it. Its main advantage is that it allows many users to share a common radio system, conserving the limited radio spectrum available in most metro areas. It's expensive, and has had more than it's share of developmental problems during the early days.
Later came APCO-25, also known as P-25, for "Project 25", which was a switch from analog to digital modulation. Although APCO-25 can operate perfectly well in simplex and repeater operation, combining it with trunking brought us to the current systems widely deployed here in the US.
When the big local agencies (LAPD, LASD) out here went to trunking, I wasn't too involved in scanner-listening, the city I lived in at the time kept their conventional radio system, and the big agencies kept a lot of their radio traffic operating "in parallel" on conventional non-trunked systems for interoperability reasons, and so I never bought a dedicated scanner that could deal with trunked systems. I just confined my listening to conventional radio systems in my area. When they went digital, I had to buy a new scanner that could handle the P-25 systems. My new scanner not only did P-25, but also conventional trunked systems, so by waiting, I got a "twofer".
One of the things about scanning is learning how to use your equipment, and getting a trunking-capable scanner taught me lot, including what a PITA it is to manually enter all the frequencies, talk groups, control channels, is it Motorola, EDACS, LTR, conventional trunked, all digital, analog, or mixed, or etc, etc, etc. The scanner itself could recognize and remember distinct individual systems, but it was still up to me to add the alphanumeric tags so I'd know *what* I was listening to. Fortunately, the scanner has a serial port on the back, and with the aid of a program for my PC, I was able to copy the frequency databases from the Internet, convert them to a form the radio could use, and upload them to the radio. Still, it took time to ferret out current, correct databases (Radio Reference is THE best!), grab them from the 'Net, paste them into the program, and upload them to the radio.
Now Uniden has come out with a new model that's made just for people who want to know what's going on, but don't have the time, inclination, or technical knowledge to get a digital-mode trunked radio system scanner up and running. Called the "Home Patrol", it comes pre-programmed with most major cities by zip code, touch screen display, GPS and USB ports, and has a removable memory card that can be used to load a new database, or to RECORD what you hear.
Availability should be September 2010, and the price is guesstimated at around $600.
Man, we never had it this easy when I got started in radio!
Posted by drjim at 1:42 PM