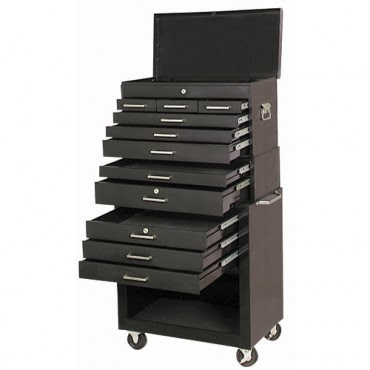 I have to admit to buying stuff at Harbor Freight. I consider (or did) most of their tools to be of the "One Use Throw Away" type, although they've gotten much better over the years, and some tools, like a hammer, are pretty hard to screw up!
I've wanted to get another rolling tool box to keep my power tools and bigger hand tools in for some time now, but going to Sears to get another $300 rolling cab like tha one I bought last year just didn't appeal to me. The quality of Craftsman-branded toolboxes has gone WAY down the last 10 years, and the ones that are in my price range are pretty cheaply made. Very flexible (they "oil can" a lot), the "ball bearing" slides feel like they been lube with sand-laced grease, and even the paint is pretty hit-or-miss. So when I got this ad in the email for Harbor Freight for a the set for $150, I figured what the heck. It's a complete 3-piece box combo for about HALF of what I paid for the last roller I bought at Sears. I didn't expect too much, so I was pleasantly surprised when I started to put it together. It has threaded inserts for the casters on the roller, and the side handles on the top chest. It's not a "Flexi-Flyer" like the last thing I bought from Sears (BTW...whatever happen to Roebuck?), and although I could have painted it better here at home, at least the paint has a good thickness and fairly uniform appearance. And as a nice touch, they included drawer liners of a somewhat spongy nature that will at least keep the tools from rattling around when you open and close the drawers. No, it doesn't have ball-bearing slides, but for $150 I can afford to buy a can of white Lithium grease and keep the slides lubed!
I won't go into where they source all their stuff. I used to be against sending money to to the ChiComs, but considering who's in the current "administration" I think the point is moot.....

ARRRRGH! Went to roll it around in the garage this morning, and realized I have the casters on the wrong end!
Oh, well.....at least I didn't have it full of stuff yet!
at August 06, 2010