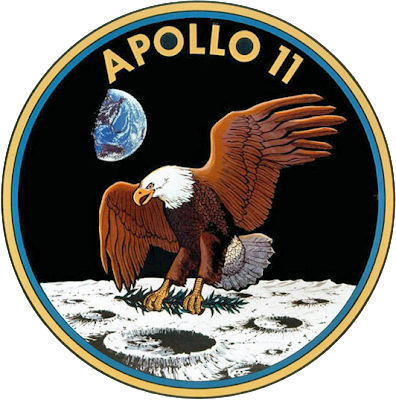 Happy 40th to the crew of Apollo 11!
God, I can't believe it was FOURTY YEARS ago that we landed on the Moon. I was between high-school and College that summer, still not really sure what I wanted to do for a living, except that it would involve Electronics, and probably Radio. That particular Sunday I was rehearsing for a community theater production that I had a part in. Yes, some Geeks have at least a *small* artistic streak in them, and I'm one of them. I wasn't on stage much at that rehearsal, so I'd brought my little Sony B&W TV-500U "Micro TV" with me to watch the landing. I'll NEVER forget "Four forward, kickin' up a little dust", and then Armstrong's announcement that they were down safe.
I erupted into a cheer like my team had just won the Homecoming Game!
A few minutes later, a couple of the artsy-fartsy types came in and asked me what I was being so loud about, and I told them we were down safe on the Moon! Wow, talk about instant Absolute Zero in the room....I couldn't believe the disgust and derision these supposedly "educated" people began heaping on me, NASA, the space program, and anybody who didn't want to just give all that "wasted" money to the poor.
Liberals were pretty annoying even back then, but I was so excited I didn't care much, and just wrote it off to their never having had Real Jobs out in the Real World.
I could bore you with facts and figures about the Saturn rocket, but I won't. If you're interested, just click on over to Ken Rockwell's site, where he does a MUCH better job at this stuff than I do.
And congrats again to our Astronauts, the army of contractors, and the people at NASA who made all this possible back when our country had the will and the backbone to do great things.
at July 18, 2009