Now that I've got my test equipment stuff all sorted out, there's one thing I need to build before I can test audio amplifiers, and that's an Audio Dummy Load. Similar to the Dummy Loads, or Dummy Antennas, that I use when testing transmitters, but specialized for audio use.

It's basically a Load Bank of non-inductive resistors with some "5-Way" binding posts, and it will allow me to run just about any amplifier I'll ever have to test.

The green things are 8 Ohm, 100 Watt resistors, and are connected in series/parallel to give me 8 Ohms at 400 Watts. 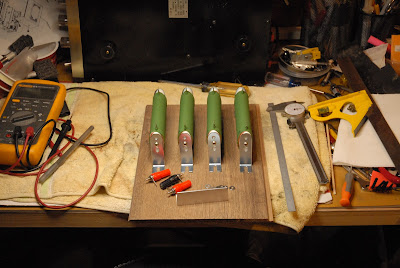 The brown board is a cut-off piece of the flooring we just had installed that I kept a few pieces of. It's non-conductive, easy to drill, and best of all, FREE! The two red and one black items are the binding posts, and I'll drill the piece of aluminum angle to use as a bracket. One will be the common, one will be for 8 Ohms, and the third will be for 4 Ohms. By tapping the junction of the four resistors, I'll have a 4 Ohm load rated at 200 Watts, and that should be plenty.

Why a dummy load? Well for one, I don't have any speakers that can take that power level, and two, it would deafen you in the shop.