Monday night was the worst. She was in misery after the nerve block wore off, and couldn't take the Percocet as it gave her a hugely upset stomach and headache. So, she suffered all night long, whimpering when she moved, feeling like she was going to drive the Porcelain Bus but not being able to do so, as she couldn't eat. At least she could keep liquids down, so there was that. Tuesday she was out most of the day, as the anti-nausea medication she has kind of does that, and the migraine medicine she also took *really* knocks her out.

Tuesday evening was better, and she was able to get by with just acetaminophen, and some Meloxicam, another NSAID, so at least she slept OK Tuesday night, as opposed to being "knocked out".

She's much better today, and has good movement without pain of the fingers on her right hand, although they're still swollen a bit. And her emotions are all over the map, due in no small part, I'm sure, to the wide range of medications in her.

Somebody asked in a  comment if they were going to remove the hardware, and she says no. She says there's no way she'll go through that again, no way, no how, and I can't blame her.

And other news brings in some repair work for the gentleman I bought the TEAC A-4010SU tape deck from. It's a KLH Model Thirty-Four "All-In-One" stereo system. It has an FM stereo receiver in it, along with a Garrard 3-500 turntable and a pair of speakers. 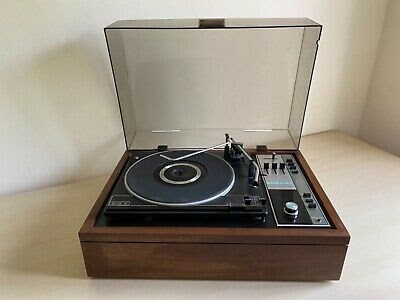 And these are the speakers it came with: 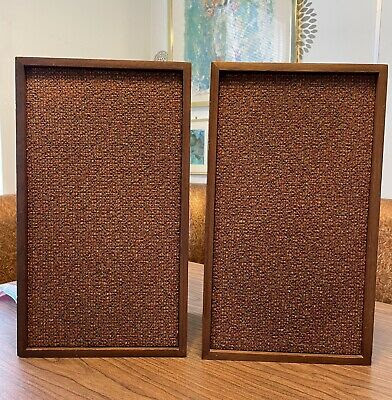 Here it is undergoing evaluation: 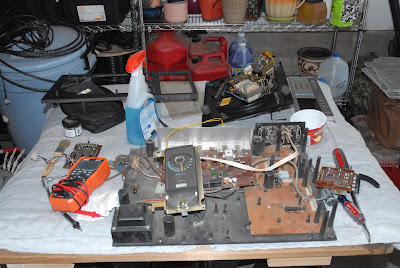 These are pretty simple units, but have some known problems. I haven't started on the turntable yet, but I'm guessing it just needs a good cleaning and lubrication.

The two "Amplifier Output Protection" fuses were both blown, but the transistors check good, and there's no signs of overheating in the amplifier stage from a bad transistor. 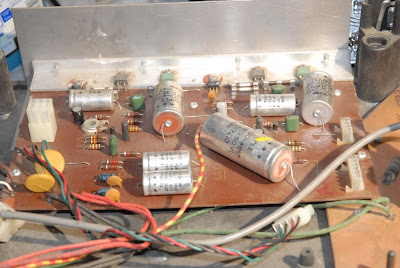 The silver cans are the electrolytic capacitors. The one facing you with the reddish orange end is the only "ggod" one in there. The angled one with the chalky, lighter colored end is a bad one. It shows signs of the rubber seal degrading, and leaking the electrolyte out, causing the capacitor to lose value. The other thing it causes is the capacitor to start acting like a resistor, and allowing DC current to flow through it. Cap gets leaky enough, and enough current flows to pop the fuse. Six of the seven capacitors on the board show seal degradation, and I'm sure the seventh one is on borrowed time. Basically, they ALL need to be replaced before this will work again, and I've advised the owner of the parts and labor cost to get this running again. And all the "Molex" connectors used to interconnect all the assemblies need to be de-mated, cleaned, and then re-mated to get rid of any possible intermittent connections that these are prone to develop after sitting many years. Not too bad to do once it's stripped down this far.

And of course, the unit will get a complete cleaning, testing, spit-shining before I release it back to him.

Total bill to tear it down, repair it, and clean it all up will run about $200.

And when he saw how nice the TEAC came out, he muttered something about "I should probably buy it back".