Well, the big storm we were expecting has passed through. We received about .2" of rain in several hours, and there were times it was raining pretty hard, with little mini hailstones in it. There were flash flood warnings out for all the burn areas from last Summer, especially the Cameron Peak area. Mud and debris flows are expected, and there could be up to 12" of snow in the Rocky Mountain National Park area. The in-laws up in the canyon are ok, as it was their turn in 2012, and they were spared this year.

The creek that runs behind The Kids place is going full-bore, and TLG is suitably impressed.

Also made significant clean-up/re-organization of SLW's side of the garage, something that hasn't been properly addressed since we moved in 3-1/2 years ago. The wire rack to the immediate right of the ladder was put in the first few weeks we were here, along with the other four on the Toyota side of the garage. I'd pieced together one of those really flimsy grey metal shelf units, the kind with square nuts and slotted screws I'm sure you've seen, for her to put her "garden" stuff on. We had three of them abandoned here, and I made one "good" one out of the three. Well, she's outgrown it, and now has her woodworking stuff to store, too. So I pulled everything to the right of the first wire rack out, cleaned the area, went and bought another rack for the garden/lawn/woodworking rack, put it together, and then put everything back. She picked up about 8" of additional room between all the "stuff" and that side of her car, and everything on the new rack is organized. Yes, I still haven't got the flash settings figured out for a good fill, and I was too beat to photochop it after goofing off for several hours with TLG, so it's time to RTFM again. 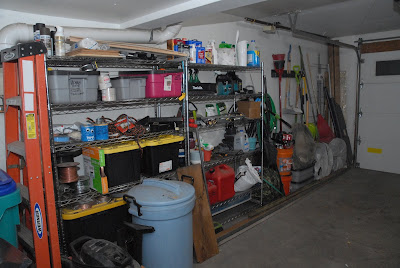 Two of the four identical racks on the other side of the garage got the empty/sort/organize treatment, and I wound up with more than one full "6 Tier" rack completely empty. I loaded all the crab apple wood on the bottom two shelves to dry with about a half shelf empty, and have four more completely empty shelves to stack the ash wood on. I'm still going to have beaucoup ash left that I'll probably have to figure out how to properly store outside.

The antenna is working great after getting it back in service, which is getting me fired up to sink the three 4x4 posts I have, and use them to mount the three antennas I "need".

Well Seasoned Fool asked the other day what I was using for lightning protection, an excellent question. For now, I disconnect the cables where they come into the house. After I get the poles planted, each pole will have an 8' ground rod driven in the soil next to it. The ground rod will have a "PolyPhaser" Surge Protector mounted to it with a solid copper plate. All three rods will be connected with a #2 solid copper wire. The feedline (coax) comes straight down to the surge protector, and the output cable from the surge protector to the house makes a 90* turn, and runs along the gravel beds to the feed-through box I built last year.

There's nothing you can do to stop a direct hit. You can divert some by providing an "easier" path to take, like by having the coax run straight down to a surge arrester connected to a good ground system, and then make a fairly sharp 90* bend and run along the ground.

The other thing I'm working with here is that the antennas are not higher than the houses or trees, and the higher structures provide a "cone of protection" to things lower than they are.

BUT.....lightning can do very strange things, as I've seen. The setup I'm using is to keep static electricity from building up (protects the radios and operators), while providing some level of nearby strike protection.