And work continues on getting the backyard cleaned up, the damaged gutter repaired, the weeds beat back, and the trees fed and watered.

Dropped 475 bucks at the Home Depot last week, and I've been putting the items to good use.

The gutter guys came by today, and quoted us $600 to replace the damaged gutter and downspout, paint the gutter, and replace the busted "gutter guard" that keeps leaves and other trash out of the gutter on that end of the house.

Mixed up a batch of "Roundup 365", and sprayed the gravel beds, back porch and driveway joints, and the window wells so nothing gets started in them.

Fed the maple tree and crab apple tree with my "Ross Root Feeder", and watered the ash tree with my "Corona Deep Root Irrigator", so they're good for a couple of weeks.

Got the hoses, sprinklers, shut-off valves and other miscellany out of storage and ready to go. One of my two-way water faucet adpators surprised me the other day when I hooked up the hoses, turned the water on, and it started spraying everywhere. I'd left it screwed on the faucet, under the styrafoam "freeze protector", but it had some water in it, it froze, and split the cast brass body. I'll have to dry it well, clean the metal, notch it out with my Dremel, and then solder it up with some "TIX Solder", and return it to service. 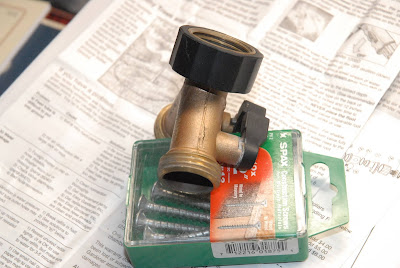 I sure don't remember my Dad doing anything special to the outdoor water faucets when I was growing up in Northern Illinois, and it gets pretty cold in the Wintertime. I remember people having frozen pipes, but they were usually the water pipes to the house from the city water system. Here we put little insulated houses on the outdoor faucets, and use special "Freeze Rated" types. They're also anti-siphon faucets, which is a Good Thing, as sucking dirty yard water back into the house is probably a Bad Thing.

And I've been sawing, stacking, moving, and sawing some more on the pile of wood we "harvested" from the fallen tree, and the sections of the crab apple the arborist generated. Looks like we'll have several Winter's worth of firewood, perhaps more. I suppose I should look into the Do's-and-Don'ts of storing some of it outside, off the ground, and somewhat covered, as otherwise it'll take over all the storage space in the garage, and that's hard-won territory I'm not willing to give up.

Beautiful day here today, high 70's and partly cloudy. Wanted to spray the weeds, but the NWS is calling for rain, so I'll have to watch the weather radar closely. I just hate spraying 30 bucks worth of chemicals on the yard and have them washed away the next day. I'd get the granular stuff, but that means getting a spreader, storing the spreader off-season, maintaining the spreader.......naw.........I'd sooner pay more per application, and be done with it until the next time.

And I'm perusing nextdoor.com and craigslist for a snowblower, "global warming" be damned. I know what I want, I have a truck now, and as soon as I find one, it's coming home with me.

Y'all have a good weekend!