We gave TLG one of his birthday presents on Sunday when he came over to spend the night. I would have given it to him on his birthday, but it would have been a hassle with all the other kiddies around, and I KNOW he would have wanted to play with it then and there, so I thought better and held off. 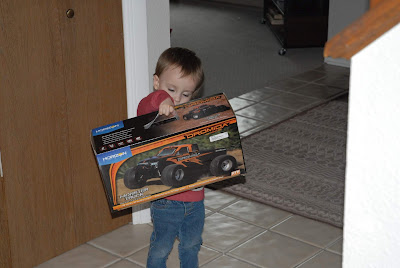 It was a "half-off" deal I got when the local Hobby Town closed, and I probably should have bought a couple more so he and his cousins could race them in the back yard. 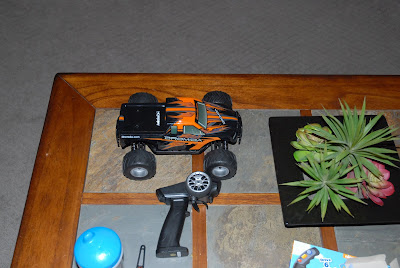 It's actually a pretty decent R/C car, has "Full Proportional" steering and throttle control, and the wheel radio transmitter even has a nice foam grip around the steering wheel. It's small enough, and has a tight enough turning radius, that it's very controllable down in the den.

And with Grandma providing instruction, he's been learning to drive! 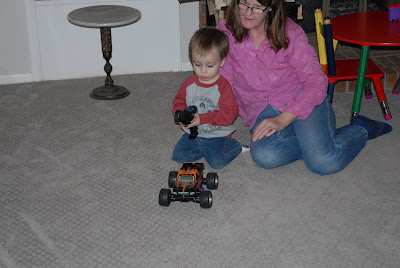 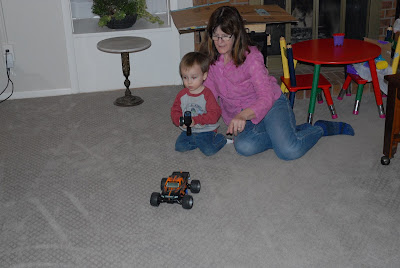 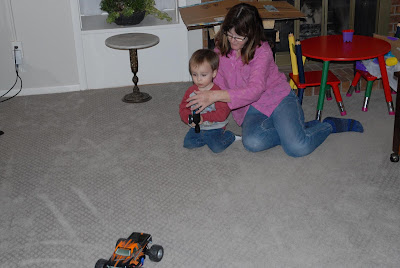 I dialed the throttle waaay back so it doesn't get away from him, and he's really twitchy on the steering, but he's got his throttle control figured out, meaning he doesn't just mash the throttle trigger all the way down, and understands that he can make it go slow, as well as fast.

Had appointment #2 at the Physical Therapy place today. Neither of us expected any improvement in 7 days, and there wasn't any.

EXCEPT...he gave me some exercises to do that work the same muscles, but don't require me to 'go to ground' to do them. They're much easier to do, with the result that I *will* do them, something I was laggardly about with the first set of exercises. These will work the Gluteus Medius muscle on my right side, which should give me extra support for the hip joint.

My consultation with the Orthopedic Doctor is this Friday, and I'm sure I'll have a much better handle on things after reviewing the data with him. So far, though, 200mg of Naproxen, four times a day, has knocked down the inflammation enough that I can do the exercises without going "OW!" every few minutes, and cut back on the Tramadol, which knocks the pain down to zero but makes me a bit "dozey" at times.
at March 09, 2020