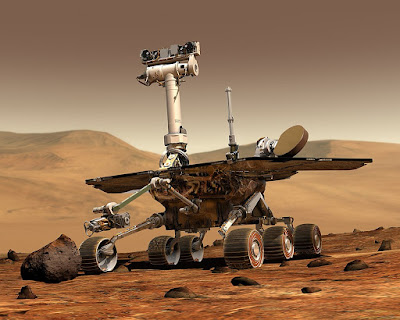 Well, with some sadness today, NASA announced that the Opportunity rover has not responded to numerous wake-up calls since August last year, and the mission has officially been ended.

The "Little Rover That Could" lasted far beyond it's "90 Day Warranty", and wound up being in service for 5,352 "Sols", or Earth-days of operation.

And she covered a tad over 28 miles from the landing site to her final position.

Since she'd survived dust storms before, there was hope that after the dust subsided, that the normal Martian winds would blow the panels clean, and she'd wake up on command.

Alas, Opportunity has not responded to wake-up commands, so today NASA pulled the plug.

I haven't heard if they'll occasionally swing a dish that way and call "Hello? Anybody Home?", or if they'll just write her off.

Anyway you look at it, they got a pretty big bang-for-the-buck with this little explorer!
Posted by drjim at 4:58 PM