I'm sure I picked this bug up one of the two times I went to the ER last week. Most everybody was wearing face masks, and there were signs up advising people to wear them.

My wife just ran out to pick up some NyQuil and Mucinex, and she'll probably be sleeping in the front bedroom tonight so I don't wake her up with my coughing.

My friend Randy who posted, and then mailed me, the pix of a very young drjim in his basement Ham Radio shack also posted the only photo known to exist of my 1969 Dodge Charger R/T. 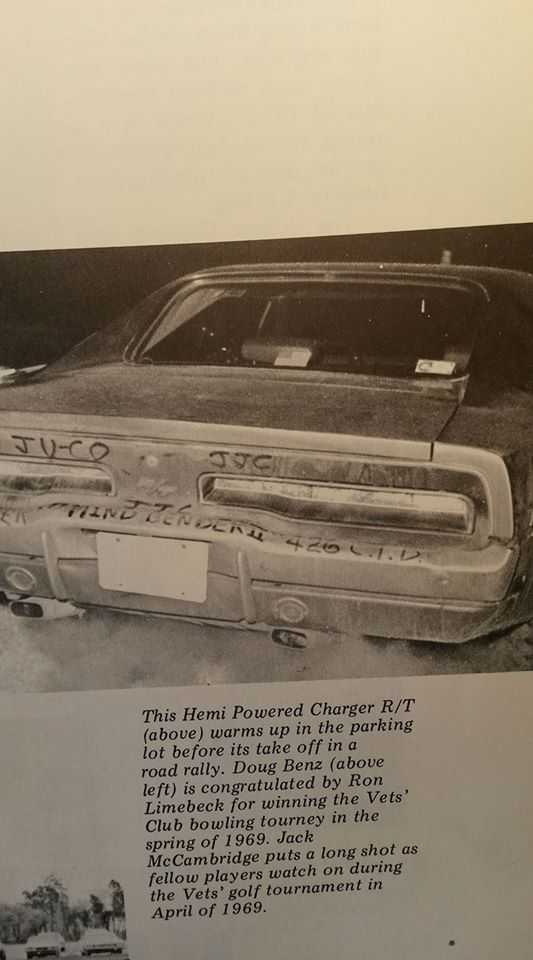 This was taken in the 1969~70 school year, as we sold the car in the spring after Allstate found out that it was a Charger R/T, and not "just" a Charger, and TRIPLED my insurance rates.


$500/year I could handle with my parents help and my part-time jobs, but FIFTEEN HUNDRED DOLLARS PER YEAR was an astounding amount of money back then, more than a "college kid" could afford. With 100 Octane leaded premium fuel costing thirty eight cents a gallon, $5 a week was enough gas to go to/from school, my job, and cruise around a bit when the weather was nice.

For those that don't know....the car is a 1969 Dodge Charger R/T with the SE (Special Edition) package, 440 Magnum V8, TorqueFlite automatic trans, 3.23 SureGrip ("POSI") rear, power steering, 11" manual DRUM brakes, tinted glass, and an AM radio. The SE package included "leather" (worst automotive leather I've ever seen) seating surfaces on the front seats, a simulated wood grain dash and steering wheel, a lighting package (light over ignition key, door panel lamps, and hood-mounted turn signal indicators), clock, and "SE" emblems. The paint code was "T5 Copper Metallic", and it had a tan interior. It did NOT have the R/T "Bumblebee" stripe because we ordered it from the Dodge dealer (Melvin Teasdale Dodge) in Morris, IL that my Mom grew up with, and since it was "her" car, he checked the "delete stripe" box on the order form, and also specified white wall tires instead of the standard Red Line F-70x14 tires they normally came with. With the stripe delete (There were discrete "R/T" emblems on the rear quarters) and white walls, it was a real sleeper! The best it ever ran at the strip was a 15.60@102MPH as it was severely traction limited with those skinny tires on 5" wide rims. I could spin the tires as long as I wanted to, and it would get pretty boring after a block or three. I wanted to get the 15" Magnum 500 styled steel rims with white letter Goodyear PolyGlas F-70x15" tires, but that would have put me WAY over budget, as that option required extra cost power disc brakes, and I wanted the SE package. My friend Randy and I took this car out one night and I held the accelerator down until it topped out at an indicated 130MPH. I don't know what RPM the engine was turning, because the tach would have cost about $100 extra, and I just couldn't afford it. Window sticker on it was exactly $4004, and I think we got it for about $3600~$3700.

"Mindbender II" was the name of a road rally a friend of mine and I laid out, and "JJC" stood for Joliet Junior College, also called "Ju-Co" or "Super High". It was the first public junior college in the USA, and this was the first year the school was located at its new campus, waaaay out on the West side of Joliet, on a high plateau surrounded by cornfields.

There was nothing to break the wind and snow in the winter time, and it could get pretty brutal for the Midwest, with 30~40 MPH winds, and temps of 10*~20* below zero. The closest parking spot to the temporary classrooms (trailers) was over a quarter mile away, and you typically walked at least a half mile, usually  more, from parking to your classroom.

People who didn't dress properly could, and did, get frost bite walking in to the classrooms from the parking lot.

JJC was a nice transition from high school to "college", but if you weren't careful, you'd treat it like an extension of high school ("Super High"), and fall flat on your face if/when you went away to a "real" college or University.
Posted by drjim at 6:20 PM