New Sights For My Remington 870 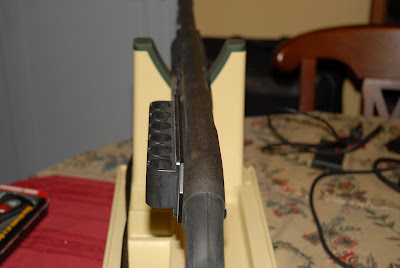 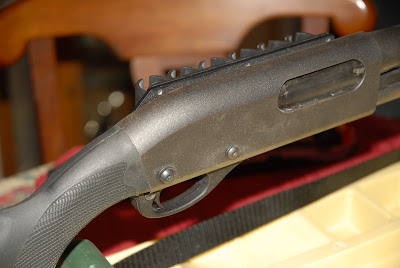 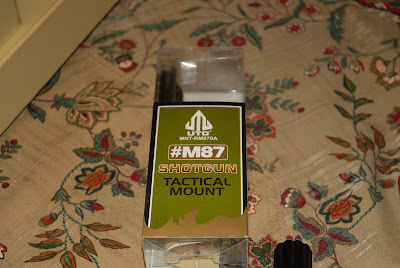 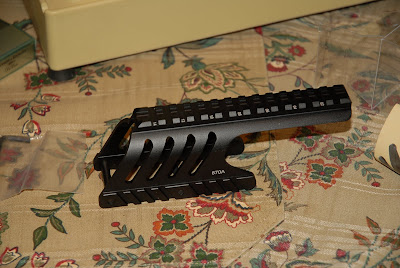 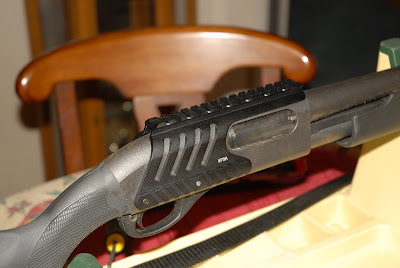 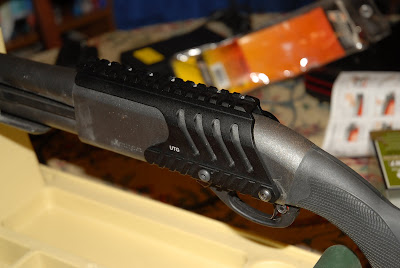 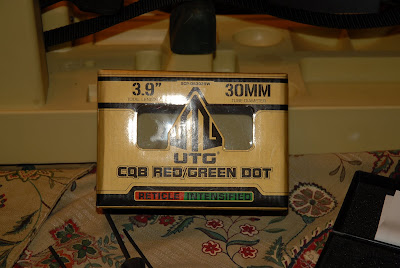 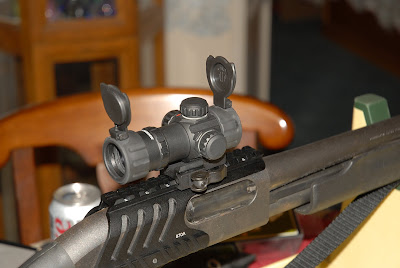 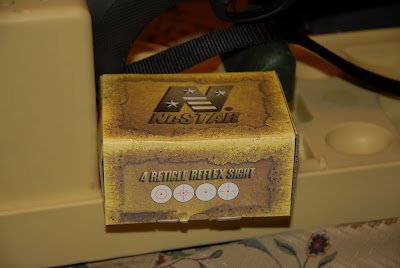 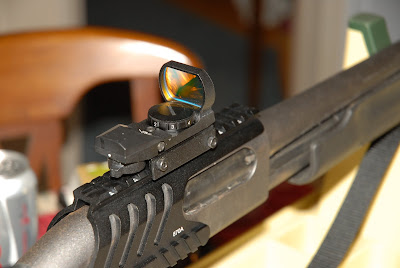 Although I'm not sure I like them.....
First, I had to take off my Side-Saddle, and if there's ONE thing they really drilled into us during Tactical Shotgun I & II, it's that you GOTTA keep the thing FED!
Shotguns have a devastating amount of power and speed, but they go through ammo like nobody's business. Even though I wore cargo pants during the drills, and had my pockets stuffed full of shells, there were still times I needed the extra six shells the Side-Saddle provided. And it was a good place to keep slugs so that when we did the "Select-A-Slug" drills, they were right there, separate from the other ammo I had on me.
The rail device I added is a UTG "M87 Shotgun Tactical Mount", and it's made very well. It's notched along the top of the rail, supposedly so you can use your existing front sight, but I think at any distance beyond across-the-room, it would throw your aim point off. I'll try it at the range with the sight removed to see if I'm right.
And it sticks up far enough that I can look under it, and use the flat on top of the receiver, and the front bead sight, just like I'm used to using.
The first sight I put on it was a another UTG product, their SCP-DS3039W Red/Green Dot sight. I'm not sure if this is a "proper" sight for a shotgun, as it seems to have a more restricted field-of-view, but it was a good price, about $50.
The next sight I put on it was an "NcStar D4B 4 Reticle Reflex Sight" that I got on eBay for about $50.
This is more to my liking, as it's more "open", and I think target acquisition would be faster.
The problem as I see it now is that BOTH of these sights stick up really far compared to using the flat on the receiver and the front bead sight, and when I bring the gun to my shoulder and get a good plant on it, I've got to really look up to use them.
I won't know how badly this messes up the way I've been trained to use the gun, and I hope I can relearn sighting it properly, as I think almost anything is better than the "sights" the 870 comes with!
If I don't like / can't adjust to using these, I'll pull them off, drill and tap the top of the receiver, and get some ghost ring sights for it.
And yes, that poor guy *is* rusty! I had no idea it had that much surface rust on it until I looked at the flash pictures.
I'm embarrassed that I let it get that bad. I guess that what happens when I keep it in the bedroom, and the window is open at night.
Guess I'll get to learn about rebluing "Real Soon Now"!
Posted by drjim at 6:53 PM