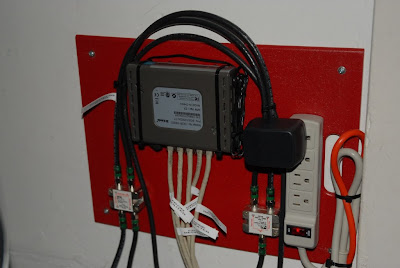 WHEW....I'm finished with the project, and it works fine.
Signal levels at each Set Top Box increased by 6~7dB, and the Signal-to-Noise ratio improved by a similar amount. My wife can now watch programs recorded on the home theater DVR without having them break-up/artifact/pixelate, which made watching them before an exercise in frustration.
I finished the little network panel this morning, and mounted it in the closet. I cut over all the Ethernet connections first and tested them, and now everybody's PC zips along at full FiOS speeds, 35 meg up and down. I was able to retire THREE wireless routers I had been using as Ethernet "bridges", and get rid of the Cat5e cable I had running from the main FiOS router in the living room to my stepson's bedroom.
Removing unsightly cables draped all over the place goes over very big with your spouse!
And I no longer have the "Looking Up...." or "Page Timed Out....." messages in the browser on my PC. I knew I had some DNS issues between the wireless bridge I was using and the main router, but I could never get them nailed down. Now, with a wired connection (well...there's a couple of GigE switches in the path, but they're 'transparent') to the main router, those problems are gone.
After getting the network tested, I went ahead and cut over the coaxial part of the system. At first I was going to just run a jumper from the existing coax out of the ONT (Optical Network Terminal) and the new coax I installed, but after I pulled the access panel off, I decided to just connect the new coax into the network panel in the closet. I switched all the cables on the Verizon router and STB's , and then power-cycled them all to let the network reset and come back up.
Everything worked!
My wife was surprised that I had some doubts about it working, but until you flip the switch, you never really know.
Tomorrow I'm going to remove all the old double-coax on the outside of the house, and push the old cables down through the floor and seal the holes. I'll pull it all up through the hatch in the closet floor, and dump it in the recycle bin.
There's not much copper in this type of coax; the center conductor is copper-plated steel, and the shields are all aluminized mylar foil, and aluminum braid. The new coax I used has a solid-copper center conductor, and two layers each of foil and braid, hence the term "Quad Shielded".
This is a project that I've wanted to do since we got FiOS installed, and it's finally done!
at April 12, 2011