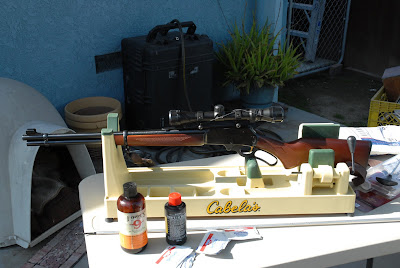 Well, I finally had the time today to a) clean both of my Marlin rifles, and b) use the Cabela's Gun Vise I bought a few months ago.
I don't mind just plunking my pistols down on a bench top when I clean them, but cleaning a long gun can get unwieldy when it comes to pushing the patch and bush through the barrel, so it's better to support them some way.
Enter my Cabela's IK-227687 Gun Vise. The vise is made from some kind of plastic, has a padded clamp on one end, a movable support in the center, and V-type holder on the far end. It has lots of molded-in nooks and crannies to store small parts, and so far appears to be solvent-resistant. It normally goes for $49.99, but the night I bought it it was on sale, so I paid $39.95 for it.
Seeing as today was gorgeous outside (sorry, people back East!)I took all my stuff outside, and clamped my Marlin 336 in it to check the fit. It fits great, so then I took the rifle back out, and removed the lever, bolt, and ejector spring so I could get my cleaning rod down the bore. Yes, I pulled the scope off so it wouldn't get sprayed with Hoppe's N0. 9!
Since I didn't have a "30 cal" cleaning rod, I started to use my shotgun rod. OOOPS! It doesn't fit down the bore! The I remembered I bought a "30 cal" Hoppe's BoreSnake a couple of weeks ago, so I got that out. So much for using the gun vise on my 336! Now maybe I'm old fashioned, but I like to run a soaked patch down the bore, let it sit a while, then push a bronze brush down the bore, followed by another soaked patch. I repeat this until the patch comes out clean. Using the BoreSnake sure is fast, though, and until I get a proper sized rod, I guess it'll have to do. I soaked the first 6" inches or so with No.9, and pulled the snake through 5 or 6 times, then put the 336 together, wiped it down with a "Barricade" cloth, and put it back in the gun case. It will be interesting to see if the patch/brush combination reveals any crud left in the bore from using the snake.
Cleaning my Marlin 1894CB in 357 went fine using the "shotgun sized" rod while the rifle was clamped in the gun vise.
All in all, I think this thing is a worthwhile investment, especially considering I bought it on sale. It has numerous warnings to NOT use it for a shooting rest, but it comes in handy for resting the rifle in while cleaning it.
Posted by drjim at 3:53 PM