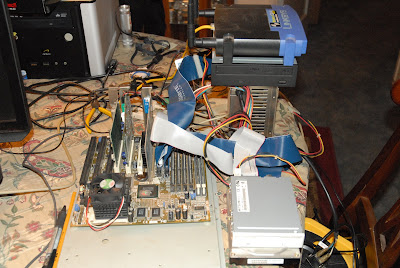 Well, I finally got enough stuff dragged out of the garage to get a decent PC put together to run "Grim Fandango". My first attempt with the old HP Vectra VE didn't work very well. I had trouble getting the game to install, and it wouldn't play. Then the audio quit working, and I couldn't get it to come back, so rather than spend more time troubleshooting it, I went deep into the bowels of the garage this morning, and dug out what I thought was enough stuff to get something decent running. It took a while, but my trusty FIC VA-503+ motherboard was located, and I spent some time brushing the dust off of it, cleaning the connectors on it, and making sure the fan on the heatsink was good to go. Then I located an AT-style power supply, a 40 GB IDE hard-disk, an IDE CD/DVD drive, a floppy and cables for all the drives, an AT-to-PS/2 keyboard adapter, a 3Com PCI Ethernet card, my Aureal Vortex PCI soundcard, and got my BIG box of memory modules out. I loaded the board with two 64 meg sticks of PC-100 SDRAM (PLENTY for Win98!), checked all the jumper settings, plugged in an ancient NVidia AGP graphics card, crossed my fingers, and powered it up. It powered up OK, but the BIOS settings were all out-of-whack, so I shut it down, and put a new CMOS battery in after cleaning the coin-cell holder contacts. I booted it back up, set the clock, and checked some other settings, as replacing the CMOS battery usually restores it to the OEM default settings for things like type of drives installed, which video slot gets initialized first, and a host of other things. The Windows98 install went OK, but I couldn't get the NVidia drivers to work right with the card, so back out to the garage. I found an ATI "Rage 128 Pro" still in the box, so I brought that back in. As a rule, I prefer NVidia cards over ATI (now AMD) for gaming, but the only other NVidia cards I have for an AGP slot are newer GeForce cards, and the Grim Fandango forums indicate they don't work as well as an older card. I loded all the correct drivers, did the "Windows Update" routine (download, reboot, repeat), and made sure the basic PC was running OK. The heatsink on the video card runs cool-to-the-touch, as does the heatsink on the AMD K6-III/450 MHz processor. Got the game loaded, and it runs smooth as silk! This PC would have been pretty "Hot Stuff" back when the game was released, and even though it runs smooth, the graphics aren't up to the standards of today. "Grim Fandango" was unique in that it used very high quality static backgrounds that the characters moved in relation to, so it has a unique look to it.
I'll post another picture later in the week after I get everything mounted into the new case I have coming. And I still have to find the drivers for the motherboard so I can get things like the drive controllers and AGP slot running at maximum performance. There aren't any "Yellow Ball Exclamation Points" in the Windows Device Manager, but I distinctly remember from using this board years ago that having the correct drivers makes a noticeable difference in performance.
Time to hit the hay here, and listen to the rain. We've had 1.9" since midnight, and more is on the way.
at December 19, 2010