Back From The Range 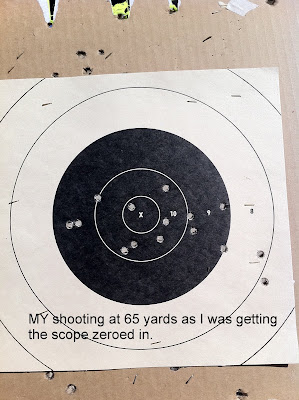 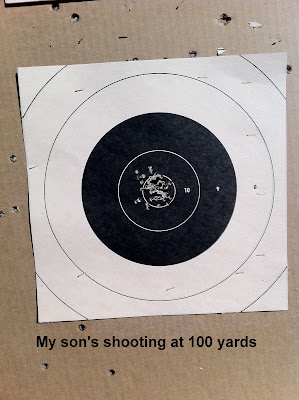 And man, am I beat!
I fired SIXTY ROUNDS of 30-30 out of my Marlin 336, and my shoulder is gonna be sore tomorrow! Took about 30 rounds for a rookie like me to (in no particular order):
a) Figure out how to _use_ the scope (I forgot it was 3x to 9x!)
b) Figure out how to use the _spotting_ scope
c) Get smart enough to move the target back in from 100 yards so I could actually get hits _on_ the target
and
d) Get used to shooting the rifle!
After the first five or six rounds, my son loaned me one of those little plastic clamp-on bipods, and I started shooting my Marlin 1894 in 357 to see if I could even hit the paper at 100 yards. I did better with that little guy and its iron sights than with the 30-30 and the scope as it came out-of-the-box. After a few 357 rounds, and adjusting the rear sight, I was getting _all_ the rounds "In The Black", and a good portion into the middle circle, with my 1894!
I was stunned that I could shoot my sweet little 1894 that well at 100 yards.
But back to the 30-30.
During the 5-minute "cease fire" when we could change targets, I pulled the target in to 50 yards. With the 30-30 now more solidly supported by the bipod, and the target in closer, I was finally able to start hitting the paper consistently, and slowly, one-click-at-a-time, I worked the scope adjustments to where what I was aiming at, was close to where the hole in the target was after I fired. Not a good way to explain it, but it was a long drive home in L.A. traffic, and I'm kinda beat.
My son had his Savage .17HMR with him, and he was tack-driving all day long! At 100 yards, he can shoot the center out of the target. Must be nice to have 24 year old eyes! I was suitably impressed, and even some of the guys at the range told him he was doing extremely well. He let me fire his rifle a few times, and it was a joy to shoot. Very low recoil and practically no muzzle blast, kinda like a 22LR on steroids, and I could hit about anyplace on the target I wanted to, which means it hit whatever point the scope had wandered to when I squeezed the trigger!
After several hours of rifle shooting we decided to move down to the pistol range for some practice. He had his step-dad's S&W 9MM, and I had my wife's 357 S&W revolver, and we had great fun blasting away the rest of the afternoon.
Final tally, 60 rounds of 30-30, 200 rounds of 357 (rifle and pistol use), 200 rounds of 17HMR, and 100 rounds of 9MM.
It was our first time at the Angeles Shooting Ranges, and we're definitely going back again. The place is first-class all the way, the staff is excellent, and even the rest rooms are clean! I highly recommend it if you live in the area.
The only nit I have to pick would be to make sure you take an old mouse pad, or other piece of soft, thick "stuff" to rest your elbow on. The surfaces of the shooting benches on the side we used are covered with some kind of indoor/outdoor carpeting that does a real good impersonation of 60-grit sandpaper! My right elbow is raw from rubbing on it, and the other shooters I talked to there said the concrete ( ! ) benches on the other side are just as rough on your elbow..
Sorry we didn't have time to take any 'good' pictures, but my son is supposed to send me the few he took with his iPhone camera, and I'll post those when I get them.
I'm off to the shower, and tomorrow will be Gun Cleaning Day!
Oh, and we had a ball doing it.
at December 02, 2010