Rise of the Muffler Men 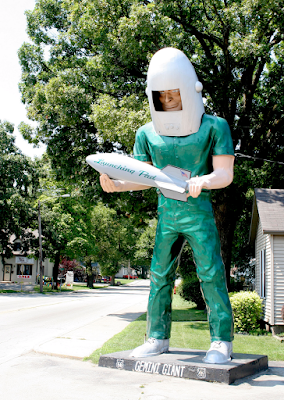 While browsing around on Wikipedia for something totally unrelated, I found a picture of the "Gemini Giant" fiberglass statue that stands in front of "The Launching Pad" in Wilmington, IL, one of my hot-rod haunts from days gone by. We always just called him "The Spaceman", but it turns out he's a member of the tribe referred to as "Muffler Men".
The first of the Muffler Men was a giant Paul Bunyan figure made for the PB Cafe in Flagstaff, AZ in about 1962, by Bob Prewitt of Prewitt Fiberglass. Most of the figures produced later by International Fiberglass came from that one mold, often modified to suit what the customer wanted.
The whole story is here on the Roadside America website, and is an interesting look into the people behind these giant glass figures.
For more info on the guys, just Google "Muffler Men", and you'll find more than I thought was possible!
at December 25, 2010