Here's the car up on jacks with the left front strut removed. She should be in the garage, BUT, my wife has started "staging" things to get rid of before we move to Colorado, and the garage has become loaded with "junque" again. 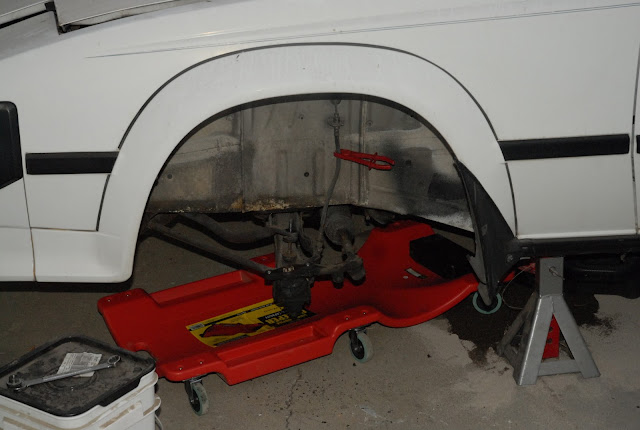 And here's the rest of the left front, with a bunch of worn out parts in evidence. 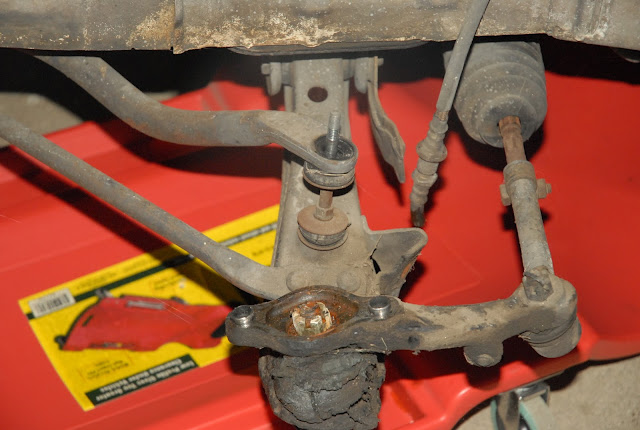 And to remove the BIG nuts on the struts, I bought a BIG wrench at Harbor Freight. My wife calls this my "Clown Wrench" because it's so big (to her) that it "doesn't look real".

When I removed the nut, I clamped the strut in the vise, got ready to give a mighty grunt, and the nut came loose with hardy any pull at all!

The wrench came in handy to tighten the new nut, though.... 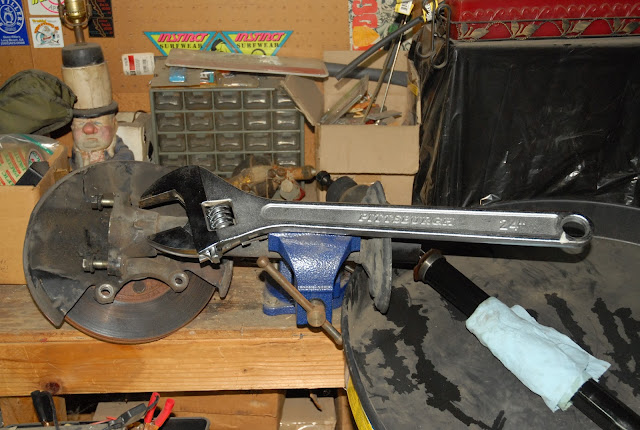 The top strut mount was toast, as seen by this "bottom view" of the bearing... 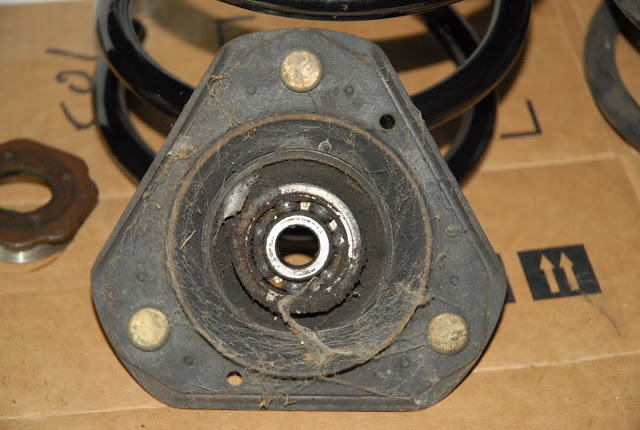 br />  Don't know if you can see the cracks in the rubber on the top, but when the car was sitting with the weight on the suspension, they were scary big.... 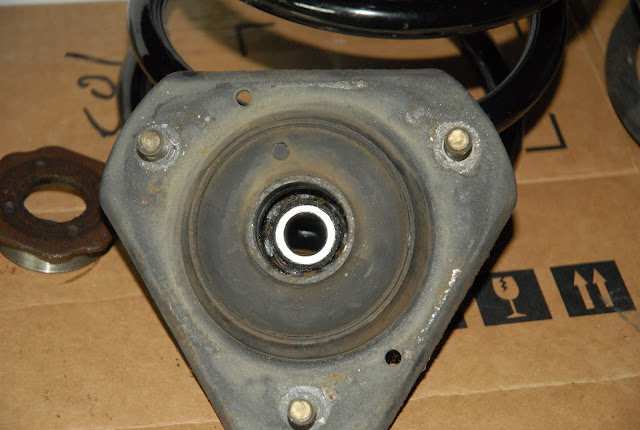 Here's the junky old Monroe "Sensatrac" insert. When the spring was off, I grabbed the rod and gave it a pull. It had about a HALF INCH of free play both ways before you could feel anything, and it gurgled when you cycled it. 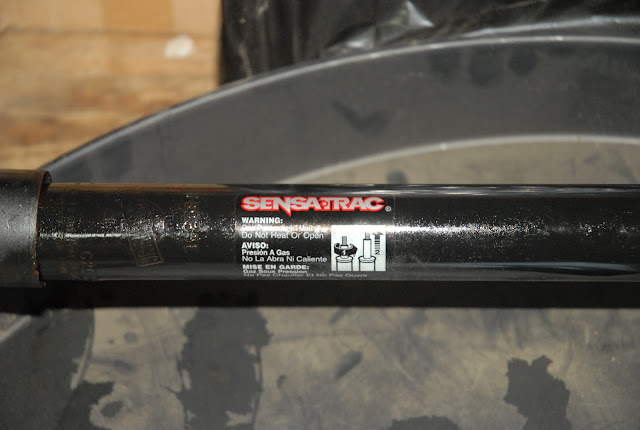 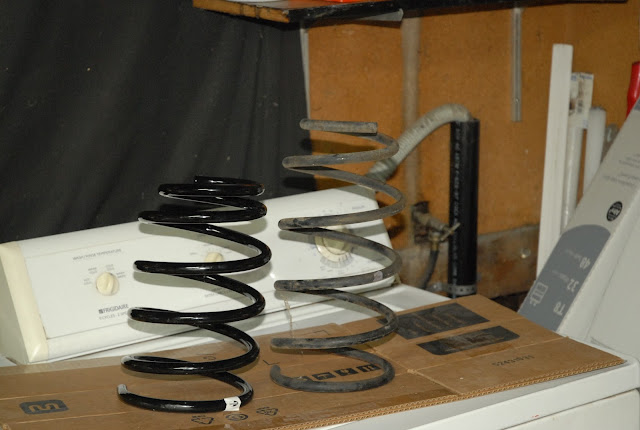 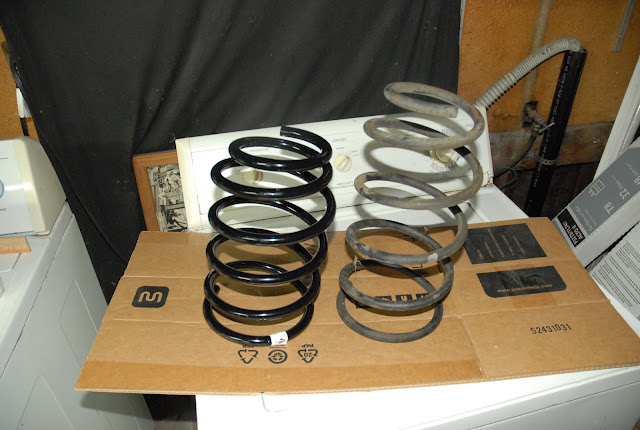 And for those that might care (the American Iron guys go nuts for this type of information!), there was a violet paint stripe / color code on the OEM spring. 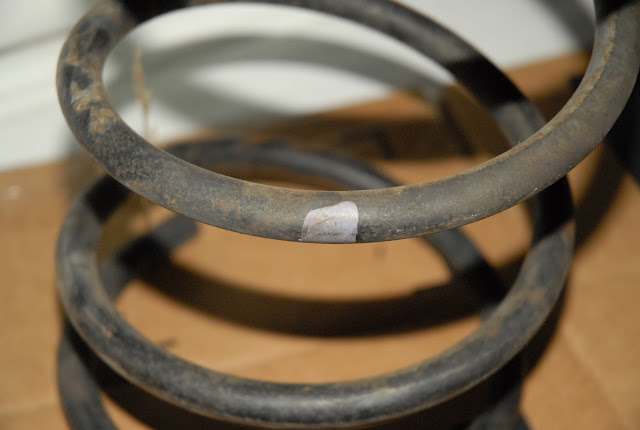 And here's the end result. A nice new shiny spring, new protective boot for the shock rod, and a new top strut mount.

Don't freak out about it being clamped in the vise jaws. It's barely tightened down to hold it for the photo, and when I did have it clamped down tight so I could torque the nut at the top of the new strut to 40 ft-lbs, I had two pieces of hardwood in there to cushion it so the jaws wouldn't bite into the new spring, possibly inducing stress fractures and weakening it.

As they used to say in the old Heathkit manuals..."This completes the assembly of this unit"! 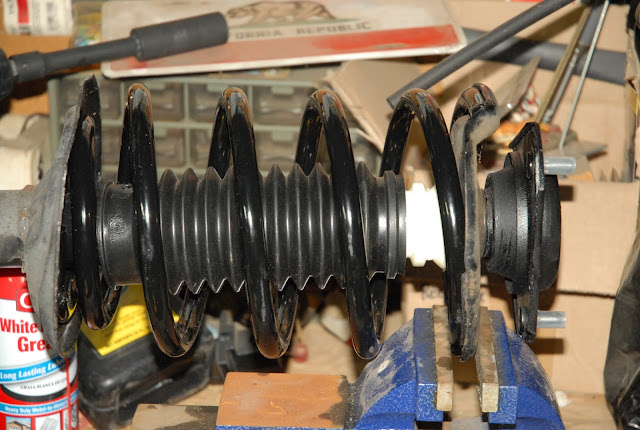 I'll get this one back in the car after I R&R the lower control arm and strut rod bushings and replace the rubber boot/bellows on the power steering rack. It's completely dry on this side, so that means the seals are OK, but a torn boot like that just bugs me, and since I have a new one, REPLACE IT, JIM!!!


Then all I have to do is wash, rinse, and repeat this on the passenger side, and the front end is finished for now.


I blew off going down to the Iowa today as I'm on a roll here, and if I keep going I can have both sides of the front finished by Monday or Tuesday.


I learned a couple of tips and tricks from the guys on the Celica Supra forum, and I now have a couple of tools that make the job  much easier, along with a huge assortment of Cotter Pins that Ill need to bolt everything back together.


So stay tuned for another exciting episode of "The Continuing Adventures of Dr. Jim and Ms. Swan"!


Not quite as much fun as Doctor Who and his companions, but a whole lot more real.....