Some of the tour today covered things I'd already seen and wrote about, like the Barbershop, Brig, and Laundry areas, so I won't go over them again.

We started in the Crew's Mess, as the passageway we would take was off the Museum Store.

While the steering gear compartment is armored, it's outside of the "Armored Citadel", which runs from just forward of the #1 turret, to just aft of the #3 turret.

The blue painted area shown below is the top of the aft end of the armor.

As you can see, it's really thick: 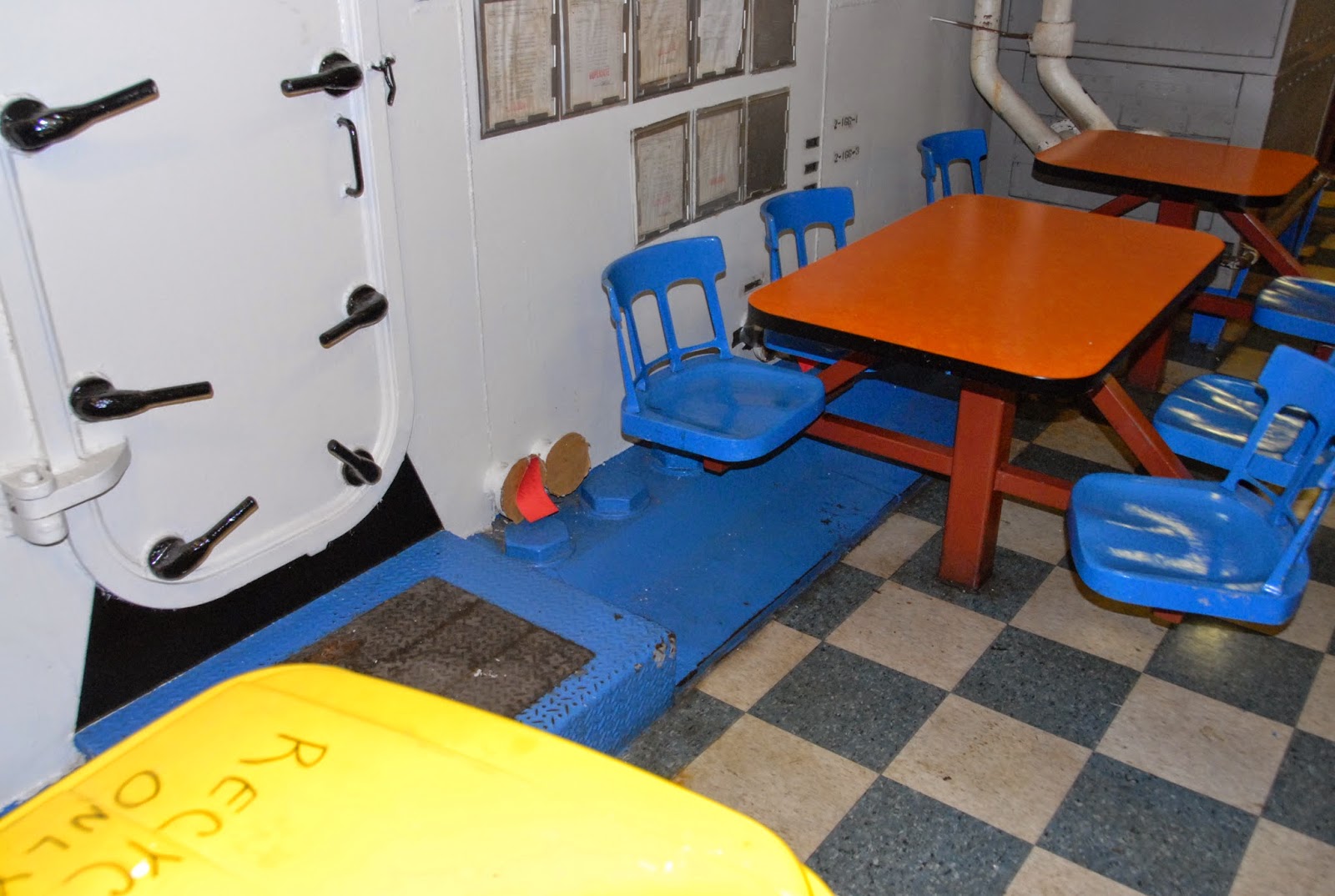 After we went down one deck, below this first armored deck, we passed by a hatch leading down to the 4th deck. The stainless steel door to the right leads in to one of the "reefer" areas where refrigerated foods were stored. If you look carefuly at the ladder going down, you'll see some "flaps" mounted on the sides of it. When these were moved to cover the steps, it made them into a ramp so boxes could be easily slid up and down the ladder. 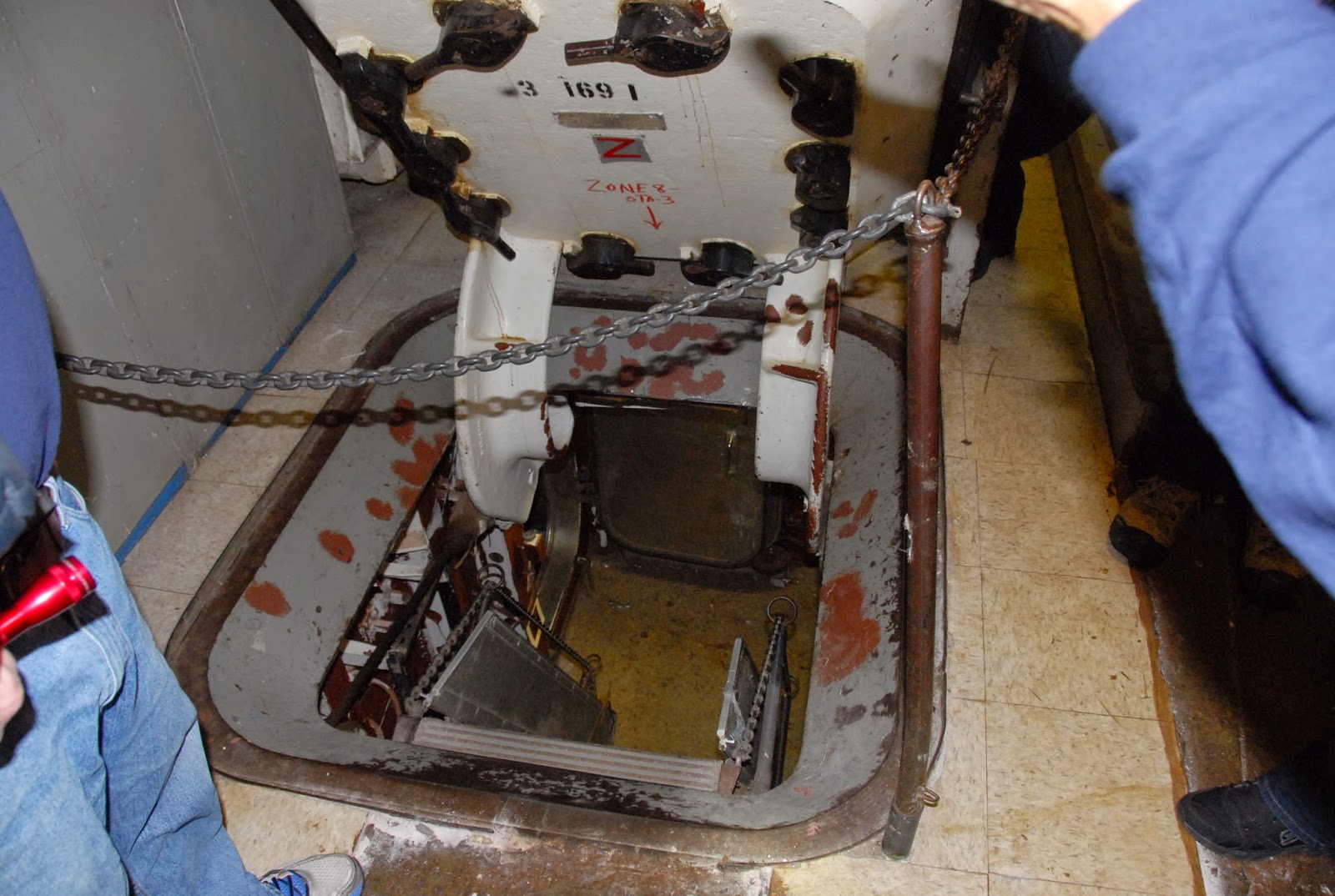 Here's another ladder going down to the refer area, and still another hatch under that, with grating on the bottom: 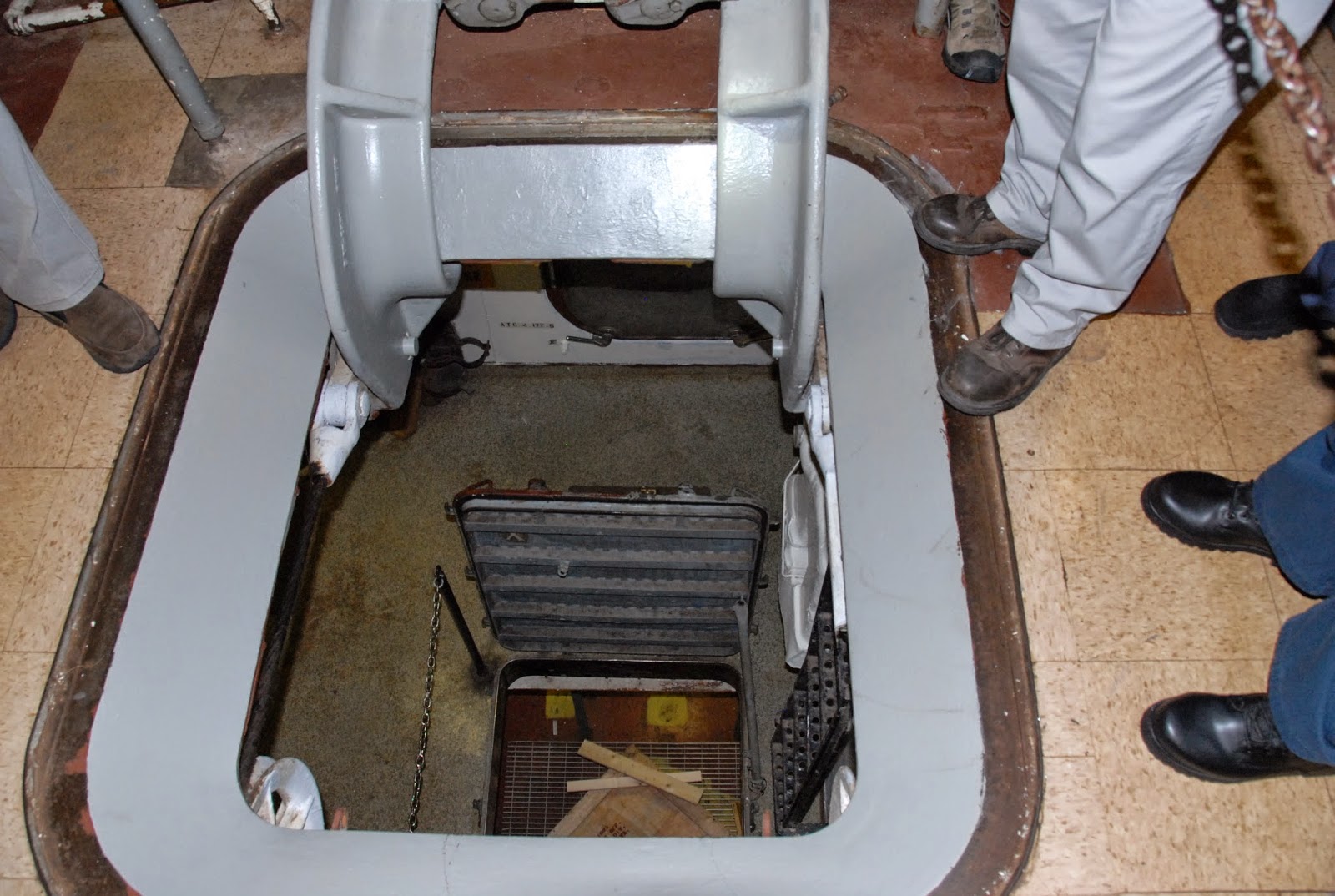 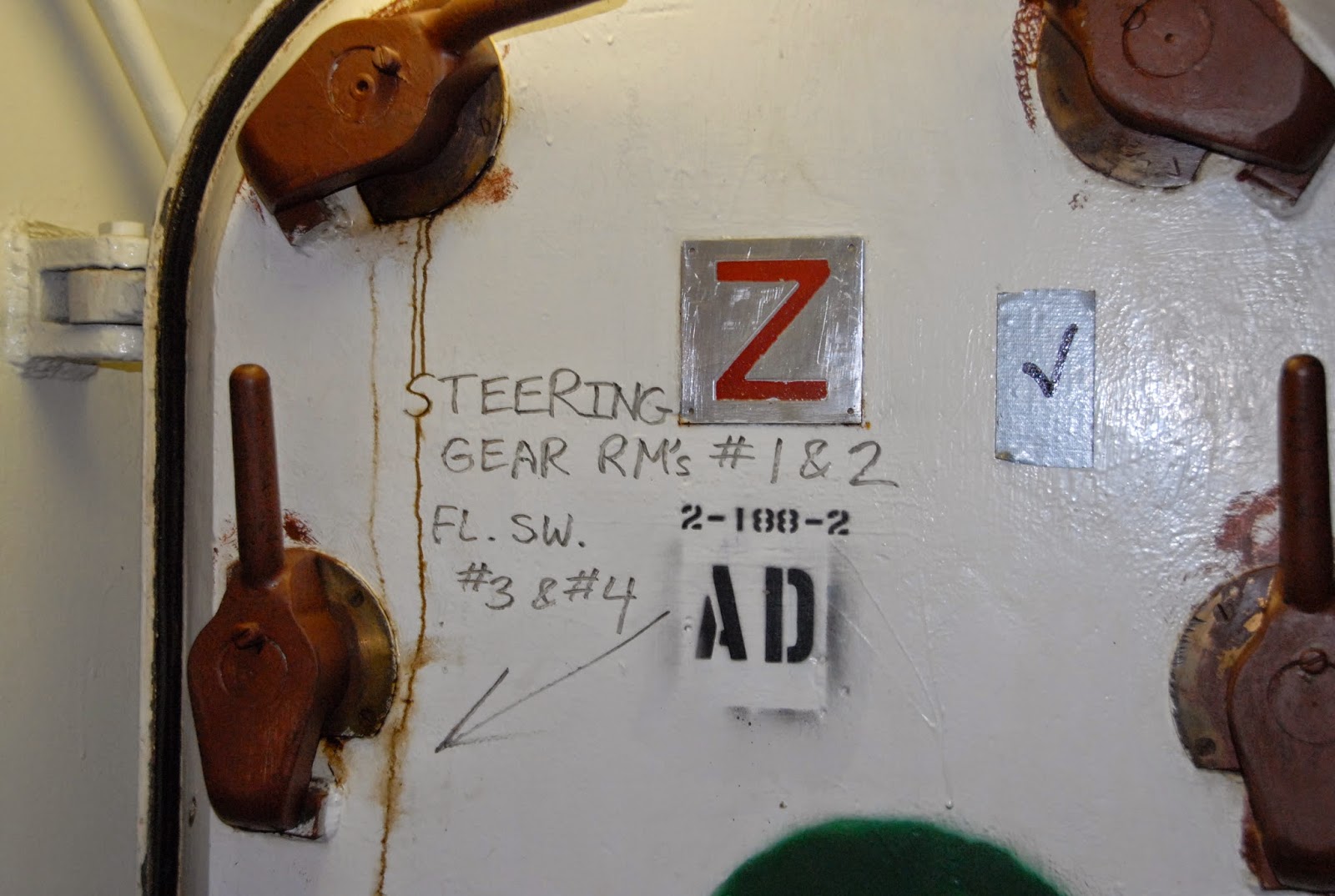 One more armored hatch to go through, and we're there: 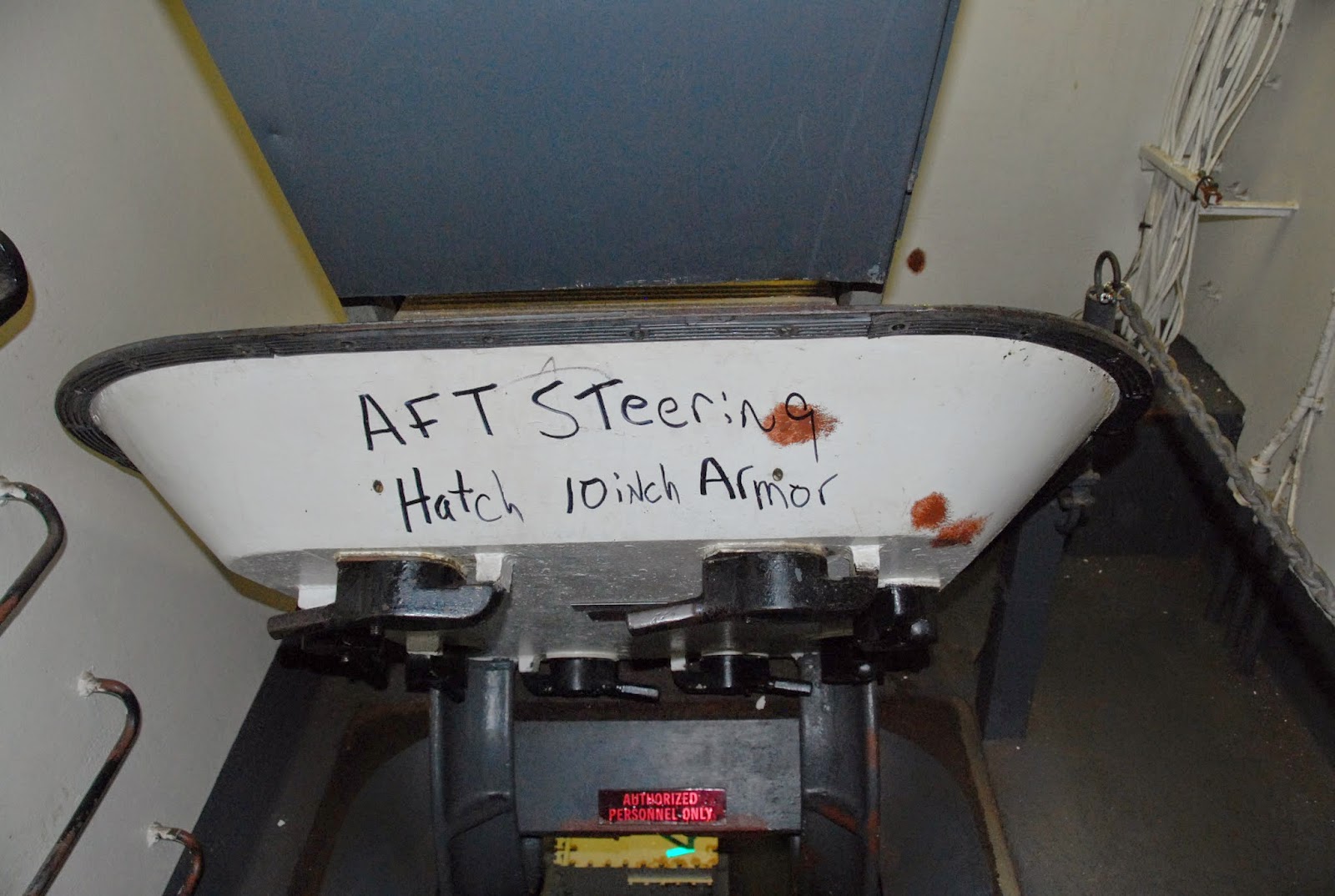 This is the control panel for running all the pumps and servos, and a place-of-last-resort to steer the ship from.

Notice the two bronze mounts in the picture. There are where the handwheels were located to manually (with hydraulic assist, of course) steer the ship.

The closer of the two got cut off in the picture, but in the one further away, at the bottom of the bronze mount, you can see a stub shaft with a white tag hanging on it. These were the stubs the wheels attached to.

The wheels were removed for some reason, and are "MIA" for the time being: 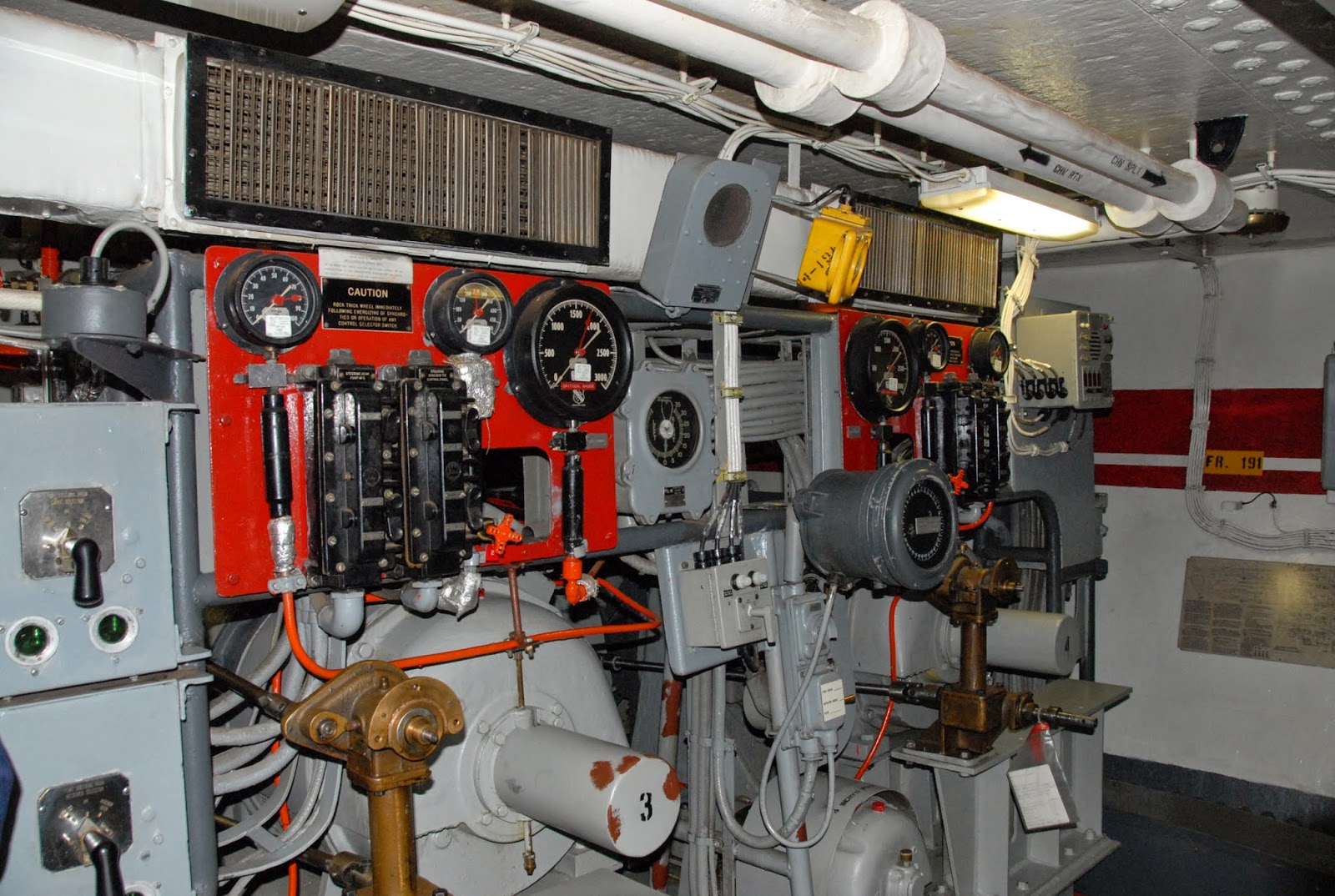 How do you know you're on the Port side? Well, besides the yellow painted designator with the frame number, there's a red stripe painted on the wall, red just like the Port navigation lights on the ship.

And notice the rows of rivets overhead. This was the top of the localized armored box the steering gear is in: 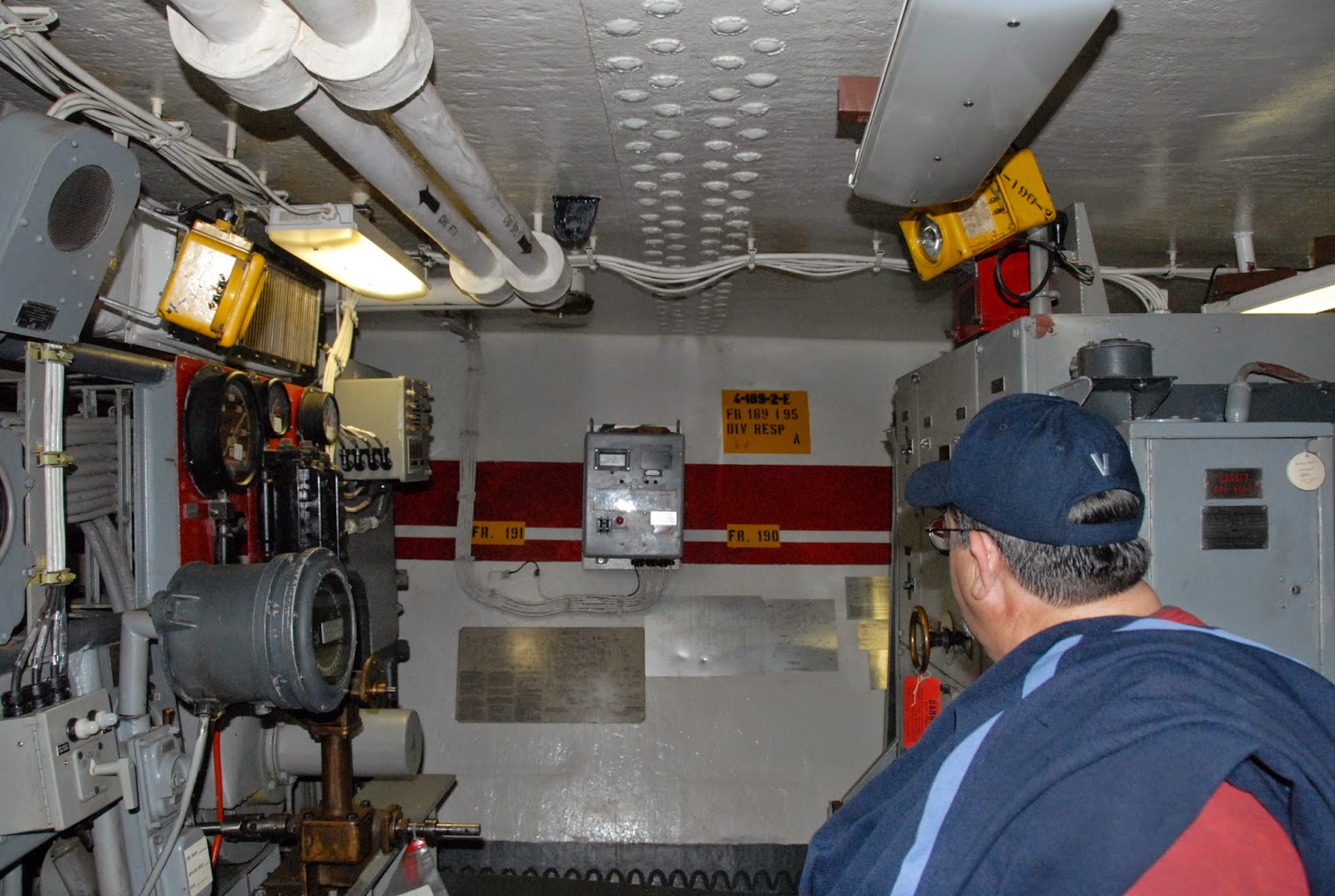 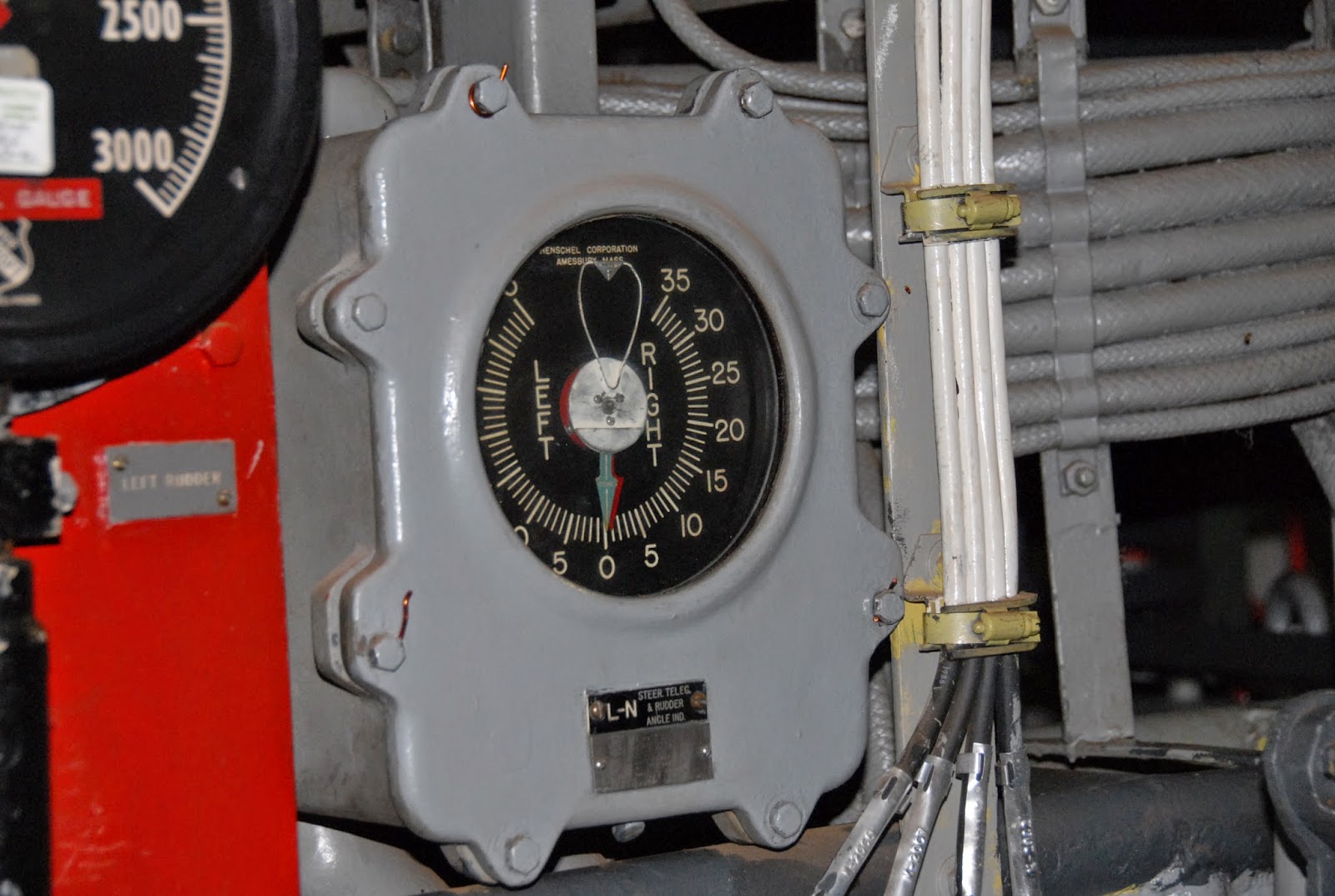 Aft end of the hydraulic rams that move the rudder. The large round plate in the left foreground is the top post of the actual rudder, and the "dogbones" on either side connect to the rams: 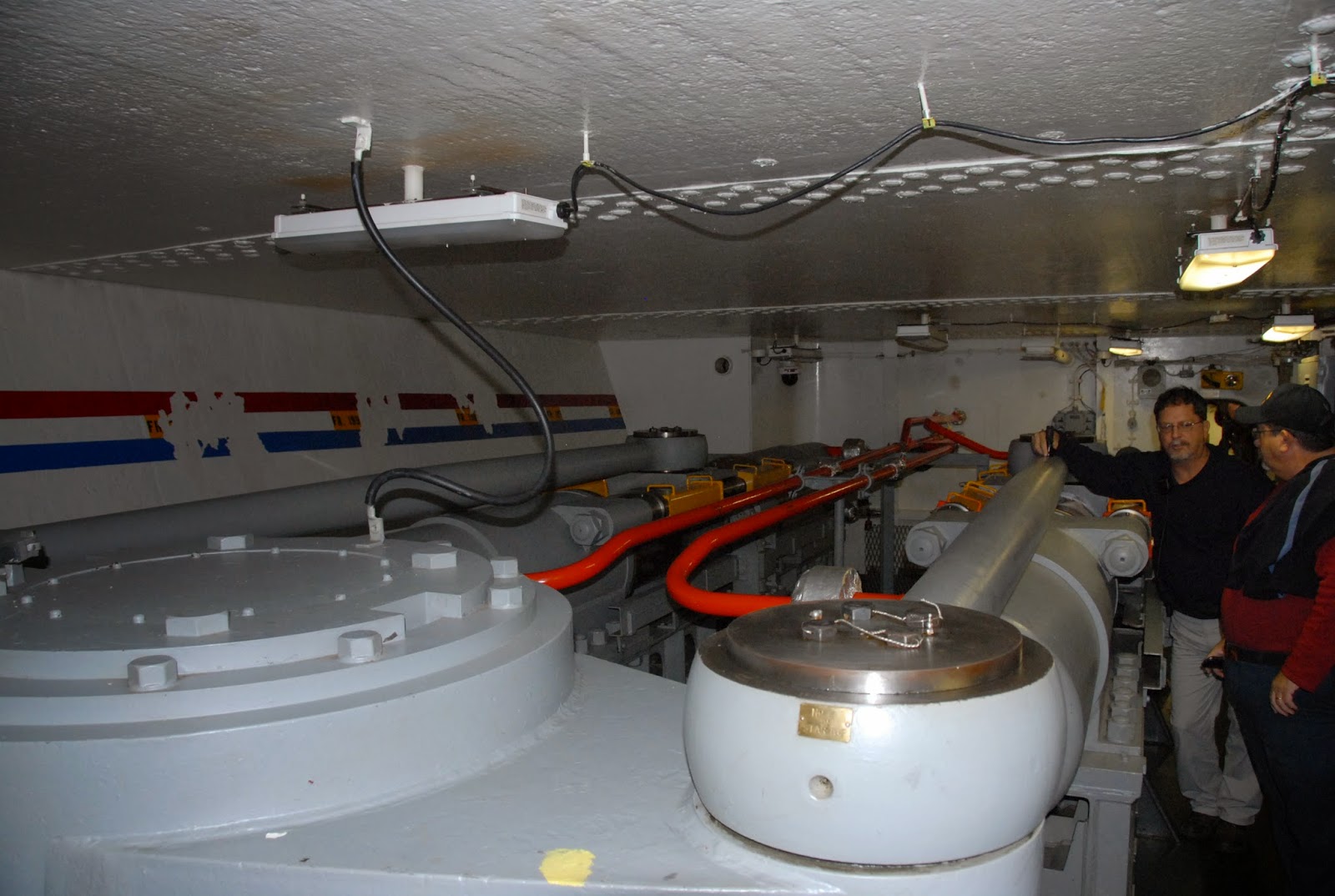 Close up of the brass tag on the dogbone: 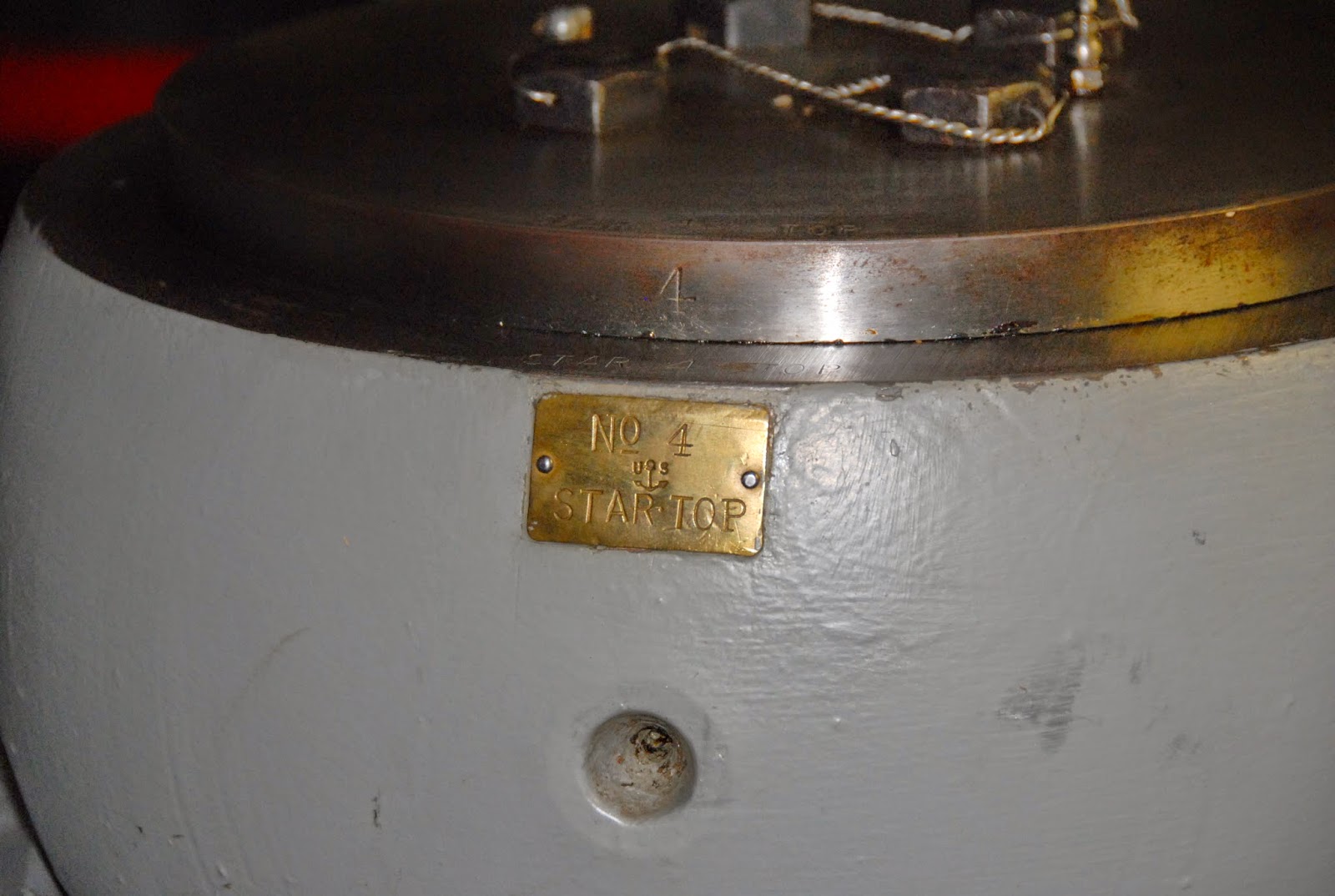 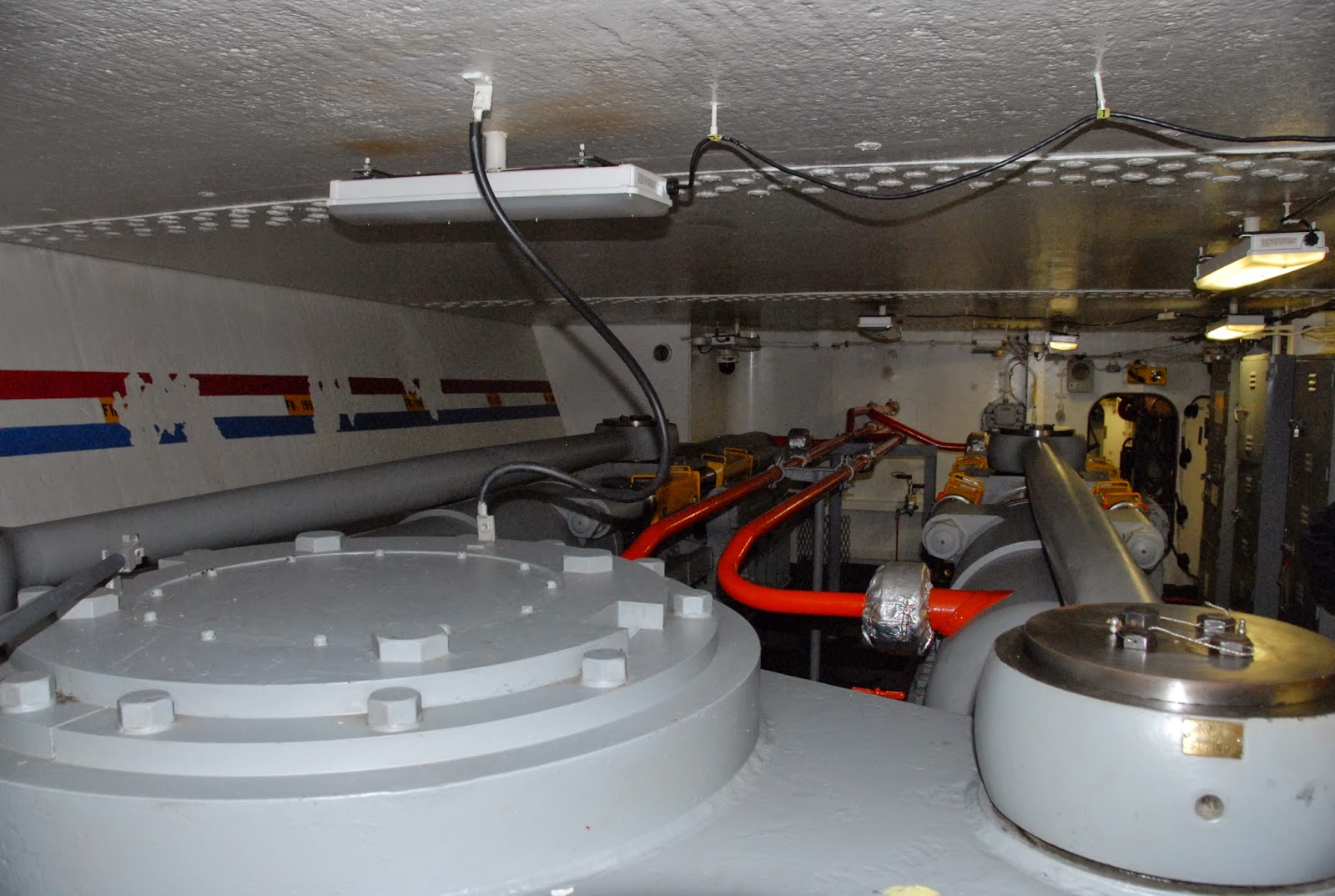 The hydraulic diagram of the system. Sorry for the flash hot-spot: 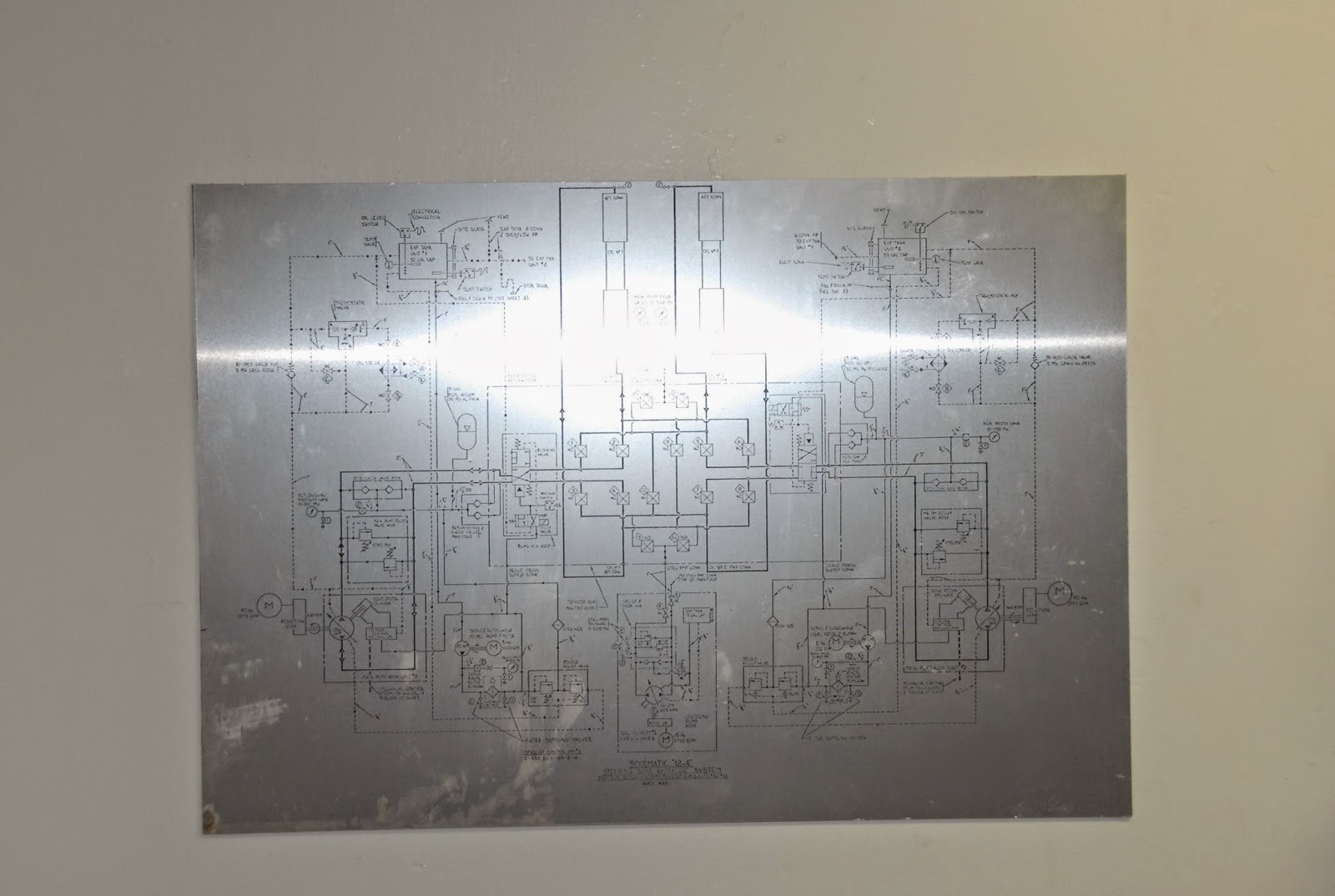 And a drawing listing all the lube points, and what type of grease/lube to use: 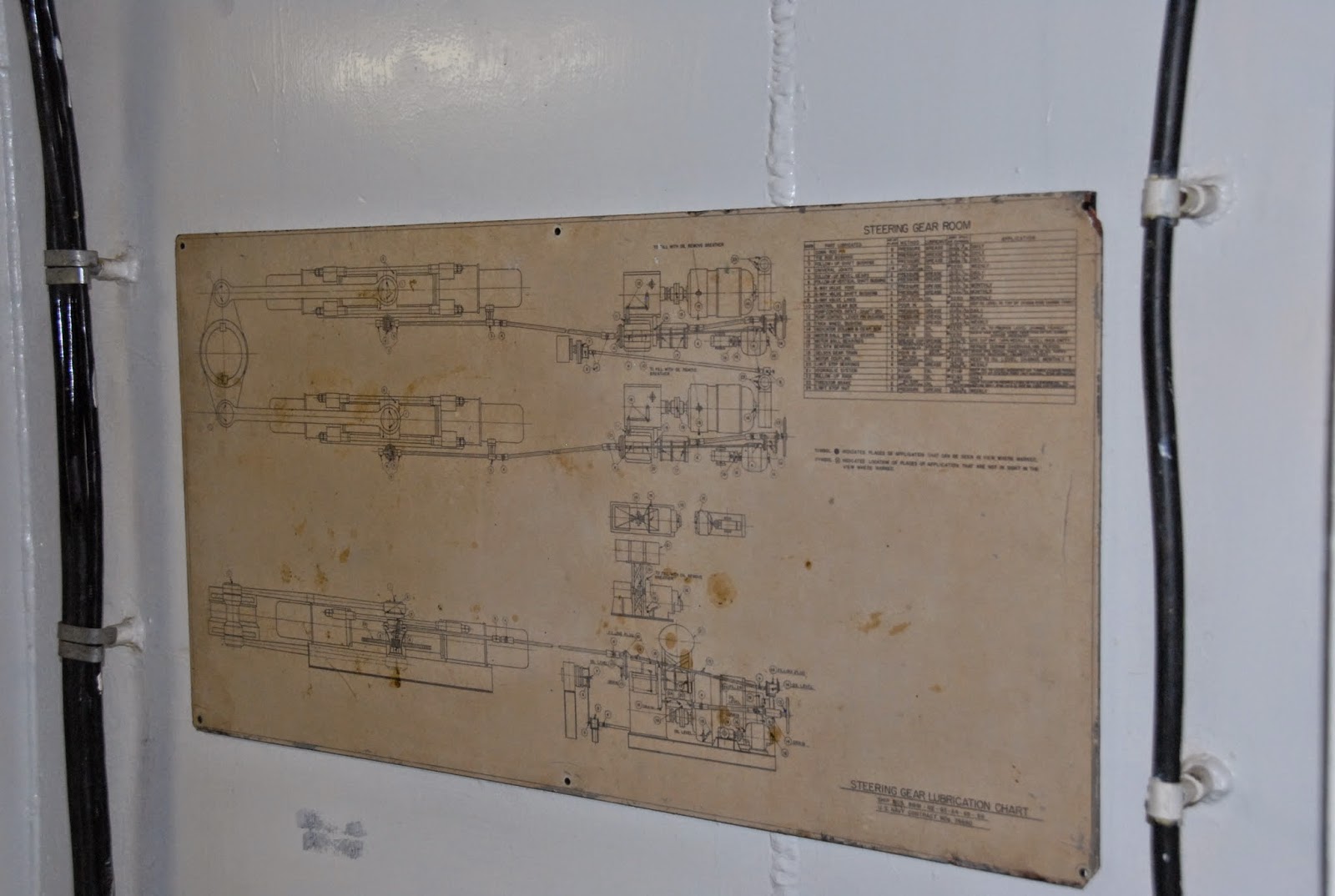 So, that was today's behind-the-scenes tour. While we were sitting in the barbershop, the question of "Turret Tours" was brought up. Turret #2, where the accident occurred, is absolutely OFF LIMITS, as it's a memorial to those who died in it. Current plans are being discussed for turret #3, and include putting in a plexiglas "bubble", where people could at least climb partly in to the turret, and look around, and a Virtual Tour" of the turret, being put together by one of our volunteers who's extremely good at taking panoramic photos, and stitching them together, giving views similar to what The Smithsonian does for some of it's aircraft interiors.

I've seen his panoramas of the radio room, and some of the superstructure areas, and their amazing.