New Project For The New Year!

For the last year or so I've been dreaming of a Project Car to get me back to my Hot Rodding/Racing roots, and with the approval of my loving wife, I started seriously considering different cars that I've known and loved, along with my modest budget consideration.

1967 Mustang fastback with a small block and 4 speed?

Same with Camaros, Firebirds, Barracudas, and other Pony Cars.

I tossed around the ides of maybe a Toyota MR2, or a Mazda Miata of certain model years. One of my ideas was to get a Miata, and put in a small-block Ford (they're several inches narrower than a small-lock Chevy), but then I ran afoul of Kaliforniastan's arcane smog laws.

The engine has to be the same year, or newer, than the car it's going into, and the completed vehicle must have all the smog equipment for the car, and for the engine.

Exceptions are possible, but either inconvenient (convert it to run on propane or 100% ethanol and you get a pass), or very expen$ive to accomplish.

Now mind you, this will NOT be my daily driver car....it'll be a week-end/nice day/warm summer evening car, and will maybe get a few thousand miles a year put on it. Considering I only drive about 5,000 miles a year normally, I doubt I'd come anywhere near to "a few thousand miles", but the Smog Nazis don't care about, and have no reasonable provisions for a Special Interest Vehicle.

Never mind that my cars are always properly maintained and tuned, The Smog Nazis of The People's Rebuplik of Kaliforniastan has no place in their stone-cold hearts, or their little reptilian pea brains, for a "fun car" that's rarely driven. No, in the fine bureaucratic spirit of  "It's For The Children!!", we simply can't have citizens driving around in unregulated cars.

The cut-off date for "smog exempt" cars used to be a "Rolling 25", but they've since capped that to "1975 or earlier", coinciding with the general beginning of the Catalytic Converter Era. This has driven the price of pre-1975 cars through the roof out here.

So, I started thumbing through old car magazines, and old memories, and came up with a list of what I considered suitable vehicles.

Well, anyway.....I've wanted a "MKII" Toyota Supra ever since I first saw one. The Mark-II was first released in 1982, and was supposed to be discontinued for the Mark-III at the end of the 1985 model year, BUT the new Mark-III wasn't quite ready, so Toyota keep the production line rolling until about half way through 1986, when the Mark-III was introduced as a "1986-1/2", similar to what many other car companies have done.

The 1985/86 cars were the  best sorted out ones of the genre, with the highest horsepower and torque figures, and all the bugs worked out of the electronics. These cars are right on the verge of being recognized as "Classics" due to their design, features, build quality, and low numbers, but the car collecting world hasn't quite gotten hot on them yet..

I started looking about 6 months ago, using eBay, Craigslist, Auto Trader, and Google, and found that what I considered "good ones" were getting hard to find. Almost all of the ones I looked at had trashed interiors (and "soft item" parts are difficult to come by), had been wrecked and poorly repaired, had been turned into a "Drift Car", were way overpriced for their condition, or had 300,000+ miles on them (Toyota reliability!) and needed a complete overhaul.

A couple were "All of the Above".

And then I found this one. The original owner in Riverside/Redlands, California had it from April 1985 until June of 2013. I don't know why he sold it (possibly estate sale?), but he sold it to a woman who was planning on using it for a gift/bribe to her son if he finished high-school, got a job, and straightened himself out. He didn't, and after months of keeping the car, she sold the car to the third owner, the guy I bought it from. He only had it three weeks during which his girlfriend gave him unmitigated grief over "You have too many toys now, we don't have a place to keep it, your grandma is getting tired of your three motorcycles and boat over there, my car has to sit on the street because even our driveway is full of your stuff, and if you don't get rid of SOMETHING, I'M leaving!".

After contacting him via Craigslist email, we finally made arrangements to meet on December 31st. My wife drove me to his grandma's house, where I spent a good 30 minutes crawling over it with a flashlight waiting for him to get there. Finally after 30 minutes I called him, and he was "Oh SHIT! What time is it? I just upgraded my iPhone, and now the clock is off!", which I believed as the same thing happened to my son.

My wife thought he probably didn't want to sell the car, but from his emails and phone calls, I thought he was serious about it.

SO....the wife and I spent another 20 minutes going over the car together waiting for him the arrive. She thought it was an exceptional car for being almost 30 years old, although it definitely showed the effects of sitting in the high desert for 8 months, and being a high-desert car from it's "birth".

After he got there we talked a bit, he got the keys out of grandma's house, and after connecting the battery, it fired right up, and within a few minutes the idle was coming down, the water temp was coming up, the oil pressure looked good, and the tach was steady.

The wife and I took it for about a 20 minute test drive, and she was impressed at how smooth it ran, rode, and how much "pep" (her words) it had. I was pretty happy with it, and she told me that after all the other junk we'd looked at, she thought this one seemed like a good buy, but "Offer him $2500 and see if he takes it"!

Since it was advertised as having "new tires", and it didn't (they have 6,000 miles but SIX YEARS on them! Sidewalls have some cracking, but they have plenty of tread), I tried to negotiate him down $200 to cover about 1/3 the cost of a new set.

No deal. He told me he had over 100 emails from Craig'slist, and several other people waiting with cash-in-hand, and while he'd rather see it go to me than to some "punked out kid who'll race it and destroy it", money was money, and he wanted $3000 FIRM. He reminded me that he'd already stalled several other people so I could get first dibs on the car if I wanted it.

I paid him the three grand, and drove it home.

Here she is, getting her first oil change in God-only-knows how long: 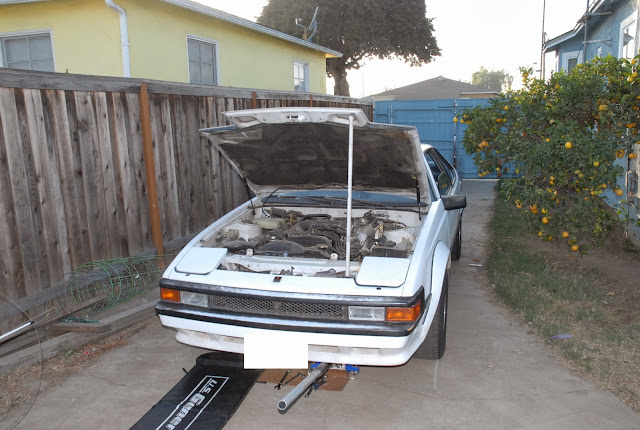 Yes, the hydraulic lift cylinders are shot, requiring a piece of PVC pipe to hold the hood open, but new ones are on the way.

All original, NO leaks: 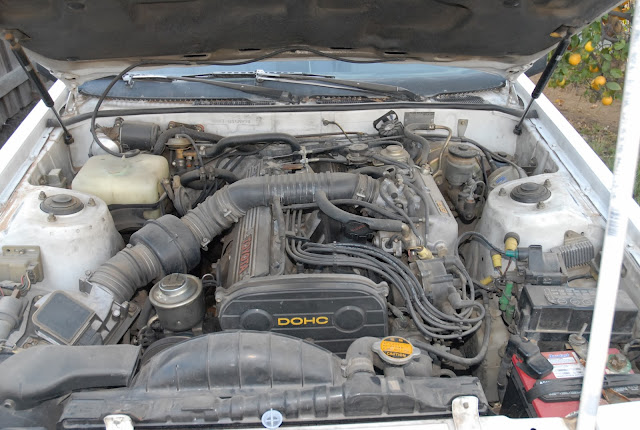 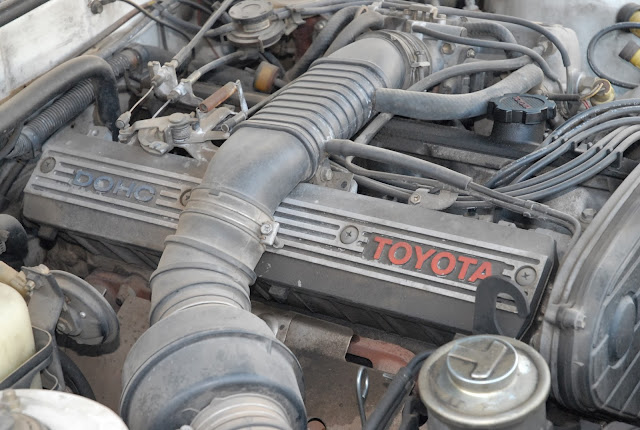 No corrosion, but LOTS of desert dust! More under-the-hood originality. The tops of the strut mounts are cracked, but since I'm planning on replacing the front struts/rear shocks with KYB units, all this will be replaced: 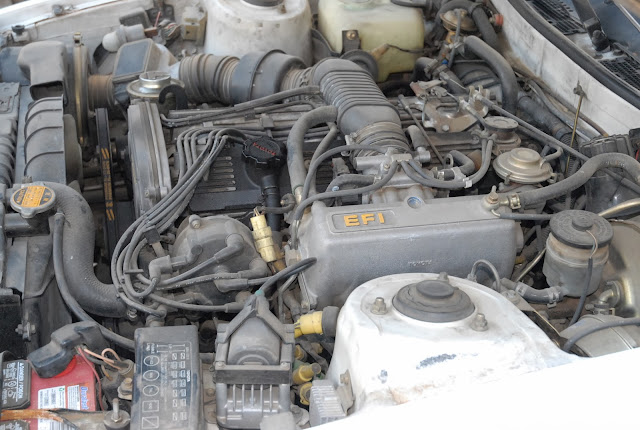 There was black plastic cladding over this stainless door beltline window molding, but they were so cracked and split I peeled them off and tossed them. They weren't salvageable at all.

Notice all the sand/dust that was trapped under the molding: 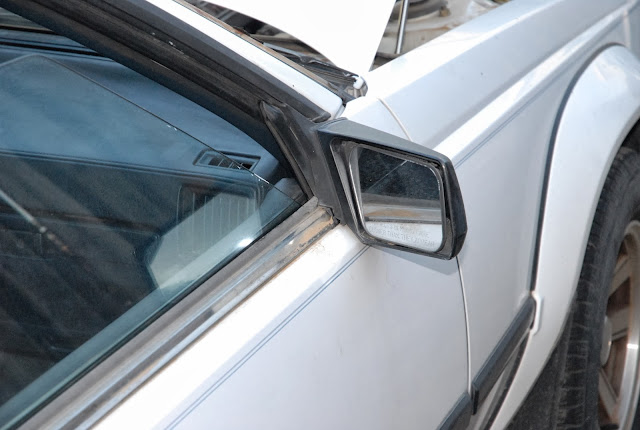 Same with the windshield trim. All the black coating is peeling off, and looks terrible, for now. IF I can get OEM or good used parts, that's what I'll go with, but since some of these items are now 'unobtainium', I may just take the trim off, clean it of all residue, and have it powder coated: 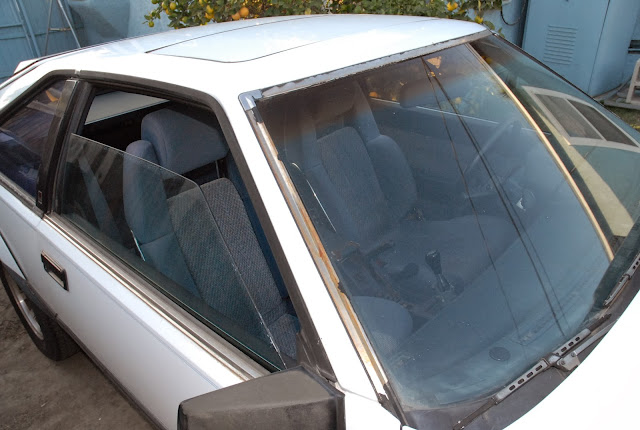 The Supra "billboard" decal is really faded, as is the rear sunshade (it's not a spoiler!), but the decals are available on the aftermarket. I'll hold off on those until I decide if it needs to be painted or not.

And IF I paint the car, all the glass and interior trim is coming out, and almost everything that bolts on to body (mirrors, bumper covers, etc) will also come off so the new paint job can be properly done. I already have new gaskets to hold the windows in. One is a high-quality reproduction, and the others are NOS parts. 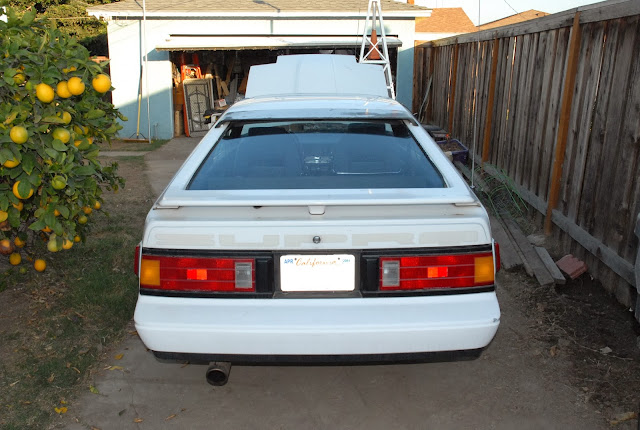 NO rust where the spoiler attaches to the hatch, a common point of rust on these cars: 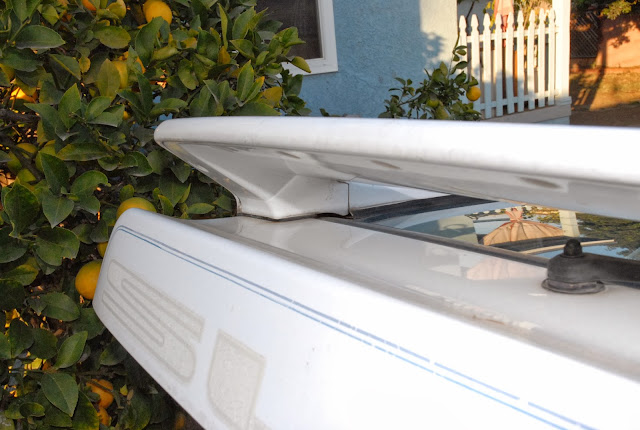 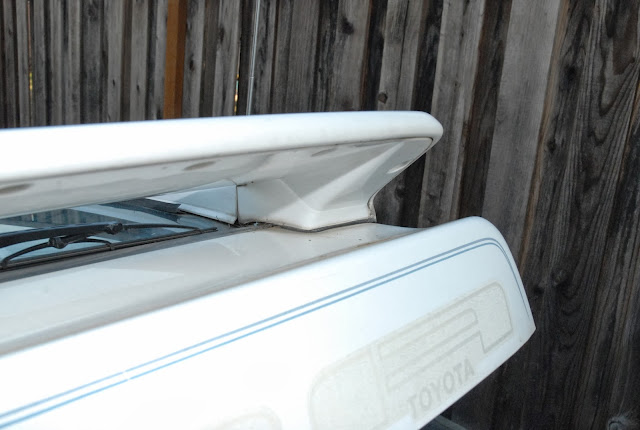 The bottom of the hatch is also clean, a very common "rust out" point on these: 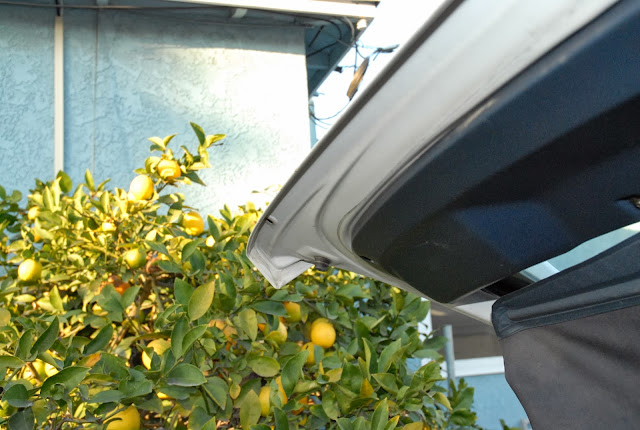 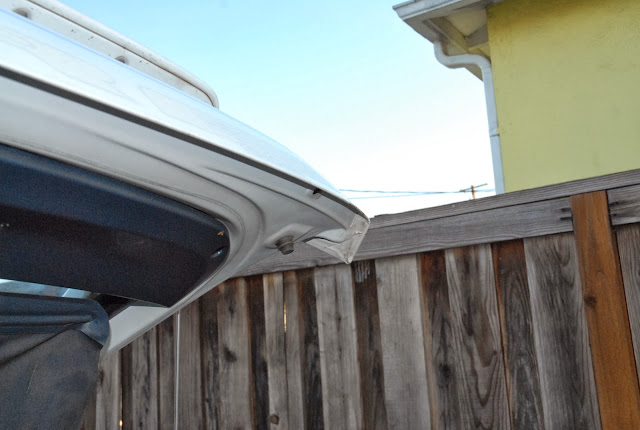 The inside it quite good, considering most of these cars from here on the West Coast have the dash pads all cracked and split: 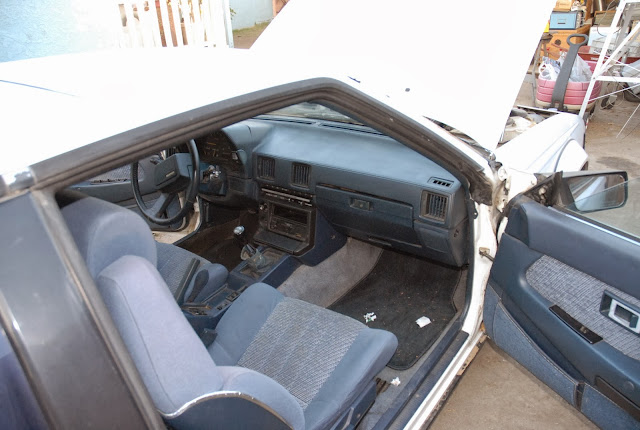 The carpet on the driver's side has some extreme discoloration, so I'm not sure if I'll try cleaning it, or of it will have to be replaced. I have to pull the driver's seat and door sill to fix the gas door/rear hatch release mechanism where it came loose from the floor, making it a bit inconvenient to get the gas filler door open. I'll price out new carpet before that, as I want to pull the seats and console anyway to do a deep cleaning of the interior.

I originally wanted to get the seats recovered with leather, but man, these fabric seats are just soooo comfortable compared to the leather ones in my Jeep, that I'm thinking I'll just save that money, and clean these  really well while they're out. The chrome plastic trim you see around the seat backshell in the above picture is cracked on the passenger seat, and a chunk is missing on the driver's seat, but that's an aftermarket item (about $25 for both seats) that's on the way, and is more easily replaced while the seats are out.

And the shift lever boot and center console armrest are in deplorable condition and need to be replaced and recovered.

I've got a two page list of things I need to fix, like all the interior lights are out except for the radio and instrument cluster, the power antenna is either jammed or miswired to the radio, the rear speakers don't work, and the front ones sound terrible, and so on, but they're all pretty minor compared to RUST and major mechanical problems.

It has new clutch master and slave cylinders, but the clutch doesn't fully release, so they either weren't properly adjusted, or bled, or both.

But it shifts smooth, brakes great (no pulling or noise), goes straight with your hands off the wheel, idles smooth, and pulls like a freight train that's running behind schedule and driven by an Engineer with a hottie waiting for him at home!

And in a sly kind of way, I reminded my wife that all the crawling around, stretching for things, moving equipment around, and keeping busy in general, will help me to lose weight.