Now that I’ve covered pliers, I’ll go on to ‘screwdrivery’ things.
BTW, if you think I’ve missed any tools, or have a favorite in the categories I’m covering, please let me know, and I’ll include it in an update to this.
A good set of screwdrivers is essential for living our day-to-day lives. Just witness how many are stored in the “junk drawer” in your kitchen! If you’re at all serious about working on cars or guns, you already have a good set of screwdrivers, both flat-blade and cross-point. While most electronics items can be taken apart and reassembled with the smaller versions from your existing tool box, there are times when you’ll need what’s commonly called a Precision Screwdriver.  These tend to be more slender in comparison with the smallest ones you’ll find in your tool box, and the better ones have a handle with a rotating knob on top so that you can hold the top, while spinning the body.

Wiha makes excellent small screwdrivers, and I’ve been using them for years. They’re not cheap, but if you don’t lose or abuse them, you’ll have them for life.

Besides flat-blade and cross-point, you can also get them with hex, Torx, PoziDriv, and “ball driver” ends in standard and metric sizes.

Wiha has all their offerings here:
http://www.wihatools.com/

A WORD ABOUT SCREW HEADS AND SCREW DRIVE TYPES

A while back I had an article about the different types of screw heads. Everybody is familiar with the type that takes a flat-blade screwdriver to turn (“Slotted”), and everybody has used cross-point (“Phillips head”) screws,  along with hex (“ALLEN head”), and Torx (“star”).
http://en.wikipedia.org/wiki/Screw_drive

And for all the different types of Screw Head shapes, here’s the entry for that.

Nutdrivers are one of those great inventions that you won’t realize how handy they are until you’ve used them a few times. Then, when you don’t have a set handy, and have to dig out your ¼” drive socket set, and fumble around for some loose bits, you’ll wonder how you got along without them. This is especially true if you do a lot of radio work like I do.

I like the complete sets from Xcelite, as shown below. 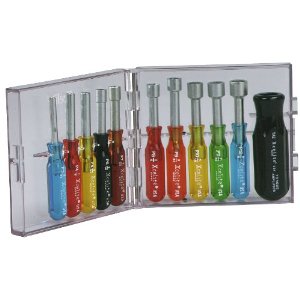 I’ve been using a set like this since high-school, and if you buy a new set today, they look, feel, and even smell like the ones I’ve been using for 40+ years now. There’s something about the plastic handles that has a very “distinct” odor. When I bought a new set a few years ago and opened them up, I was right back in Mr. Shaw’s Electricity Shop class!
Get both the standard size, and the metric size, and you’ll be set for years.

I’m convinced that ball drivers are one of the better inventions in the tool world. If you’ve never used one, and then somebody loans you a set, you’ll be running out to buy them as soon as you return the loaned set.
Basically, they’re a hex driver with the end ground into a “ball” shape so that you don’t have to insert the tool straight into the screw you’re trying to turn, as shown in the picture below. 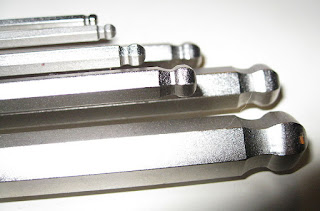 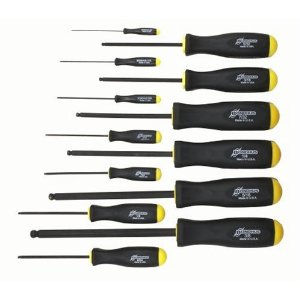 They work amazingly well for getting at socket head cap screws in odd positions where you don’t have a ‘straight shot’ at the top of the screw.
A few years ago I saw the regular L-shaped “Allen keys” with the ball end on both the long and short legs of the wrench, and it was one of those “Why didn’t I think of that?” moments.

As usual, get both a standard set and metric set, and buy good ones. Cheap ball drivers will have the “ball” break off, leading to a stupefying amount of labor to get the busted ball out of the screw!

Bondhus makes nice sets, and you can get their catalog here:

IF you do a lot of radio work, you’re going to need a set of “tuning tools”. These are plastic shafts with hex or screwdriver type ends. Some of them will have a small metal blade so that the plastic doesn’t get chewed up when you run across a stuck slug in a coil or a stuck variable capacitor. The reason they’re made out of plastic, is that if you sick a metal hex tool down into a coil slug, it will alter the inductance of the coil, making it impossible to tune.
The same goes for trying to adjust small “trimmer” capacitors. A metal tool held by your hand will add enough capacitance-to-ground to throw off the circuit, making it very difficult, or impossible, to tune properly.
GC Electronics makes good kits of these, and you can get them direct, through Amazon, and probably eBay. I’ve had mine for so long that I haven’t had to replace them, so I’m not up on where to buy them, other than my favorite little Hole-In-The-Wall electronics store. Radio Shack *used* to sell them, but I can’t find them on their website. 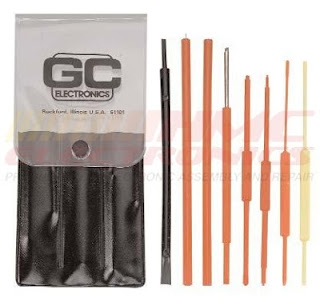 Xcelite also makes a nifty set of hex drivers, and spline and Bristol  drivers (VERY handy for Hallicrafters and Collins Radio work!) that look like these: 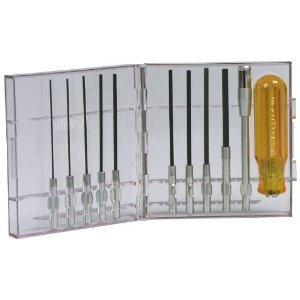 The spline and Bristol driver sets looks identical, except the shaft of the bit is spline-shaped or Bristol-shaped, rather than hex.
Yes, you can use the hex drivers (“Allen Keys”) that look like the letter “L”, but these are far better for getting into tight spots, and have a much longer reach.
Again, get both the standard and metric sizes. Bristol is a world of it’s own!

One tool which I came across is a specialty tool used to remove the circular knurled nuts that hold things like switches or phone jacks to panels.  You can get them in different sizes, so be sure you know what size you’ll need, or you’ll wind up with multiples of the same size, like I have.

Here’s what they look like, and this one is from Stewart-MacDonald Company, a place that sells tools for stringed instrument repair. 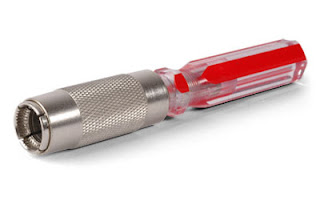 The most common screw starters are the ones that have a “split blade” which wedges the blade into the slot on the screw, like below: 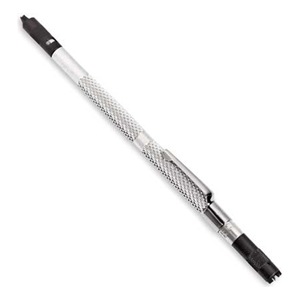 This one will do both slotted and cross-point screws. One tip I’ve used in the past has been to put a piece of double-sided tape on the end of my finger, and stick the nut/screw to it.

Heathkit and Knight-Kit used to include a nice little plastic tube that would hold small hex nuts while you inserted the screw from the other side. I had a pair of these, but lost them quite some time ago. In a pinch, you can use a length of heat shrinkable tubing that fits the nut, although that starts to get expensive if you have a lot of small hex nuts to install.

That’s it for this installment. Next time I’ll cover soldering and desoldering.