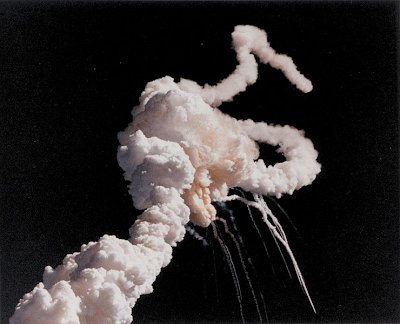 The American space program lost it's innocence.
I was working for Hughes Aircraft at the time, and one of my friends answered a phone call, said "WHAT?!?", and turned ash-white. His mother had been watching the launch on TV, and immediately called him with the news that Challenger, STS-51-L, had been lost. A few minutes later there was an announcement over the P.A. system saying that Challenger had blown up in flight, and we were asked for a moment of silence.
I watched the news coverage that night and couldn't believe my eyes. How had this happened? What caused the failure leading to the loss of vehicle and crew? Since I was working on Really Neat Stuff at the time, I knew there were mountains of paperwork for all the hardware involved that had to be checked, double-checked, cross-checked, and signed off by several people, and then checked again by the people in Quality Control before the equipment could be moved to the next step in processing. If all the steps were done properly, a "defective" unit had very little chance of moving beyond where it was, let alone getting out the door. We used to joke that the equipment we shipped was half worn out from the testing we did to it!
So what really went wrong with all this highly inspected and tested hardware? How did "bad" equipment get out the door? Simply put the equipment was fine, but it was being asked to operate well outside its design parameters. Even with evidence from previous flights that this was a Bad Thing to do, the Engineers who sounded the warnings were overruled, and the launch was allowed to proceed.
The "what" that caused the launch failure was determined quite quickly (too cold, O-rings lost flexibility, hot gases escaped, etc), but the "why" took longer. I think the most telling thing was when some high-level manager had told his Engineering team to "Take off you Engineer's hat, and put on your Manager's hat". I was floored when I heard this, as a good manager will listen to their staff, and back them up when required. This was obviously a case of management deciding what was "best" and ignoring the pleas of their staff to hold the launch until the weather warmed up. Previous flights where it was 10 degrees WARMER than current conditions had shown that the O-ring seals in the Solid Rocket Boosters had a *known* problem with low temperatures causing them not to seal properly. Thiokol's engineers, and Roger Boisjoly in particular, had documented this problem, and were repeatedly ignored, leading to a disasterous result.
Posted by drjim at 9:36 AM