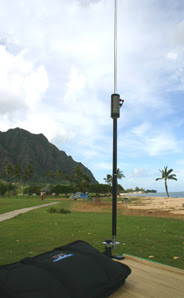 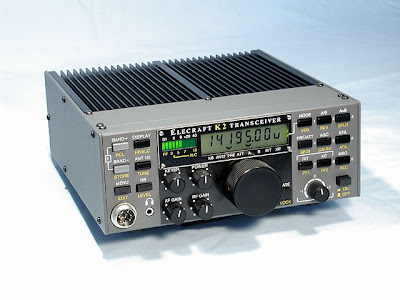 A little belated, but best wishes for all!
Spent last night "playing radio" out in the girlfriend's back yard. I was running my Elecraft K2, and my BuddiPole converted to a BuddiStick configuration for the first time. Talked to several guys back east (Missouri, Louisiana, Indiana), a couple more out West (Colorado and Wyoming), and had a nice chat with a guy in Honolulu.
Not bad for 10 Watts to a "portable" antenna! My signal was up-and-down, so one of these days I'll finish up the 100 Watt amplifier for my K2. The rig shown has the amplifier installed as part of the black, finned heatsink that comprises the top of the radio. Mine has a gray cover with the speaker in it, and that gets replaced by the amplifier assembly. Running "10dB down" from 100 Watts makes for some challenging contacts on Single Sideband, but I had no problems hearing stations. The K2 has an outstanding receiver, but 10 Watts is marginal for casual use down at the bottom of the solar cycle like we are right now. If we had been doing Emergency Communications, then the other guys would have been "listening harder" for us, and not just cherry-picking the stronger signals to talk to.
Posted by drjim at 1:30 PM