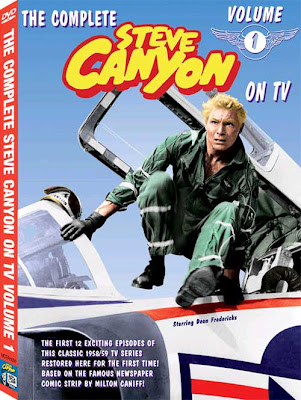 Guess I'm showing my age, but this was one of my all-time favorite TV shows when I was just a little sprout. I also waited in anticipation for "Science Fiction Theater", and Col. McCauley's "Men Into Space", but I'll always remember certain Steve Canyon episodes, like "The Gift", and the all-time highest-rated episode "Operation Intercept".
Well, Volumes 1 and 2 arrived today, and I'm having fun reliving those nights of my childhood!
I think the appeal these shows had for me, other than the guys were doing Really Neat Stuff(tm), was that the actors portrayed my idea of how Real Men lived their lives. They were cool under pressure, had high morals and standards, always did the right thing, and won out over adversity and evil. In short, they were role models, and I aspired to be like them. My Dad was in the SeaBees during WWII, and taught me great respect for our men and women in the military. He didn't talk much about his time in the service, but he had a box full of ribbons and medals that my sister has now. When I was little, he bought me my own copy of The Bluejacket's Manual, as he thought it would serve me as well as it did him. I've long since mislaid my copy, but hopefully some of what I read at that early age has stayed with me. My Dad pretty much lead by example, just like the guys in the TV series did, and that's probably another reason I connected with them.
If you're interested, cruise on over to "Steve Canyon on DVD", and enjoy! These are fully-remastered DVD's, made from the original 35mm films, and are extremely good quality, and fully authorized by the Milton Caniff estate.
Hmmm....pass the popcorn, please?
Posted by drjim at 6:22 PM