No party pix, but here's a few of the vertical in the backyard.

Yes, the installation is "Pebbles Approved". 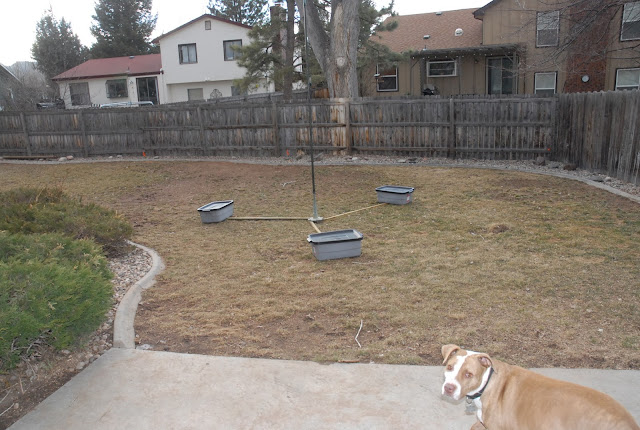 Each one of the grey tote boxes has a 50lb bag of sand in it.  I have another tote that size with the SGC-230 autocoupler in it, and a smaller one with the line isolator in it that's also my junction box for power to the SGC-230. I still have to fabricate some radials from the YUUUGE spool of #10 THHN wire I bought years ago, and then install the coupler, radials, and cabling. Monday will be very interesting, as we're expecting sustained winds of 30~37MPH with gusts to 50MPH. I'm expecting it to do some scary gyrations, and I'm sure I'll be lengthening the legs.

As of 2022 local time, and I can hear the wind really blowing. Flipping on the yard lights, the whip is flexing about 30* in the gusts, and the base looks stable.

It's actually pretty "plumb". The apparent tilt to the whip part is caused by the whip being deflected by the wind. 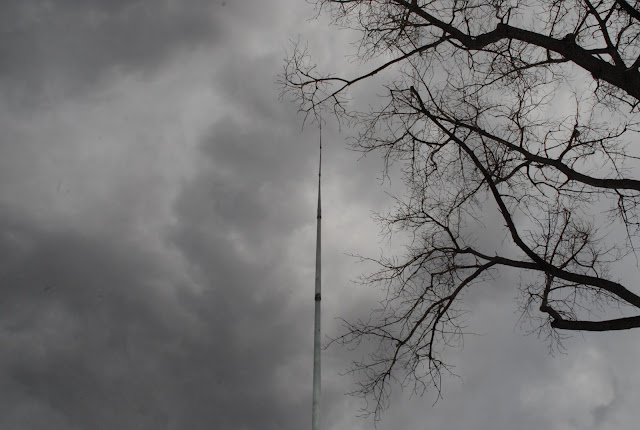 This thing is FLEXIBLE! What looks like an "S" bend in the whip is the antenna reacting to the wind. I've seen photos of the antennas bend over at what looked like 90* in 100MPH winds.

And one last one from the far corner of the lot. 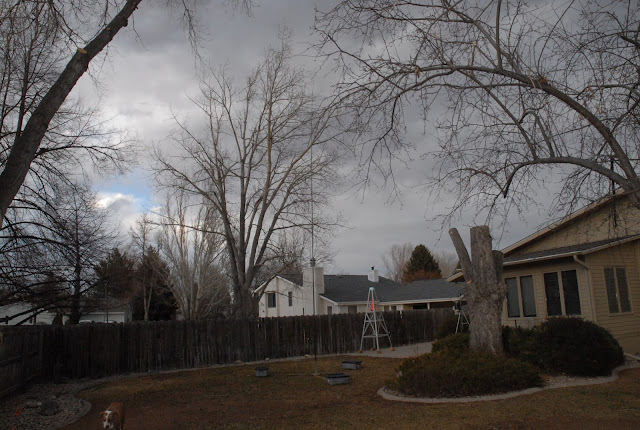 The "windmill" tower in the background is for my satellite antennas, seen here many times in the past. I haven't decided where I'll site that system for its permanent spot. The tree trunk will get carved a bit later this year. And peeking out from behind the tree trunk, is the 5' tripod with the Davis Instruments sensor suite on it for my "real" weather station.

The snow is 99% gone, except for some patches on the North sides of houses, and the yard has dried out enough to walk through it without getting 10 lbs of MUD on your shoes! It shouldn't be any where near this bad next year, as our landscaper/yard guy is going to start seeding and feeding at the proper time. He says he's seen yards here in worse shape than ours, and with some fertilizer, and the right type of grass seed, they bounce back in one summer. The snow here doesn't bother me, but the mud does!

And our grandson's first birthday party was a smashing success!

Besides the 16 family members, we had another 8~10 people drop by, including three of his neonatal nurses, and several work friends and their little ones.

The little guy made out like a bandit, and he now has "doubles" on some toys between here, his parent's place, and his other grandparents place! And he got real silver dollar from his Grandpa Jim to put away for a rainy day.

And the best part? After things wound down and it was only immediate family, everybody just pitched in, and we had the house clean and back in order in a very short time.

All in all, a VERY pleasant day spent with family and friends.

As of 1400 local time, the vertical is still standing, the base shows no signs of movement, but the Tip 'O The Whip is swinging back and forth through what looks like a 45* angle.

One minor casualty occurred during the night. One of the black lids wasn't fully snapped on to the tote box, and is now laying against the fence. I'll put it back on the tote, and put a couple of cable ties on it and it's mates to keep the lids on the boxes......
at March 04, 2018